This is a critical week in the U.S. Congress. The House will vote on a bill that could have negative impacts on the quality of waterways in our nation for years to come. With the most anti-environmental Congress to date currently in charge, today is a big day for clean air and water. By a narrow margin, the Senate voted against a bill that would take away power from the U.S. Environmental Protection Agency. 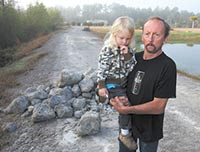 Steve Johnson and his daughter on his coal-ash-covered driveway

On the House side, there will be a vote on the floor of the House about “a motion to instruct conferees” to include a rider that would freeze the U.S. Environmental Protection Agency’s public rule-making on coal ash storage and disposal. EPA’s rule-making does not cover the use of coal ash in construction and is therefore not relevant to the final Transportation bill, but coal industry allies have been making false claims that coal ash regulation will influence highway construction. Rep. David McKinley of West Virginia has been the leading the charge on this front.

Email your congressional representative today to ask them to keep coal ash out of the Transportation Bill.

Coal ash is the leftover remains from burning coal and is often disposed of in unlined, wet impoundments. Improper storage of coal ash can leak heavy metals like selenium, arsenic, and chromium and other contaminants into groundwater.

The numerous problems with improper storage of coal ash are well documented. We need a science-based approach to managing coal ash disposal and storage, not political wrangling to allow polluters continue business-as-usual.

Email your Congressional representative today to ask them to vote against the coal ash bill.

A narrow victory for clean air and water in the Senate:

On the Senate side, members voted on Senate Joint Resolution 37 today. A slim majority (53 senators) voted against the resolution. Introduced by Sen. James Inhofe from Oklahoma, the resolution would have nullified the U.S. Environmental Protection Agency’s Mercury and Air Toxics Standard. For years the coal industry has made empty promises to clean up its act, but now that the Mercury and Air Toxics Standard promises to do just that, the coal industry has cried foul. 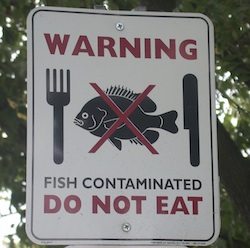 The EPA finalized the Mercury and Air Toxics Standard in December of 2011. Over 900,000 Americans commented on the rule, mostly in favor of stronger protection against air pollution. By reducing the amount of heavy metals streaming from the smokestacks of coal-fired power plants, this rule will improve the health of our air and water, and therefore benefit human health.

Many streams in the Southeast are not safe for fishing due to high levels of metals accumulating in the fish. The mercury rules will promote cleaner water and healthier fish for communities.

It is no secret that dirty coal money has influence on political figures. Although the bill did not pass today, 46 senators voted in favor of reducing healthy protections for Americans. Thanks to the 53 senators who supported the Mercury and Air Toxics Standard, clean water and healthy communities are a realistic vision for tomorrow.

Thank you to those who called your senators to show your support for clean water.