Editor’s Note: We have long featured our region’s fantastic places and phenomenal hikes in the “Hiking the Highlands” column. What we have less frequently focused on, however, is how some of our favorite places were protected in the first place.
Non-profit land trusts are committed to the preservation of our region’s natural heritage and scenic beauty. And, most importantly for this column, they protect ample acreage for hiking and outdoor recreation.

Land trusts understand that to make conservation tangible, they need to get people outside and onto the lands that they protect. With an innovative new program that mixes conservation with a little competition, Carolina Mountain Land Conservancy, a Western North Carolina land trust, is doing just that. We went to Peter Barr, an avid hiker and the Trails and Outreach Coordinator for CMLC, to learn more about what they are doing to encourage the synergy between enjoying the land and protecting it.

Since 1994, the Carolina Mountain Land Conservancy has protected more than 23,000 acres of western North Carolina’s mountains, including the headwaters of the French Broad River, the Blue Ridge Escarpment and Hickory Nut Gorge.

CMLC’s White Squirrel Hiking Challenge — named for the beloved wildlife oddity that can be spotted on some of the conservancy’s protected tracts — invites members of the community to get out on protected lands and discover the value of conserving the amazing places in the southern Appalachian Mountains.

Whether you’re an experienced outdoors enthusiast or new to the wonders of nature, the idea is that once you experience these special places for yourself, understanding that they’re protected forever, you will become a conservationist for life.

By completing eight hikes on CMLC’s most spectacular conserved lands, finishers will earn a white squirrel hiking patch and bragging rights for land conservation. The real reward is experiencing these amazing places, partaking in a little friendly competition, and supporting their permanent protection.

Please note that while most of the hikes included in the hiking challenge are open to the public, a few are on private land. Landowners generously open their property to hikers but request in return that visitors support land conservation by becoming members of CMLC.
For directions to hike trailheads and to enroll in the White Squirrel Hiking Challenge, visit carolinamountain.org/hikingchallenge.

Two Hiking Challenge outings entail journeys in the popular DuPont State Forest — which straddles Henderson and Transylvania counties — and celebrate CMLC’s origins following the movement to protect the forest in the 1990s.

The “Tour de Falls” hike requires hikers to reach three of DuPont’s popular waterfalls: Hooker, Triple and High Falls. The three falls—among the most beautiful in the region—can be reached with a round-trip hike of less than three miles.

Another hike, a two and a half mile jaunt to the summit of Stone Mountain, makes up for the ease of the waterfalls tour. But the climb up a steep trail rewards hardy hikers with panoramic views from the top of one of DuPont’s scenic granitic domes.

Once imminently threatened by development, the forest’s abundant natural beauty is now adored by hikers, cyclists and equestrians alike. A grassroots coalition of conservation supporters in the 1990s ultimately saved DuPont and facilitated its purchase by the state of North Carolina to become public land. CMLC’s support of the forest’s conservation was one of its first land protection initiatives.

CMLC protects DuPont to this day, by buffering its borders with private conservation easements and facilitating the acquisition of additional land — including 65 acres added to the forest in April. 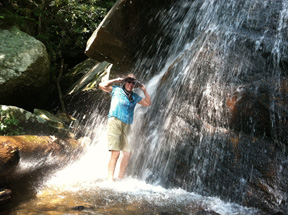 Tucked away in a hollow within Henderson County’s Green River Preserve, Uncles Falls requires a hike of only two miles round-trip. Totaling more than 3,000 acres, and one of the largest private conservation easements in western North Carolina, the preserve is home to a co-ed summer camp that thrives on experiential learning by connecting kids to nature.

More than 2,600 acres of unspoiled forests and rugged mountain slopes at Green River Preserve are conserved by CMLC — including the headwaters of the Green River. Summer campers use Uncles Falls for a ritual of initiation during their stay — jumping underneath the cascade with their clothes on and shouting the words “polar bear” three times. While the ritual is not a requirement of the Hiking Challenge, it is highly recommended for an invigorating extra dose of nature.

A three-mile hike within CMLC’s Florence Nature Preserve in the Upper Hickory Nut Gorge parallels pristine mountain streams, traverses old growth forests and features historic mountain home sites. The Preserve was donated by the Florence family in 1996 and CMLC has retained ownership ever since, maintaining a five-mile network of public hiking trails on its 600 acres.

One of the largest remaining privately-owned tracts of land in the southern Appalachians, the East Fork Headwaters property hosts miles of trout streams, rare mountain bogs and federally endangered plants and animals. Its permanent protection is still a work in progress — to date, nearly 800 acres have been put into conservation ownership. For the Challenge, hike four miles along the venerable Foothills Trail — a long-distance hiking path which traverses the Blue Ridge Escarpment on the border of North and South Carolina. 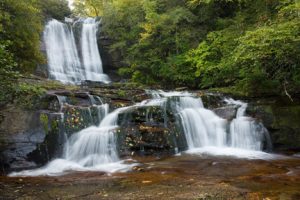 A hike to Transylvania County’s Connestee Falls — quite literally a walk in the park — is the easiest in the Challenge and illustrates that not all beautiful natural features require a grueling trek to find enjoyment. A new wheelchair accessible boardwalk, compliant with the Americans with Disabilities Act, stretches fifty yards from the parking area on U.S. 276 south of Brevard, N.C., to an overlook platform that offers views of three picturesque waterfalls.

Connestee Falls, one of the region’s most popular cascades, and Batson Creek Falls converge to form a third falls known as Silver Slip. All three waterfalls are part a conservation easement obtained by CMLC, which also facilitated the property’s purchase by Transylvania County and its establishment as a county park.

Bearwallow Mountain may be the crown jewel of the White Squirrel Hiking Challenge. The hike ascends a one-mile trail — constructed by CMLC with the help of volunteers — to the summit of a 4,000-foot mountain on the Eastern Continental Divide. The peak hosts an expansive grassy meadow that offers a near-360 degree view to reward hikers who make the short climb. A CMLC conservation easement protects 81 acres atop the peak to date and CMLC is working to conserve nearly 400 more.

The trail up Bearwallow Mountain is part of a developing network of trails in the Hickory Nut Gorge that will link a growing network of conserved lands — including lands protected by Southern Appalachian Highlands Conservancy and Chimney Rock State Park. Ultimately, the network will encompass more than 50 miles of trails and span the length of the breathtaking Hickory Nut Gorge. 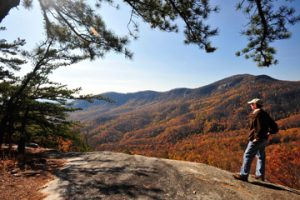 Ken’s Rock, an impressive cliff on the west face of Youngs Mountain near Lake Lure, can be reached by just a half-mile hike. Located on private property, the landowner permits access one to two weekends a month for hikers that support land conservation. The dramatic view from the rock includes Weed Patch Mountain, a 1,500+ acre tract purchased by CMLC from bankruptcy court following failure of a gated housing development. The Weed Patch tract is contiguous to part of Chimney Rock State Park; CMLC and the Town of Lake Lure are developing an extensive hiking and mountain biking trail network on the property.