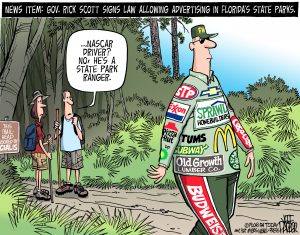 The American spirit is tied to the land, to “purple mountain majesties” and the pioneer’s self-reliance. Our relationship with the natural world has always been a balancing act between the drives of conquest and extraction and an instinctual dependence, curiosity and respect.

When we fail to guard our public lands against those who would tilt that balance into the deep pockets of a greedy few, we are selling out the American spirit. Supporters of big industry try to decry the very presence of public land, implying that the word “public” violates our freedom. That couldn’t be further from the truth — the public is us, and this is our land.

The American Legislative Exchange Council — the ultra-conservative lobby group that championed mandatory IDs for voters and launched preemptive attacks on regulation of coal ash — has set its sights on reducing protections for public lands. ALEC is behind proposals that would benefit extractive industry by transferring ownership of federal wilderness areas to states, undermine the president’s ability under the century-old Antiquities Act to establish national monuments, and roll back the Endangered Species Act.

A slew of bills would impose costly penalties for groups or individuals that challenge leasing and drilling decisions on public lands. Extractive industries claim their access to public land is unfairly restricted, even though they have more public land than they need — over 20 million acres of federal land leased by these industries are unused.

Legislation was also introduced this spring, ironically called the Sportsman’s Heritage Act, that claims to open wilderness for hunters and anglers, but would actually lead to the intrusion of more roads and logging in wild areas that are already open to hunting. Opponents to the bill see it as a petty attempt to divide hunters and conservationists and prevent them from standing up for their shared resources.

Yet if there’s one thing Americans agree on, it’s the protection of our public lands, even if some of our elected officials don’t understand the land’s value.

Undeveloped public lands help to clean our air and water, and provide economic boons to municipalities across the country via recreation and tourism. Americans have a public covenant to protect our remaining wild places for future generations.
Championing the short-term wishes of corporate power brokers over long-term needs to protect our health and local communities means that profit wins out over humanity.

It’s up to us to determine whether this is the moment in history where our natural heritage is sold to the highest bidder or where the voices of the people unite to protect our public lands.