Last Stand for the Southern Spruce-Fir?

Ancient Mountaintop Species Are Most Vulnerable As Appalachia Warms 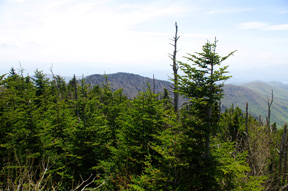 As temperature rises, it could change everything from fog frequency to soil properties. The resiliency of red spruce and Fraser fir, such as these on Clingmans Dome in Sevier County, Tenn., will affect the forest’s rare inhabitants. Photo by Brian Stansberry

At the nonprofit park atop northwestern North Carolina’s Grandfather Mountain, Director of Education Jesse Pope surveys the park’s cold-loving plants, keeping an eye out for the brassy Weller’s salamander and small Saw-whet owl, two of the many creatures that depend on the mountain’s cool climate. Pope is monitoring how Southern Appalachia’s high elevation red spruce and Fraser fir respond to rising temperatures. These high-elevation forests — remnants of the last ice age that require a similar climate to forests much farther north —are essentially islands in the sky. If temperatures continue to climb, residents of these habitat islands have nowhere to go.

Though this year’s balmy winter alone doesn’t signify climate change — the term “climate” refers to weather patterns over long periods of time — the fact that April 2012 marked the end of the warmest 12-month period since 1895 means that recent weather can help people imagine what a new climate norm in Appalachia might look like. Nine of the ten warmest years since 1880 have occurred since 2000, and 2012 is on track to set a new record.

These measurements are consistent with a consensus of three key facts by international climate scientists: the Earth’s surface temperature is rising; widespread climate-related impacts are occurring now and are likely to increase; and it’s more than 90 percent likely that humans are responsible.

Scientists agree that Southern Appalachian forests will be warmer in the future, but detailed projections future climate are fuzzy because rates of greenhouse gas emissions are uncertain.

Ironically, some forms of pollution might be sheltering Appalachia from experiencing the climate impacts that are already visible in some other parts of the country. Dr. Steve McNulty, an ecologist with the Eastern Forest Environmental Threat Assessment Center, says that the airborne sulfate aerosols that were coming into the Southern Appalachians from power plants in the Midwest kept sunlight from coming in and warming the South in the same way that a leafy tree canopy provides cool shade on a hot day. Unlike carbon dioxide, which traps heat in the atmosphere, sulfur aerosols reflect sunlight back toward space.

Since the passage of the Clean Air Acts in the ‘90s, sulfate aerosols have decreased, so most of the South is beginning to warm up like the rest of the country. But according to Dr. Howard Neufeld, a biology professor at Appalachian State University, the Southern Appalachians haven’t seen this temperature increase yet, possibly because aerosols naturally emitted by trees are reflecting radiation out of the atmosphere the same way sulfate aerosols did in the past.

A Saw-Whet owl peers out of a nesting box on Grandfather Mountain, N.C. Photo by Jesse Pope

While the Intergovernmental Panel on Climate Change accepts higher average temperatures as inevitable, some research models for Appalachia predict an increase in precipitation and others tell of impending drought. Much of this uncertainty centers around clouds. How temperature affects cloud height and cloud type, and whether clouds form more or less frequently, could influence everything from stream flow to plant health.

Clouds have added significance for Appalachia’s most vulnerable ecosystem, the high elevation red spruce and Fraser fir forests that cling to the coolest locations in the southern mountains. According to Dr. Neufeld, the spruce and fir trees that anchor these ecosystems have a harder time drawing water up their trunk than hardwoods do. The moisture in fog gathers on the conifers’ needles, forming droplets that run down the trunk to provide about a third of the tree’s hydration. If climate change causes clouds to rise, these trees risk losing a key water source while suffering increased exposure to the sun’s drying rays.

Southern Appalachia’s spruce and fir forests are home to numerous rare and endangered species dependent on these old growth sites. The extremely endangered spruce-fir moss spider, one of the world’s tiniest tarantulas, lives only in moss mats found in a few of these high-elevation coniferous forests. A subspecies of northern flying squirrel that dines on a truffle from red spruce roots has been genetically isolated in the region since the glaciers receded about 10,000 years ago.

As the continent warmed after the last ice age, the South’s spruce and fir migrated upward in elevation. A journey to the summit of Grandfather Mountain in North Carolina follows the conifers’ path. The forest changes from leafy hardwoods lower down to a mix of hardwoods and spruce. Above 5,000 feet, spruce and fir take over; if Grandfather were as tall as nearby Mt. Mitchell, Fraser fir alone would dominate above 5,800 feet. According to Pope, regional researchers estimate that a two-degree increase in temperature could shift forest zones upward by 1,000 feet. Depending on the degree of warming, firs, and maybe even spruce, could be pushed off the top of the mountain. 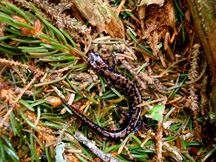 Careful observation of how spruce at the southern limit of their habitat respond to warming will be helpful for land managers in the Central and Northern Appalachians, Pope says. The climate change prognosis is better for spruce in Central Appalachia because the trees have access to northward migration corridors.

Conservationists with the Central Appalachian Spruce Restoration Initiative, a partnership between public and private organizations, are trying to restore the vitality and connectedness of these crucial forests, says Dave Saville, program coordinator for the West Virginia Highland Conservancy’s spruce efforts. Red spruce once covered 500,000 acres of West Virginia, but logging, surface mining and development have reduced the forest to just 10 percent of its former range. Focusing on spruce habitat preserves the refrigerator-like microclimate that so many species depend on and protects spruce forest soils, which sequester a staggering amount of carbon that is released into the atmosphere when the soil is disturbed. 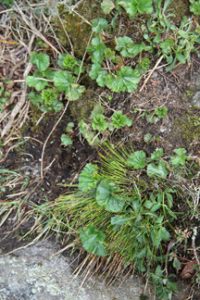 The ancient spreading avens lives on sheer cliffs; it’s most common known cause of death is being crushed by falling ice sheets. Researchers don’t know whether the plant is still reproducing. Photo by Molly Moore

It’s not just conifers that depend on cool mountain environments. Back in North Carolina, Grandfather Mountain is home to several heath balds that support federally threatened wildflowers such as Heller’s blazing star and Blue Ridge goldenrod. The mountain’s sheer cliffs are one of just 11 sites in the world that support an ancient endangered plant called spreading avens, a nondescript member of the rose family that lights up with yellow blossoms in mid-summer. Pope observes the plant’s colonies on Grandfather attentively, but in five years he has not seen any new sprouts on the mountain.

In addition to species monitoring, Pope contributes to an international climate database through an Appalachian State University program. Special equipment, provided by a NASA grant, enables Pope, and park visitors, to measure data such as incoming solar radiation, density of particulate matter in the atmosphere, temperature and precipitation.

Making measurements and observations to generate strong baseline data is critical, says ASU’s Dr. Neufeld. He cites ecologist R.H. Whittaker’s work to delineate and document sections of forest in the Smokies in the 1950s. Whittaker’s careful notes on the forest flora allow today’s researchers to see how these parcels of forest have changed over the past half century.

Getting everyday people involved in climate monitoring is one way to gather this baseline data. Dr. Rico Gazal, a professor at West Virginia’s Glenville State College and a master trainer with an international citizen science program, is tracking the budding dates of yellow poplar trees in West Virginia with the assistance of his students and local volunteers. Gazal has also trained over 100 teachers to engage their classrooms in the project. He notes that because this type of research doesn’t require any special equipment, it is easier to involve the public.

Gazal’s study is inspired by collaboration with scientists in Japan who have 60 years of data detailing when the leaves of Japanese ginkgo trees bud and fall. Seven years into his yellow poplar project, Gazal’s findings are consistent with those of the USDA — the growing season is getting longer. This extended growing cycle, he says, affects factors like the amount of water forests need and the timing of soil nutrient cycles that rely on leaf fall. Naturally, as the growing season lengthens for yellow poplar, it also lengthens for invasive plants and pests such as multi-flora rose and the balsam wooly adelgid. Citizen observation and satellite imagery provide scientists with valuable data that helps forest managers prepare for greater climate change.

Planning for the Unknown 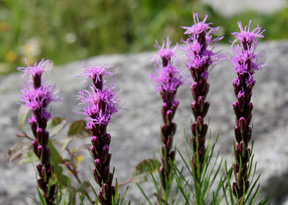 Heller’s blazing star is one of the endangered wildflowers found in high-elevation heath balds. Scientists speculate that these ecosystems depend on occasional fires to keep invading plants at bay. Photo courtesy of Grandfather Mountain Stewardship Foundation

Integrating research from different forestry disciplines helps researchers understand how seemingly separate factors, such as invasive pests and air pollution, can interact. Between 1998 and 2000, a severe drought led to a spate of spruce deaths in the high elevations around North Carolina’s Mt. Mitchell. Dr. McNulty led a crew to investigate.

The group discovered that southern pine beetles, which usually live at lower elevations, were killing some of the spruce. The trees in trouble were some of the largest, healthiest-looking specimens. Research revealed that acid rain was depositing high levels of nitrogen in the soil. Nitrogen acts as a fertilizer, allowing plants to grow more vigorously aboveground while expending less energy developing deep roots. When drought struck, the trees with more needles and shallower roots struggled more than the scraggly trees and couldn’t produce a healthy amount of resin due to lack of water. The same drought also made the spruce-fir environment hot and dry enough for the southern pine beetle to make its way to the mountains and attack the spruce. Because the scraggly trees with poorer soils had deeper roots and were more resilient to drought, they were able to repel the beetle with resin. The healthier-looking trees that weren’t producing enough resin succumbed to the combination of drought and insect attack.

To McNulty, scenarios like this are the most troubling to climate scientists because they combine multiple factors in unexpected ways, making it difficult to plan. As he explains, there are some “knowns” that forest managers can plan for. “If it gets hot and dry we know there are going to be more wildfires so we can sort of plan for that. There are species we can plant that are better adapted to wildfires,” he says. “Then there are unknowns that we may not understand but at least we can ask the question. For example, would increased atmospheric CO2 actually make plants grow faster?” There is research that points both ways, he explains.

“What we can’t quite do yet and what we’re working on are these ‘unknown unknowns,’ these surprises associated with climate change that might actually have the biggest impact because we’re least prepared to handle them,” McNulty says, citing the red spruce deaths on Mt. Mitchell as an example.

McNulty likens decisions by forest managers about whether to spend limited resources protecting threatened spruce and fir ecosystems to decisions that people make about their own health care. Medical bills are often highest at the end of someone’s life, and spruce-fir ecosystems have been shrinking since the last ice age. Climate change will hasten the pace of warming, he says, but “eventually, with or without climate change, these ecosystems will likely disappear in the Southern Appalachians.”

Neufeld agrees that some changes are inevitable. “I think people just have to get used to the idea that [natural] communities are dynamic,” he says. “There won’t be bare slopes with nothing on them. Something will come in and colonize them.”