I had the amazing opportunity to be on a team of students at Appalachian State University that has been working over the past school year to create a miniature wetland to install in the local salon Haircut 101. Bobbie Jo Swinson, the project’s student leader, received a $15,000 grant for the project last year from an EPA P3 Phase I grant. The purpose of EPA’s P3 — People, Prosperity, and the Planet — is to inspire students to design sustainable solutions for world issues and bring their ideas into the marketplace.

Our project, Grow Clean Water, was inspired by Bobbie Jo’s work as a hair stylist and her experience watching chemicals from hair treatments lost down the drain. Students from appropriate technology, biology, chemistry, interior design, and sustainable development worked to design the biological graywater system to treat the hair salon water using aquatic plants before being recycled through the salon’s toilets for flushing. Graywater is the water from sources such as baths, sinks, and laundry machines; it is not to be confused with blackwater, which contains fecal matter. Aside from removing contaminants, we also wanted the system to function as living art that would educate the community about recycling graywater.

About 500 gallons of salon water were collected from Haircut 101 and used on eight different species of aquatic plants that had been growing all year for the project. The plants were selected based on their use in other phytoremediation studies and ability to filter water in natural wetland settings. All but 2 of the species are native, the others were donated by the plant supplier. Although we knew the plants had some chemical tolerance, we thought the harsh compounds in the hair treatments would kill them off fairly quickly. Our results were surprising; within a matter of days the plants exploded with color and growth, meaning they were actually thriving off of the salon water, and remained that way for the months to follow.

We traveled to D.C. on April 20 to compete for three days at the EPA’s Sustainable Design Expo with 44 other teams from across the country. Judging was conducting by a panel of national experts, and appearances were made by Lisa Jackson and Lek Kadeli from the EPA. Grow Clean Water won one of the $90,000 grants for Phase II, and a $1,000 award from the Youth Council on Sustainable Science and Technology. Over the next two years, we will use the Phase II award to optimize the system design, install the first prototype into Haircut 101, and search for other applications of the project in the market. A living system is also going to be incorporated into the school’s next home for the Solar Decathlon.

One of the greatest parts of the competition was seeing so much creativity and motivation to solve common global problems. It was also empowering to see that there is a demand for this creativity and a willingness to invest in it; over $1 million in awards was given to student projects that weekend.

Our small project in Haircut 101 will save 35,000 gallons of potable water annually from being lost down the toilet. We’ve also talked about how living systems could be used in laundromats and car washes. What if every small business or home had its own version of a living system? What if we could change legislation so graywater could be reused for more than just toilet flushing or watering a yard? The salon is just one of the activities that is daily bombarding local waters, and it’s important to give attention to all the problems, those as small as the graywater stream from a hair salon and as large as the drainage from a coal mine. 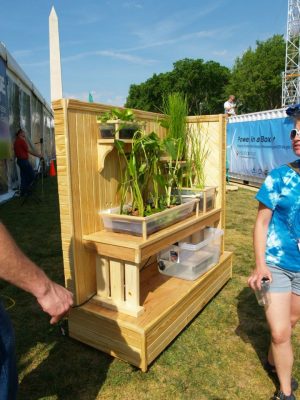 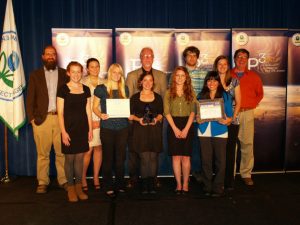 Jillian Kenny is a junior at Appalachian State University and an intern with Appalachian Voices’ Water Team. She does the dirty work of monitoring coal companies’ water pollution records, but her commitment to clean water extends beyond her intern hours.