Too Big to Fail, But Not to Change

When “pink slime” hit the headlines in March, Americans were rightfully disgusted. The thought of being poisoned for profit by beef-product filler treated with ammonia sparked national outrage. Grocery stores and even mega-fast food restaurants such as McDonald’s and Taco Bell were quick to publicly shun the slimy substance. Over the course of just a few days, and a lot of bad publicity pointed at the beef industry, business practices radically changed.

However, there are even more toxic industries that are continuing business as usual. The fossil fuel interests and the financial institutions that help fund them don’t need our consent to poison our bodies and contribute to the growing curse of climate change. They don’t respond to scrutiny the way Taco Bell might either. They don’t need to — they’re the most profitable entities on Earth.

Names like J.P. Morgan Chase, Goldman Sachs and Bank of America might not have the negative connotations that Massey Energy or Exxon Mobil bring to mind, but in some ways they’re one and the same. Without these financial institutions mobilizing capital funding for electric utilities and fossil fuel companies, multi-billion dollar power plants would never be built.

The “too big to fail” institutions operate under the guise of corporate responsibility. J.P. Morgan Chase, the largest investor in coal-fired electricity, claims on its website that they are “Helping the world transition to a low-carbon economy.” Bank of America, the third-largest investor, hypocritically acknowledges that “The most formidable challenge we face is global climate change.”

Both the financial and fossil fuel industries continue to victimize Americans. One fraudulently forecloses on families and even got off scot-free after creating a global financial crisis in a futile attempt to satisfy its insatiable greed. The other enjoys unnecessary subsidies in times of record profit while polluting the air and water. These corporations and their political allies support cuts to essential social programs but complain that closing tax loopholes is “socialism” and “un-American.”

The bottom line is that, while the financial and energy sectors are essential to a functioning economy, they’ve irresponsibly wielded the power we’ve given them by believing that we work for them, not the other way around.

Whether it’s “pink slime,” the financial crash of 2008, the BP oil spill of 2010 or the ongoing destruction of Appalachia by mountaintop removal, millions are voicing their disgust at the lack of corporate responsibility, accountability and foresight. Yet somehow, in a severe case of cognitive dissonance, energy giants and the monoliths of Wall Street think that less government oversight and “self-regulation” is the solution.

In our society’s hunger for endless economic growth, we’re beginning to forget who we really work for — future generations and their inalienable right to every opportunity afforded to us. 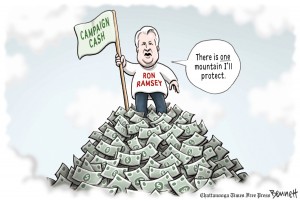 Lieutenant Governor Ron Ramsey recently helped kill a bipartisan bill in the Tennessee state senate that would have banned mountaintop removal coal mining in the state. Ramsey recieved more than $195,000 in contributions from coal interests during his 2010 campaigns.