High above Pineville, Ky., near the start of the challenging Laurel Cove Trail, an old joke straddles a rock at Pine Mountain State Resort Park.

Local lore suggests that the people of Pineville were worried about the menacing-looking boulder coming loose and rolling off Pine Mountain. In the 1930s, shortly after Pine Mountain opened as Kentucky’s first state park, members of the Kiwanis Club of Pineville devised an unusual safety strategy and fastened a comically large chain to the boulder so residents could see the reassuring chain from town. 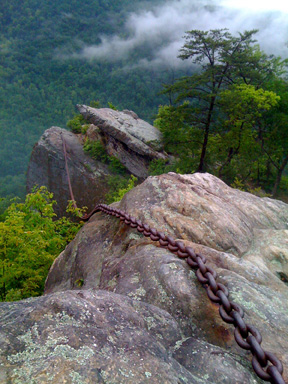 The so-called “Chained Rock” makes an intriguing first stop on the Laurel Cove Trail at Pine Mountain State Resort Park – a site named “resort,” according to park naturalist Dean Henson, simply for boasting both a restaurant and lodge. Despite the name and amenities, this is a wild place, as anyone exploring the rock houses, mossy boulders and trickling streams of Pine Mountain will see.

“This park is primarily a natural and cultural history park,” Henson says. “In many ways, it’s a time capsule. It’s a chance to go back and see the landscape as it was in the time of Daniel Boone.”

A famed frontiersman, Boone marched through these woods in the late 1700s, marking a road through the nearby Cumberland Gap and into Kentucky. From 1769 to 1810, Henson says, more than 300,000 settlers passed through this region as they slipped past what is now the state park.

Today, the 1,700-acre park is home to white-tailed deer, bobcats, skunks, raccoons, red and gray foxes, black bears, a variety of snakes, around 130 year-round bird species, 6,000 plant species and perhaps as many as 40 types of trees, Henson says.

“I refer to it as one of Kentucky’s last, great natural places,” Henson says. “I call it scenic geology — vistas, views and overlooks where you can see the Cumberland Mountains.”

Starting near a natural rock shelter, Laurel Cove Trail slides away from the well-worn path leading to the Chained Rock. The trail marches down a narrow set of rock steps, beside rock walls and, at times, challenges hikers to navigate an obstacle course of fallen trees. “Trail work is never done,” Henson says. “It’s always ongoing.” 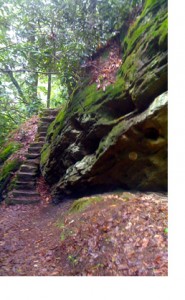 With an elevation drop of 1,100 feet, the Laurel Cove Trail ranks as the most challenging and diverse path in the park, especially for those who skip the shuttle and choose to walk down and back up. “Most people walk that trail in one direction,” Henson says, noting that the uphill walk is steep.

The top of the mountain boasts oak and hickory trees. At the midway point, the trail passes beneath a natural rock bridge called the Powderhorn Arch, which stands about eight feet high and stretches 40 feet across the trail. “If you look at it, it resembles a powderhorn from the flintlock rifle days,” Henson says.

Below that arch, the trail descends through a wider mix of trees, including beech, tulip poplar, hemlock and maple.

“From there on down is what I consider the transition zone,” Henson says. “Going from the top to the base of the mountain is the equivalent of walking from Southern Canada to Northern Georgia, in terms of the zones that you find for plants and animal species.”

Thickets of rhododendron, mountain laurel and azalea bloom near the lower end of the trail at the Laurel Cove Amphitheater, outlined by stones and used in the 1970s for an outdoor drama called “The Book of Job.” Today, that World War II-era amphitheater is a popular site for weddings. It is also used each year, during the last full weekend of May, for the queen’s coronation during the park’s annual Kentucky Mountain Laurel Festival Pageant.

Park-goers who come for special events can also find hikes less challenging than the Laurel Cove Trail among the park’s dozen miles of trails. The Honeymoon Falls Trail might be the
park’s most popular walk in the woods. This 1.5 loop passes a 25-foot-tall — but sometimes nearly dry — waterfall. Other paths include the Rock Hotel Trail, named for a natural rock shelter, and the Living Stairway Trail, which once traversed steps carved into the side of a tree.