Subcommittee Hearing A “Dog and Pony Show” With Your Ringmaster, Rep. Bill Johnson 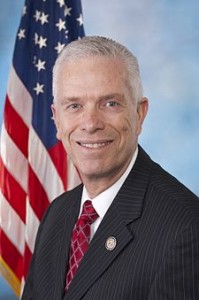 Welcome to the Subcommittee Circus

I’ll admit, this morning’s Subcommittee on Energy and Mineral Resources hearing had my head spinning. Similar to the committee’s previous hearings on the stream buffer zone rule, statements made by the Republican majority committee members could cause concerns as to who exactly they’re representing.

The hearing seemed staged to give committee members yet another opportunity to barrage Director of the Office of Surface Mining Joseph Pizarchik with criticism over the Obama administration’s proposed budget for OSM, which includes proposed changes to the Abandoned Mine Lands amendments of 2006, and the highly contested handling of a rewrite of the stream buffer zone rule, a controversial topic dating back several years. On a second panel, Appalachian Voices’ Director of Programs Dr. Matt Wasson gave testimony in support of the Administration’s rewrite of the stream buffer zone rule, using data on job creation to turn some committee members’ claims of regulations as job-killers on their head.

As the sole member of the first panel, Director Pizarchik made a respectable showing, standing up to attacks from several committee members. When Rep. Dan Benishek (MI) asked if stream protection rule will kill jobs, Pizarchik responded that it takes more people to do things properly than to “shove overburden off a mountain.”

Appalachian Voices’ Matt Wasson was invited by Democratic minority members to give testimony. Shortly after he began, he filled the committee in that, despite the industry’s “sky is falling” claims, the controversy over the stream buffer zone rule is all about mountaintop removal; and that, amidst claims that regulation kills jobs, mining jobs in Appalachia have increased substantially since 2009. In fact, 2011 saw the highest coal mine employment in 15 years. 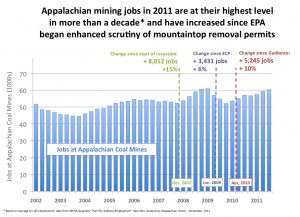 Ohio Representative Bill Johnson wanted to hear nothing of it. Wasson cited numerous peer-reviewed health studies linking mountaintop removal to poor health in regions where it’s practiced. Johnson dismissed him offhand citing a recent industry-funded study that not only did not debunk the studies of WVU researcher Michael Hendryx mentioned by Wasson, but actually pointed to the pervasive nature of the coal industry and it’s negative impacts on the health and well-being of residents of Appalachia.

It could accurately be called a “dog and pony show.” Largely one-sided, facts and figures were misinterpreted to the misfortune of those tuning in. Johnson was the most outspoken and irreverent, interrupting panelists mid-response as they attempted to answer his questions. The Committee on Natural Resources’ “attack dog,” Johnson recently introduced H.R. 3409 – the Coal Miner Employment and Domestic Energy Infrastructure Protection Act, an extremely misguided bill that would tie the Secretary of Interior’s hands when it comes to enforcing the Surface Mining Control and Reclamation Act. Johnson’s bill gives plenty of room for loose interpretation, and is designed to shelter the coal industry from the inconvenience of having the comply with the law.

After the hearing ended, committee Democrats, largely silent or altogether absent during the hearing, made their own strong statement. “Molehills out of Mountains,” a document released by subcommittee Democrats, refutes their Republican colleagues’ allegations about rulemaking and the protection of streams from mountaintop removal mining. The document opens with an insight into the importance of the stream buffer zone rule and why it would be in the coal industry’s interest to leave it unchanged.

“Waste from mountaintop removal mining has buried or despoiled nearly 2,000 miles of Appalachian streams over the last 30 years. The Department of Interior’s Office of Surface Mining is now evaluating options for a new Stream Protection Rule that would address this problem and replace an inadequate rule adopted in the final weeks of the George W. Bush administration. The Obama administration agreed to take this action in settling a legal challenge to the Bush rule, which loosened Reagan-era restrictions on the dumping of mining waste in or near streams.”

You can watch the archived webcast of the hearing here