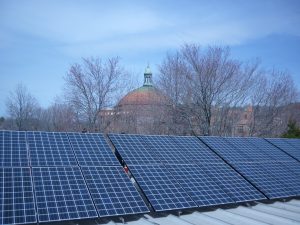 On a sunny day in April at the First Congregational United Church of Christ in Asheville, N.C., the Reverend Joe Hoffman welcomed his congregation with an unusual liturgy. “Today we celebrate a particular act of faith with the dedication of solar panels on our roof,” he announced from the pulpit.

The event, dubbed a “Solarbration,” marked the completion of a collaborative project between The Appalachian Institute for Renewable Energy, North Carolina Interfaith Power & Light and Sundance Power Systems of Asheville, that installed a 10 kilowatt system of 42 solar panels,

Across the country, groups like Interfaith Power & Light are working with communities of faith, recruiting them to a common cause to help reduce their carbon footprint. As the price of solar falls and its popularity grows, more and more congregations are putting faith in solar power.

“We want to communicate to people that it is the business of the faith community to care for the environment,” Hoffman says. “That is what it means to be a person of faith.”
For nearly five years, Hoffman nurtured an interest in installing solar panels on the roof of the church’s education building.

“When we moved into our new space, we had the perfect roof for solar panels,” Hoffman says of the building that is attached to the gothic-style cathedral recently purchased by the United Church of Christ.

Hoffman wasn’t alone in his mission. The Boone, N.C.-based organization The Appalachian Institute for Renewable Energy (AIRE), partnered with N.C. Interfaith Power & Light’s outreach coordinator, Richard Fireman, to develop and promote an innovative solar finance model in which congregations create a limited liability company. “When Richard started coming to see me about five years ago, he was looking for a church to take the lead and to show that we care about the sources of energy we use and how they effect the environment,” Hoffman says.

“Churches are very stable organizations,” Fireman says. “Investing in a solar array on a church is different than any other business that could shut down.”

When the state’s Renewable Energy Portfolio Standard passed in 2007 and allowed individuals who donated to renewable energy projects to receive renewable energy credits or “RECs,” Fireman and Hoffman hit the ground running to create a solar project for the United Church of Christ.

The United Church of Christ was the first congregation to use AIRE’s innovative solar finance model. Working with nine investors, AIRE helped the church organize “First Church Solar, LLC” to raise the capital investment for the project. Fireman says the new company envisions donating the system to the church in about six years, depending on the price of electricity and other elements in the marketplace, at which point many of the investors will have made their money back, and some a little extra. 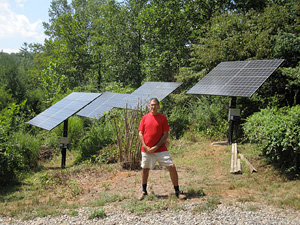 “In this model, since the LLC owns the system, the church doesn’t directly benefit from decreased power bills,” says Fireman. “But the church receives community goodwill, understanding that the congregation is now supplying green energy and they’re seen as a model for caring for creation.”

The United Church of Christ’s solar array is connected to the grid while First Church Solar LLC sell the RECs to Progress Energy and receive tax credits. The investors in the LLC pay a small amount to lease the church’s roof space.

“In six years, once the church owns the system and depending on the price of electricity and other elements in the marketplace, the church may decide to net-meter and use the electricity itself,” Fireman says.

While continuing to develop the AIRE model, Fireman is working on a clearinghouse document to describe the three finance models and exhibit congregations who’ve been successful in completing renewable energy projects.

Churches that have adopted solar like the United Church Christ are also doing their part to spread the good word. “We continue to tell our story and how we accomplished this in an inexpensive way and remind others that our faith tradition supports caring for the earth and using resources wisely,” Hoffman says.

As the “Solarbration” concluded, the modern additions to the stone cathedral gathered the sun’s energy. Squinting into the light, the congregation responded: “Take these solar panels and through them shine the light of Your way into our hearts and minds. Amen.”

In this model, individual donations allow congregations to own the system outright and benefit from the electricity. Donors receive a 35 percent N.C. state tax credit and a tax deduction on their federal return for a charitable donation.
• Myers Park Church in Charlotte
• Temple Emmanuel, Greensboro

In the model used by the First Congregational United Church of Christ Asheville, the investors in the LLC own the system and benefit from the tax credits, depreciation and revenue from selling the electricity and Renewable Energy Credits. After a period of six or seven years, depending on price of electricity and other elements of the marketplace, the LLC donates the system to the congregation.
• United Church of Christ
• Other Projects in the works: First Lutheran Church Albemarle, Elon Community Church

Investors install an array and make an arrangement with the church to sell electricity at a specified rate. Investors benefit from the depreciation, tax incentives and sale of electricity. This model is not used for solar electric in N.C. because only Duke and Progress Energy can sell electricity. However, First Light Solar in Asheville developed a similar Solar Energy Purchase Agreement model, selling BTUS and Therms, since hot water is not regulated by the Utilities Commission.
• Montreat Conference Center