They’re creepy, they’re crawly and they give you the heebie jeebies. As you gear up for Halloween, consider one of Appalachia’s scariest, most squirm-inducing invertebrates: the centipede. These nighttime crawlers may not be the cuddliest creatures, but they are beneficial to our eco-system — especially to those who garden.

Although centipedes come with an “Ewww” factor, they can be helpful in the home because they eat other insects and may be a sign that you have problems with pests — cockroaches, maggots, and other insects — around your house. They will also eat many of the insects that invade your garden and serve as a free, organic pesticide. 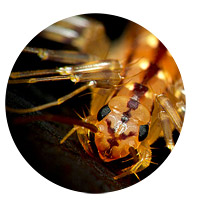 The common house centipede, Scutigera coleoptrata is unique because it always grows an odd number of leg pairs. Photo by Bruce Marlin

As land-dwellers, centipedes prefer moist places in leafy debris and under rocks and logs. The common house centipede (Scutigera coleoptera) grows to about two inches long. Other common centipedes in Appalachia are from the Scolopendridae family and include the Hemiscolopendra marginata and Scolopocryptops sexspinosus. Around 20 families and nearly 3,000 species of centipedes have been identified.

Centipedes are arthropods, meaning they have an exoskeleton, segmented bodies and jointed legs. But unlike some others in their phylum, they breath through holes positioned along their body called spiracles. Their bodies are flat and shaped in anywhere from 15 to 177 segments. They have long antennae and many legs that stick out from the sides of the segment in an ascending pattern; each pair of legs is slightly longer than the one before.

These carnivorous crawlers are equipped with a pair of venomous fangs at the front of their body called maxillipeds. The fangs are actually a modified pair of legs evolved to bite and subdue prey. Their prey includes earthworms, crickets, spiders, termites, ants, slugs and other small animals. Most centipedes hunt at night and hide during the day because they are also susceptible to predators such as spiders, birds, toads, mammals and other centipedes. In addition to their venomous “leg” fangs, centipedes grow an odd number of leg pairs and can regenerate any legs that are cut off.

Female centipedes lay about 60 eggs by dropping them in a hole they dig. They often care for the eggs through the duration of the hatchling stage. Centipedes have what is known as an incomplete metamorphosis. The hatchlings look like young adults and molt, or shed their skin, as they grow and enter new stages of life; immature centipedes, known as nymphs, have fewer legs than full-grown adults. Many species of centipede add new pairs of legs each time they molt. 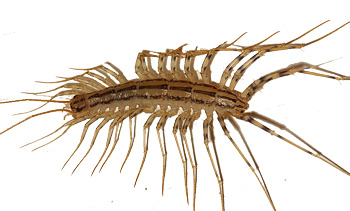 Centipedes eat many of the insects that invade household gardens. Photo by Bruce Marlin

Centipedes rarely bite humans, but when they do, almost all species in Appalachia will produce a bite equivalent to a bee sting. The bites of larger species that live in the southwestern U.S., Mexico and farther south can be very painful, but not lethal to humans. A bite from a large centipede can be dangerous to children or people with bee sting allergies.

Even though you might not want to cuddle with this wriggly, poisonous creepy crawly, they should not cause a fright. We need centipedes to patrol our gardens and keep other pests at bay in the home. So don’t be scared this Halloween. These garden-friendly invertebrates are here to stay.