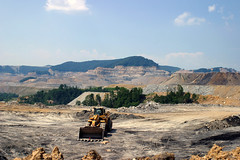 On Sunday, CNN premiered an hour-long documentary by Soledad O’Brien on the battle to save historic Blair Mountain in West Virginia from destruction by mountaintop removal coal mining. Blair Mountain, site of the second largest armed insurrection in American history, is also one of the most important historical sites for organized labor in the country.

While O’Brien and her crew were able to tell both sides of the debate in compelling and emotionally powerful ways, the documentary suffered from the same flaw that just about every environmental story CNN has ever done suffers from: it is presented in a “jobs vs environment” frame that is devoid of any actual analysis of whether that frame is appropriate. Following is a brief fact-check of statements made by by mountaintop removal supporters and opponents in O’Brien’s documentary.

Is “Jobs vs Environment” the Appropriate Frame for the Issue of Mountaintop Removal?

“[The community began to disappear] when federal judges and the EPA came in and started messing with our livelihood.”

On the other hand, another nearby resident, Billy Smutko, said that the community began to disappear when mountaintop removal started. Fortunately, data are readily available to resolve these two conflicting versions of events and it turns out those data support Smutko’s version beyond a shadow of a doubt.

However, data from the Mine Safety and Health Administration (MSHA) show that the number of mining jobs in Logan County stayed roughly the same over that period, even as production of coal from mountaintop removal mines declined by a third. But what really blows a hole through the pro-mountaintop removal arguments is the fact that the population of Logan County decreased by a jaw-dropping 14.4% between 1987 and 1997, during which time the EPA and federal judges did nothing to restrict mountaintop removal and production from such mines more than tripled — from less than 5 million to more than 16 million tons.

As shown in the graph below, and in stark contrast to some claims in the CNN documentary, the number of mining jobs in Logan County has more than doubled since 1999 when Judge Haden imposed the first moratorium on mountaintop removal permits, and mining jobs across West Virginia as a whole have increased by a third. 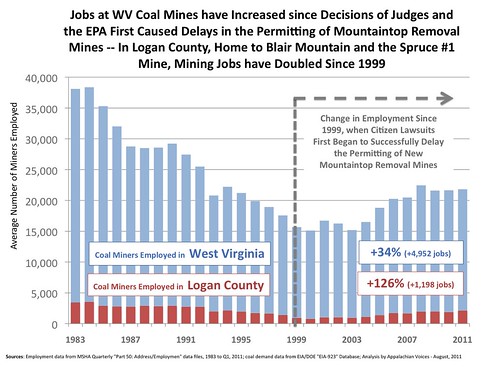 Furthermore, recent MSHA data show an increase in employment in both the county and the state since June of 2009 when EPA began more stringent scrutiny of mountaintop removal permits. This increase in jobs even occurred at a time when demand for Appalachian coal plummeted (see chart below): 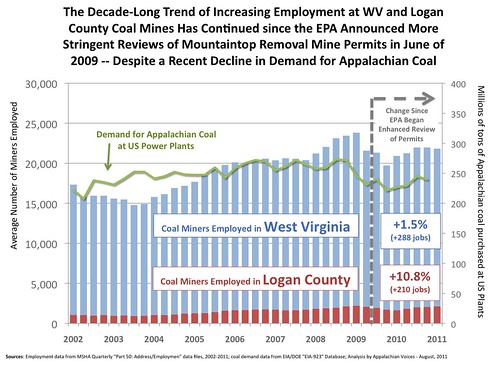 In a world where facts mattered to major news organizations more than generating controversy, even a cursory analysis of employment trends in Logan County and across West Virginia would drive a stake through the intuitively simple but demonstrably false “jobs vs environment” frame for the mountaintop removal debate. And while it’s unlikely that actual data are going to convince CNN (or Congress, for that matter) to abandon the erroneous “jobs vs environment” frame, at least Bill Smutko and Chuck Keeney can feel vindicated that their statements in CNN’s documentary were correct, while the claims from the other side were wildly, if almost certainly unintentionally, off the mark.

Both supporters and opponents of increasing America’s reliance on coal for energy frequently conflate “electricity” with “energy” and make the claim that coal supplies 50% of America’s energy or “power.” In fact, O’Brien herself makes that mistake during the documentary.

The oft-cited “fact” that coal provides 50% of US energy needs is actually wrong on two fronts. First, electricity from all sources, including coal, nuclear natural gas and renewables, actually supplies somewhat less than half of US energy needs (petroleum for transportation and natural gas for heating are the other big-ticket items). Second, the percentage of US electricity that is generated from coal has been declining for decades and is projected to supply a little less than 44% of US electricity this year. Given the consistent and rapidly declining trend in coal’s share of the generation mix, making this distinction amounts to more than just picking fly poop out of pepper (see graph below). Taken together, these facts mean that coal accounts for close to 20% of US energy needs, not 50%. 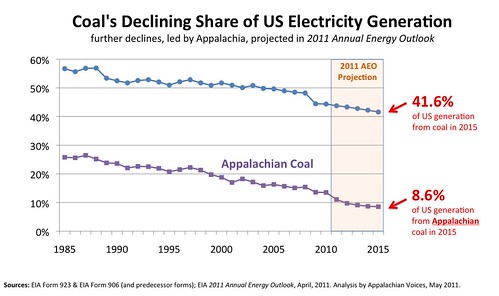 Also evident in this graph is the fact that the decline in coal’s share of electricity has come almost entirely at the expense of Appalachian coal, the production of which peaked in the 1990s and which has since declined by more than 25%. This fact makes it all the more tragic that good people like Linda Dials in the CNN documentary continue to believe that the Appalachian mining industry would simply rebound for the forseeable future if only regulators would go back to rubber-stamping permits for mountaintop removal mines. Whatever happens with mountaintop removal regulation, coal mining is an economic dead end for Appalachia.

Other Incorrect Facts in the CNN documentary

In addition to incorrect statements about employment and poulation trends in Appalachian coal communities, there are numerous smaller errors or misleading statements that should really be addressed.

As usual, Bill Raney, President of the West Virginia Coal Association, wins in the “misleading statement” category. Most striking is his questioning of the studies by Michael Hendryx that show a strong correlation between one’s health and one’s proximity to a mountaintop removal mine.

While Raney is technically correct that these studies are based on “correlation and not causation,” it’s a meaningless distinction for nearly every public health study ever conducted. There is no way to ever prove causation in public health studies, which is why researchers have to use statistics to tease apart trends and find evidence for – but never prove – causation. The peer-review process in science is what protects against misuse and abuse of statistics.

Obtaining direct evidence of health impacts of mountaintop removal would require treating people like lab rats, forcing them to move to different locations or directly poisoning them with coal waste by-products to see what the effect would be. Even then, such a study would not “prove” health impacts from coal waste because the scientific method does not allow for “proving” hypotheses, it only allows for disproving them or assessing the statistical likelihood that they would happen by chance. For instance, a scientist can provide an excellent description of why the sun is likely to come up tomoroow morning, but he or she can never actually “prove” that it will.

But criticizing science as “unproven” has long been the main tactic of spokespeople for polluting industries, and Bill Raney is one of the best. But his tactics are meant only to obfuscate, not to illuminate, and people interested in understanding science and the impacts of mountaintop removal would do a lot better by ignoring anything and everything Bill Raney says.

It should also be mentioned that O’Brien’s statement that EPA has placed a hold on all pending mountaintop removal permits is flat out wrong – EPA has allowed state agencies and the Army Corps of Engineers to approve dozens of permits over the past few years. Yes, EPA has adopted more stringent procedures for reviewing permits, but, to the dismay of many local residents, its actions have fallen well short of imposing a moratorium.

Despite all of my criticisms about the incorrect facts in the documentary, Soledad O’Brien and CNN have done a real service by producing such a powerful documentary on mountaintop removal and the struggle to save Blair Mountain from obliteration. Furthermore, watching the emotionally wrenching moments faced by the Dials and other mining families in the documentary should help those of us who oppose mountaintop removal better understand the deep fear and distress faced by families who believe their livelihood will be destroyed if mountaintop removal is ended. While I believe much of their fear is based on the inflammatory and irresponsible rhetoric of coal companies and politicians, and that ending mountaintop removal will improve the economic situation and quality of life of those working in the mining industry as well as those who feel oppressed by it, nothing positive can come from treating the fears of good people insensitively – or behaving in a manner that inflames those fears even more.

As we fight to save Blair Mountain and to end the environmental, cultural and economic destruction caused by mountaintop removal (click here to help), say a prayer for the Dials and think about how we can approach that effort with compassion and empathy — and in a way that improves the likelihood that the enormous changes the Dials and other mining families face as the Appalachian coal industry declines will, in the end, lead them to a better future than they ever thought possible.

2 Pings/Trackbacks for "Fact-Checking CNN’s New Documentary about Mountaintop Removal: the “Jobs vs Environment” Frame is Dead Wrong Once Again"