Trading the City for the Farm 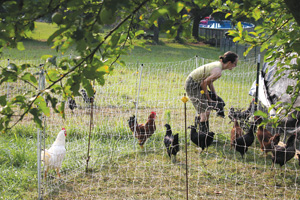 Morel Bliss and August Stringer of Mascot, Tenn., have bid vacations good-bye since their honeymoon last October. Days start at 6 a.m. and are wrapped up at about 9 p.m. seven days a week. Important daily tasks, almost all done by hand, include caring for a huge garden, more than 100 chickens (some egg layers and the others for meat), a Jersey milk cow named Crema, two milking goats—Shassafras and Maple—and their kids, a herding dog named Magness and two cats.

Morel and August—both former Tennessean city dwellers—took up farming because of their love of organic fresh food straight from the source. They developed bio-dynamic farming skills through a series of on-site farm care jobs, an internship at Mountain Farm in North Carolina, and through the Twin Oaks Intentional Community in Virginia.

Morel is a full-time farmer, while August also works weekdays as a graphic designer in Knoxville.