Vineyards in Appalachia Move Toward Sustainability 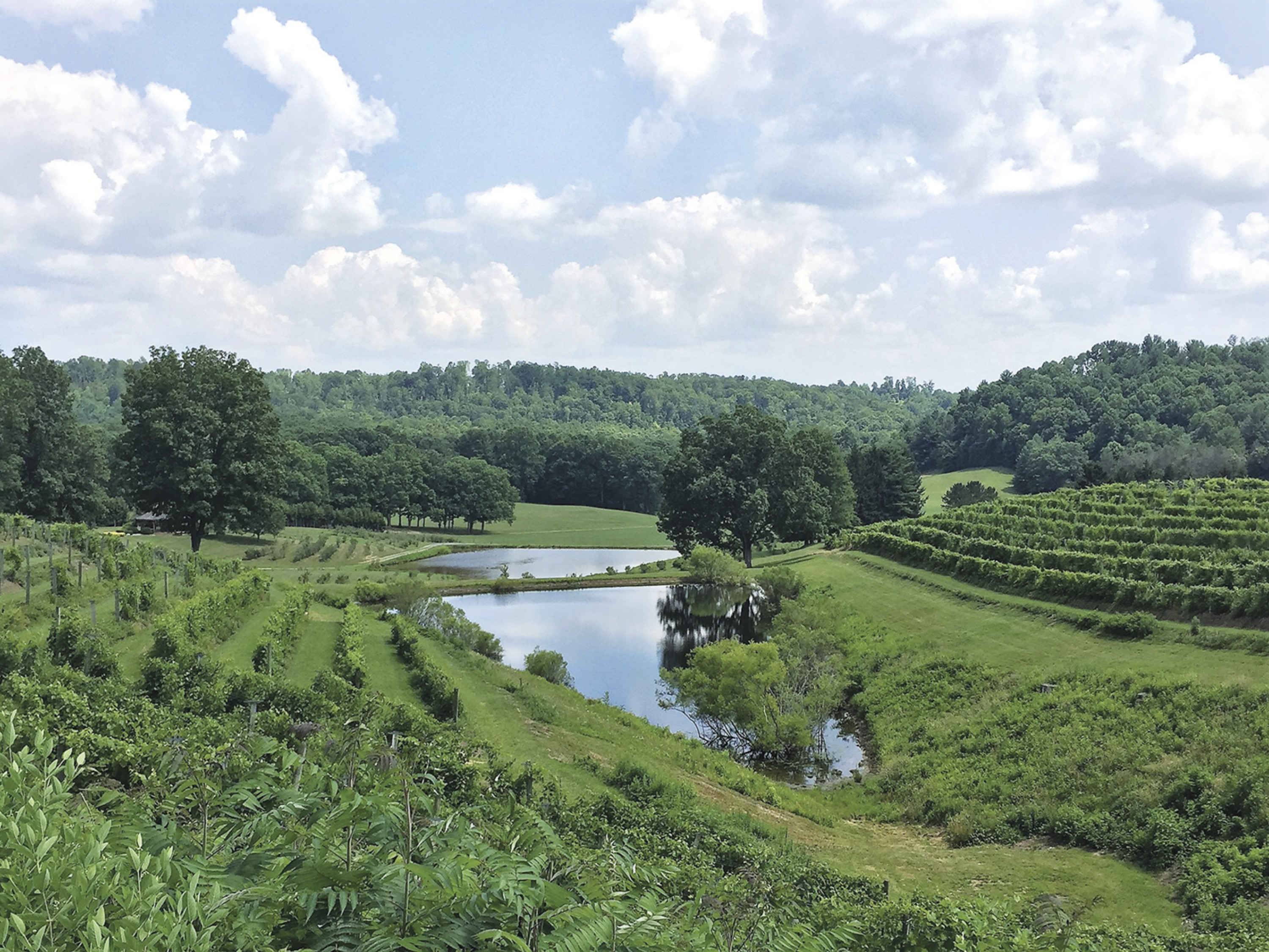 From the vine to the bottle, many vineyards and wineries in Appalachia have implemented sustainable practices or gone completely organic.

The climate throughout the region is challenging for growing grapes, much less doing so sustainably. Fall and spring frosts and relatively high rainfall and humidity are not conducive to wine grape growing, according to David Lockwood, a plant sciences professor at the University of Tennessee, Knoxville.

The European varieties, Vitis vinifera, need “Goldilocks” sites. The elevation cannot be too high because it would get too cold, but they must be high enough for good air drainage. High humidity in the vines leads to fungal diseases like powdery mildew and black rot. Soils need good internal and surface water drainage, because “grapes will not tolerate wet feet,” Lockwood says. Most vintners say Vitis vinifera cannot be grown in Appalachia without synthetic sprays.

Because of concerns over synthetic fungicides and pesticides, many vineyards are opting for more resistant grape varieties. Hybrids of native North American grapes and Vitis vinifera withstand the Appalachian climate while capturing the aroma and flavor of European wines.

Organic-certified Carolina Heritage Vineyard and Winery in Elkin, N.C., grows Cornell University hybrids like Traminette, a white variety, and Arandell, a disease-resistant red. To keep diseases like powdery mildew at bay, Carolina Heritage uses neem oil and an eco-friendly spray called OxiDate to suppress fungus. These treatments don’t work as well as conventional ones but are less harsh on the vines, according to Carolina Heritage co-owner Patricia Colwell. 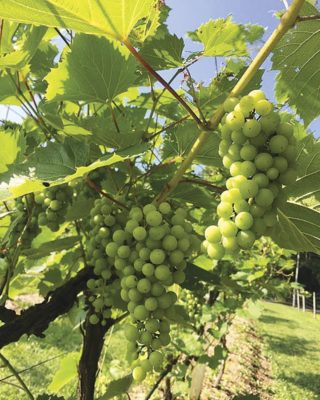 A cluster of the white grape variety Espirit. Photo courtesy of Daniel Vineyards

Because of its 2,600-foot elevation and rough winters, Daniel Vineyards in Crab Orchard, W.Va., grows cold-resistant Frontenac — a University of Minnesota Cabernet hybrid — and Esprit, which can survive temperatures as low as -35 degrees Fahrenheit, according to the vineyard’s event coordinator Chad Fox.

Pests also make sustainable and organic grape growing difficult. To keep Japanese beetles from consuming their young vines, Carolina Heritage used a kaolin clay coating on the leaves, which allows photosynthesis while stopping the beetles from eating the leaves. After two or three years, Colwell wanted to find a cheaper and less time-consuming solution.

“One of the things you learn when you are organic is you learn to think like nature,” Colwell says. “Nature’s got to have another answer or there wouldn’t be a leaf left on the planet.”

Colwell started raising guinea fowl, which she describes as “really noisy and stupid birds,” but they love Japanese beetles. The fowl did not eliminate the beetles completely, but it ultimately worked out as the grapevines matured. When there are too many leaves, the grapes do not get enough sunlight to ripen well. A few Japanese beetles eat some leaves, keeping the grapes exposed to sunlight.

At Daniel Vineyards, rose bushes grow along the edge of the trellis and act as a warning system that helps limit pesticide use to times when it is most vital. Fox explains that when the bugs start attacking the rose bushes, they know they need to spray the grapes.

To reduce the need for pesticides at DuCard Vineyards in Etlan, Va., owner Scott Harliff said they apply strips of pheromones among the vines to disrupt insect mating. The female scent among the vines overwhelms the males and prevents them from finding mates.

At McRitchie Vineyard and Cidery in Thurmond, N.C., Sean McRitchie follows the Oregon standard for integrated pest management, which lists permitted chemicals and the number of times they can be used. For example, the standards only allow growers to spray Roundup, which contains glyphosate, twice per season at a 1 percent solution. McRitchie also uses sulfur and copper sprays for pest control.

The International Agency for Research on Cancer announced in 2015 that glyphosate is probably carcinogenic. The U.S. Environmental Protection Agency said in an April press release that glyphosate is not a risk to public health and is not carcinogenic when used according to the label — but McRitchie wants to be cautious.

“I want to drink my own wine and not be worried, and I want my kids to be able to walk around the vineyard,” McRitchie says.

Beyond pest management, some regional wineries have found other ways to be sustainable. DuCard uses bottles that are 20 percent lighter than average to decrease fuel costs. The solar panels on their buildings offset 50 percent or more of their total electricity usage and power an electric-vehicle charging station that is free for customers. DuCard processes winery wastewater with an artificial wetland system that uses plants to filter out sugars and other matter.

McRitchie purifies water using an ozone machine that injects another particle of oxygen into the water to kill bacteria. They heat up the ozonated water and use the steam to clean their tanks. Using purified steam prevents them from having to use chemicals like bleach or iodine to clean their equipment.

Carolina Heritage maintains a pollinator-friendly wildflower habitat behind one of their fields. Pollinators help the wildflowers thrive and vice versa, which helps promote beneficial insects such as spiders. And Daniel Vineyards has a 100 percent gravity-fed irrigation system that cuts down on electricity use.

Blackburn suspects this is because people do not expect good-quality wine from a region beset by negative national stereotypes. She expresses hope that Appalachia will replace extractive and environmentally destructive industries with farms and vineyards, and that more sustainable and organic vineyards will distinguish the region.

“We’re reinventing ourselves here as a wine destination,” Blackburn says.