The Miracle of Harvest

Meadowview Restaurant and Farm Focuses on Local Foods and Community

After co-authoring 2007’s wildly successful New York Times best-seller, Animal, Vegetable, Miracle with his wife, Barbara Kingsolver, Steven Hopp got an idea: What if he used his portion of the profits to open a farm-to-table restaurant?

However, for many, Hopp’s 2008 decision to found Harvest Table Restaurant in the tiny southwest Virginia town of Meadowview seemed ludicrous. The area’s population totaled 967 and had a per-capita income of around $15,700.

‘Why would anyone open a gourmet seasonal restaurant here?’ scoffed Hopp’s critics. ‘It will have no clientele. The idea is naive. Foolhardy. And doomed.’

But Hopp thought differently. By considering the venture in terms of traditional, profit-motivated business models, detractors all but missed the point. Indeed, Hopp believed the true riddle was how to maximize a business’s positive impact on its community.

Turning a ‘Miracle’ into Reality

For Hopp, a professor of environmental science at Emory and Henry University, the notion seemed a logical outgrowth of Miracle. After all, the book had, at its heart, been about the Hopp-Kingsolver family’s year-long journey to eat and drink as locally sourced and seasonally specific as possible. As co-authors, while Kingsolver dramatized their day-to-day adventures, Hopp placed them in a larger context. Using the family’s individual struggles as a point of departure, Hopp wrote about America’s problematic eating habits. 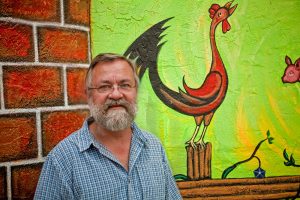 “We’re having a lot of fun, and we’re healing the earth in the process,” says Steven Hopp, founder of Harvest Table Restaurant. Photo courtesy of 621studios.com

Among the socio-environmental issues he took on were the problems of processed foods, genetically modified ingredients, shipping procedures that carry products thousands of miles via fossil fuels, the overuse of artificial fertilizers and pesticides, inhumane factory farming methods, and the disappearance of the family farmer, just to name a few.

“The story about our experiment to eat in-season, locally grown foods became more than just our story,” explains Hopp. “Thousands of folks responded, telling us of their efforts to reclaim a healthier food culture — they found their local farmers’ market, raised chickens and planted gardens. [Miracle] helped inspire individuals, families and communities to be involved in local food movements.”

Considered from such a vantage, opening a restaurant based on principles outlined in Miracle made perfect sense. It was simply the next phase of the project.

“The experiment started when we realized we could do something for [our little] town of Meadowview,” says Hopp. “Clearly we needed jobs. However, we needed jobs that created a deeper sense of community.”

Hopp hypothesized that if you create a business that maximizes local and regional participation, this will in turn bolster the community’s overall well-being.

Present the notion to many accountants and they will laugh in your face, decrying your thinking as, economically speaking, a loser’s bet. And likely they would be right. But in Hopp’s case, with financial backing provided by Miracle, while he wanted the business to be financially viable, he was ultimately chasing a different kind of profit.

“A sustainable and socially responsible business has three cornerstones: Financial, environmental and social,” explains Hopp. “For us, the latter was the most important … We believed if we made the restaurant a model for sustainable principles, it would effect a kind of paradigm shift for the community at large.”

Determined to test the hypothesis, Hopp bought and renovated a big building in the center of Meadowview’s dilapidated, .1-mile strip of a downtown that had once been a booming railway and textile hub. He convinced his long-time friend, protégé and farm-to-table mastermind Phillip Newton to man the kitchen, and promptly set to work.

Within a few short months of opening, Hopp and Newton had discovered nearly 50 local farms from which to purchase sustainably raised ingredients. They devised an impressive menu of Virginia-made wines, ciders and beer. Eventually, beyond free-trade coffee, South Carolina-produced rice, North Carolina seafood, organically grown Florida lemons and some spirits, Harvest Table was sourcing 90 percent of its items within a 100-mile radius.

“We quickly got to know our area producers,” says Hopp. “While we couldn’t buy every last heirloom tomato grown in the county, if someone was producing celery in October, we’d buy every last bit of it. It was a learning experience for [everyone].”

It didn’t take long for relationships to form. Growers began phoning Newton before planting the season’s vegetables. Expert foragers would stop in and peddle what they’d found. Farms were upgrading their infrastructure and purchasing additional heritage breed livestock to meet the restaurant’s demand for organic, sustainably raised meats.

In short, the project was working. However, Hopp and Newton weren’t done.

With sky-high culinary ambitions — “We wanted our food to taste as good as anywhere in the U.S.,” says Hopp. “That was one of our major goals.” — there remained specialty ingredients that weren’t getting produced. For farmers with the know-how to pull it off, the labor demands of raising small batches of specialty vegetables, herbs and spices didn’t make economic sense. 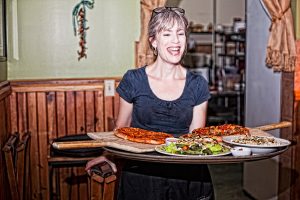 So in early 2010, Hopp purchased a 4.5 acre tract of property adjacent to his and Kingsolver’s homestead and hired Appalachian State University agro-ecology and sustainable development graduate Samantha Eubanks, charging her with the task of transforming the property into a world-class vegetable farm.

“Bringing on Sam allowed me to focus on the kitchen,” says Newton.

Beyond managing the farm and, as Newton and Hopp call it, ‘growing to the gaps,’ Eubanks took on sourcing duties and became Harvest Table’s insider within the local and regional farming community. In this manner, she was able to avoid growing what other farmers were already producing.

“A lot of my job is working with our suppliers to keep us all on the same page,” says Eubanks. “I coordinate with Phillip to make sure that everyone’s growing their share of what’s needed now and anticipating what’ll be needed in the future.”

Overall, the strategy has worked. Within seven years of opening, the number of partnering farms and artisans has blossomed to nearly 100. Taste-wise, by 2011 the buzz was so audible it attracted a New York Times food writer, who subsequently described the restaurant as a place that would be “an instant hit in a progressive, urban enclave like Brooklyn or Berkeley, California.”

Growing Beyond the Table

Devoted to spreading the gospel of sustainability through participatory education, Hopp began expanding his operations. He and Eubanks tapped into the World Wide Opportunities for Organic Farms network and partnered with Appalachian State to offer farming internships. They reached out to area public school systems, coordinating guided field-trips to the farm, and partnered with the Old Glade Antique Tractor Association, the city of Abingdon and White’s Mill to grow and mill heirloom corn varieties.

Harvest Table Farm gathered wood chips for mulch from state road crews, and collected nitrogen-leaching manure from local cattle and poultry operations to add to the wood chips for compost. And they spearheaded an effort to open a collective canning kitchen accessible to area growers.

As a board member of the Abingdon-based regional nonprofit Appalachian Sustainable Development, Hopp also offered keen insight into the organization’s 2012 Rooted in Appalachia initiative to create an online listing through which farmers could sell produce to regional restaurants.

Most recently, he and Eubanks partnered with the local 4-H club. “Basically we taught the kids how to grow broccoli using sustainable methods,” says Hopp. “We provided them with a template and instruction and then committed to helping them sell their crop.” 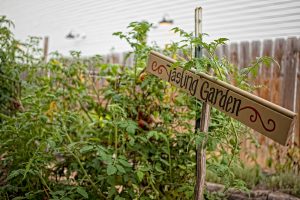 Nothing is fresher than a bite picked from the Tasting Garden, which is located along the patio in back of the restaurant and is available to patrons. Photo courtesy of 621studios.com

The idea was to show kids that money can be made growing more than hay and cattle.

“They got to sell produce to stores and restaurants, [which] got them excited,” says Hopp. “They could see this was a viable career path.”

By combining the storefront with the restaurant, Hopp is able to provide talented local artisans with a sales platform.

With an estimated 40 percent of Harvest Table’s customers streaming in from nearby arts presentations in Abingdon, Trip Advisor recommendations, or articles like this one, the benefits to the community are substantial. And the fact that the restaurant has been named by both Virginia Living and Blue Ridge Outdoors Magazine as the state and region’s “greenest” restaurant has certainly helped.

“When someone visits we want them to have a good time and be amazed by the food,” says Hopp. “We want them to access the community experience. Which, I think, is why we have so much repeat business. That’s what keeps them coming back.”

In the end, while Hopp is quick to point out the project is not making anyone rich fast, he says the farm, restaurant and Guild are putting money in the pockets of over 300 individuals and families. The overall result, he asserts, is a net positive for the community.

“When you shop at a big-box store, 90 cents on the dollar leaves the community,” says Hopp. “Here, 85 cents of every dollar is going back into the town. A substantial share of that money comes from non-local sources … In just eight years we’ve put upwards of $1 million back into the local economy.”

Meanwhile, according to Hopp, everyone involved is learning a little something about sustainable agriculture.

“We’re touching tons of people,” he says. “Hundreds and hundreds of farmers have altered their perceptions. Children and diners are learning about environmentally responsible agriculture. We’re having a lot of fun, and we’re healing the earth in the process.”

And all of this has been made possible simply by believing in local foods. Isn’t it amazing what a meal can do?