With large agriculture squeezing the market on more traditional farming methods, small agriculturalists are finding newer and more creative ways to make a living from the barnyard. 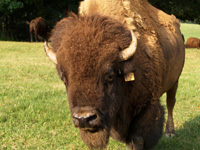 Jerry Nelon currently has about 70 head of free-roaming bison on his farm in Polk Country, N.C. Photo by Robin Nelon

Pink is the new black, tempeh is the new tofu and bison meat is the new cow beef. While modern farming techniques pose many environmental and ethical quandaries, bison are a sustainable—and healthful—alternative to cow beef. And with bison meat boasting more protein and less cholesterol and fat than cow beef, it is no wonder more Americans are putting it on their dinner plates.

Jerry Nelon began working with bison about ten years ago. He had raised cows since the 1970s and was looking for a new adventure. Nelon now pastures his own herd of about 70 bison on Nelon Knolls Farm in Polk County, N.C.

“We are having fun doing this,” said Nelon. “At first it was just something different to try out, but after doing research I found they are a fascinating animal.”

Bison are the heaviest land mammals in North America. They stand about five to seven feet tall and weigh anywhere from 900 to 2,200 pounds. Commonly—but incorrectly—referred to as buffalo, bison are a distant relative of the true buffalo. Hunted to near extinction by early American settlers, bison numbers dropped as low as a few hundred during the nineteenth century. Thanks in part to ranchers and protected land, the numbers now near 200,000.

The species is federally prohibited from receiving artificial growth hormones and relatively few antibiotics are needed to keep a bison healthy. Because they are native to the region and have evolved in their environment, they are able to fight disease and bacteria more effectively than other livestock. In addition to health benefits, bison also provide a friendly alternative to environmental impacts that cattle farming has on the land.

“Bison are a lot easier on the land because they don’t eat as much,” said Nelon. “It took about five times as much feed for my cows than it does to feed my bison. They also don’t tear up the land as bad. I used to be knee deep in mud with my cows, but not with my bison.”

“I would encourage any young person with land to get some (bison) because the market is going to be huge,” said Nelon. “It’s the hot thing right now.”

Nelon envisions a future coalition of bison farmers that will provide meat for local restaurants.

“Bison meat is healthier for the land and the people,” said Nelon. “I hate feed lots. I have never given my bison any treatment and they are just as beautiful and healthy as any herd. I do this because I love the animals.”