Cross-posted from Facing South, the Online Magazine of the Institute for Southern Studies. By Sue Sturgis.

Living in a community where coal is mined by mountaintop removal can be bad for your health. 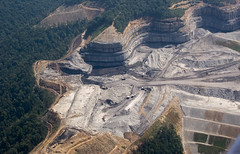 That’s the finding of a new study conducted by researchers at the West Virginia University School of Medicine. Based on a random telephone survey of residents in Kentucky, Tennessee, Virginia and West Virginia, the study used a health-related measure developed by the federal Centers for Disease Control and Prevention. The findings appear in the May 2011 issue of the American Journal of Public Health.

Research has previously found an increase in health disparities in Appalachian coal mining communities. But the new study showed those disparities are especially concentrated where coal is mined via mountaintop removal, where mountain peaks are blasted off using explosives and the waste dumped into valleys below.

“Mountaintop mining county residents experience, on average, 18 more unhealthy days per year than do the other populations,” said co-author Keith Zullig, an associate professor in the Department of Community Medicine. “That’s approximately 1,404 days, or almost four years, of an average American lifetime.”

Given that mining is a male-dominated profession, the study looked at women as well as men in order to ascertain whether the problem was job-related. While the health effects were slightly stronger for men, they were present for woman as well.

The researchers note that one of the limitations of their study is that it lacks direct environmental quality data, so they don’t know exactly how the mining is affecting the air and water. Collecting that data and relating it to human health will be their next step.

They also point out that since the analysis was done by country, it could actually be underestimating the health impact suffered by those communities closest to mountaintop removal operations.

The National Mining Association, a coal mining industry group that advocates for mountaintop removal, has been highly critical of Hendryx’s past work. Last year it commissioned a study of his research, faulting it for not adequately accounting for Appalachia residents’ obesity, diabetes and alcohol consumption.