Appalachia and Our Changing Planet

Appalachia has always been a refuge for biodiversity.

During the last ice age 20,000 years ago, the Appalachian mountains were a Noah’s Ark for thousands of species until the glaciers receded.

In the 19th and 20th centuries, many of our own species trooped off to spend their summers in the mountains, flocking to resorts around Asheville and Boone, N.C., and the Blue Ridge in Virginia, to escape malaria and summer heat along the coasts.

Modern refugees from urban stress still seek solace in the forests and if sea levels rise as quickly as scientists are now predicting, another wave of refugees can be expected in a generation. What will be left of the forests, native species and water resources?

Can Appalachia survive climate change? Will it continue to serve its timeless role as a refuge for biodiversity? Dozens of major studies are underway to answer these questions. The initial results, as one scientist said, are grim. 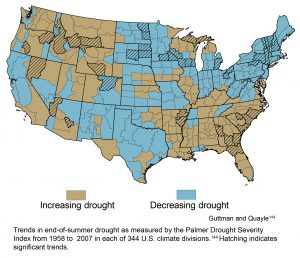 To get an idea of how climate change may affect Appalachia, consider the Appalachian Trail. Fifty years from now, hikers will probably have to cope with higher temperatures, dried-up streams and more forest fires.

“For the present, water isn’t that serious a problem,” said Lenny Bernstein, who studied climate change for the Appalachian Trail Conservancy. “But if those supplies dry up, it’s an entirely different challenge.”

During the 2007- 2008 drought, portions of the Appalachian Trail in North Carolina had to be closed. “Was that an unusual event or a harbinger of the future?” Bernstein asked.

According to the U.S. Global Change Research Program, climate history shows the southeast has become hotter and drier since the 1970s. In the past 30 years, for most of the Appalachian region, five to 15 fewer days of freezing have been recorded per winter.

“It is disconcerting,” Bernstein said. “If those projections are real, and that’s where the future is, then 2008 is not going to be unusual.”

Projections of severe climate change show much drier conditions over the southern end of the Appalachian Trail, with 8 inches less rainfall every year. Eventually, it might not be safe or even possible to hike the entire trail from Georgia to Maine.

“The effects of climate change will continue to result in greater probability of longer and bigger fire seasons, in more regions in the nation,” the QFR report stated. “Drought effects in the southeast, southwest and west will make these areas especially vulnerable in terms of fire risk.” 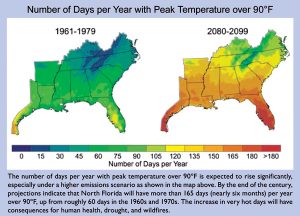 As summers grow hotter and drier, it’s likely that Appalachia’s stressed forests will harbor fewer birds and animals, and that a migration of many species to cooler climates will take place. However, its not easy to separate climate impacts from the already serious impacts of habitat encroachment and mountaintop removal coal mining.

From flying squirrels to bog turtles, Appalachia provides a home to an extraordinary diversity of species. It is considered to be one of the world’s great centers of biodiversity. Only two years ago, biologists found an entirely new genus of salamander – the first new vertebrate genus to be discovered in the United States in half a century. Salamanders, however, are on the decline. In a 2010 journal article, JR Milanovich and colleagues found that climate change threatens “significant projected loss of habitat for many salamander species that currently occupy the Appalachian Highlands.”

Native trout are also endangered, according to a “grim prognosis” by Patricia Flebbe, research biologist for the U.S. Forest Service. Between 53 and 97 percent of wild trout populations in the southern Appalachians could die out as streams become warmer, Flebbe and other Forest Service researchers said. Trout are coldwater species that depend on relatively low stream temperatures to survive. “Trout are already at the southern limit of their range,” Flebbe said. “Suitable habitat area will shrink and become much more fragmented as the climate becomes increasingly warm.”

Forest service researchers say that climate change will likely pose a severe threat to Fraser fir, Balsam fir and Carolina hemlock of the central and southern Appalachians. These species occur in higher elevations and are also currently under siege from exotic pests like the woolly adelgid. Other tree species — the Table Mountain pine, Red spruce and Striped maple — may survive in the north, but face extinction in central and southern Appalachia as a result of changing climate conditions.

Many studies on the impacts of climate change focus on single species, but broader studies of ecosystems also reflect high risks. The types of animals that will be hardest hit are those that are narrowly distributed in habitat, according to Mark Schwartz and colleagues writing in the journal Climate. Focusing on trees and birds of the eastern United States, the scientists found that extinction vulnerability increases for species that are not as widely distributed.

It is this vulnerability which gives some grave pause about the future of Appalachia in the face of our changing climate.