Kari Gunter-Seymour | The Art of Empowerment 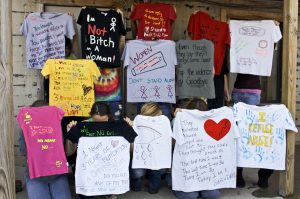 Sisters in Recovery posing behind their t-shirts.

Three years ago, Kari Gunter-Seymour was sitting at her monthly potluck supper surrounded by her closest female friends, when she had a vision.

“People think of an Appalachian woman and look down on her,” said Gunter-Seymour. “I started thinking about women and art out there needing some support. I wondered what their stories were and that prodded me to put together an exhibit.”

Thus began the annual women of Appalachia Art Exhibit and its sister project, Women Speak— a night dedicated entirely to spoken art. What began as a five women exhibit and four person poetry reading evolved into a 27 artist show last year and is already promising greater participation for 2011.

Gunter-Seymour strives to include less-traditional artists and women with fewer resources to create art.

“Some of the women in our area have not had the same opportunities as others,” said Gunter-Seymour. “I was a single woman going to school and a lot of people were helping me. We have women that don’t have that support or encouragement.”

This led to the involvement of the Sisters Recovery Quilt project, in conjunction with the local health recovery program.

“We have women who need to be safe from domestic violence and rape and things that we don’t like to talk about but are happening all around us,” said Seymour. “Last year they made two beautiful quilts that were just wrenching in their message.”

This year the art exhibit will feature work from the Clothesline Project, a nationwide project that supports women speaking out against domestic violence and rape.

“It is hard to learn about what these women have been through knowing that they are 2nd and 3rd generation victims of these experiences and now they have the opportunity to leave that life,” said Gunter-Seymour. 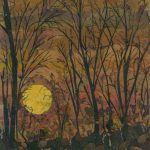 “Not all women that suffer this are from under-served areas,” she said. “We have very wealthy women also suffering that need courage to speak out. That’s what we hope this project will initiate.”

Unique to the exhibit is the diversity of mediums used— among them metal, enamol, acrylic, water color, pencil and ink drawings, clay, photography and fiber pieces.

Winsome Chunnu— assistant director of the Multicultural Center at Ohio University and curator of the art gallery— worked closely with Gunter-Seymour to develop the idea for the exhibit and helping the women secure a spot at the Ohio State art gallery.

This year’s Women Speak event will be held on May 12 from 6-8 p.m. in the university’s main theater.

“I think there is a lot less opportunity for spoken art than visual,” said Gunter-Seymour. “We are in a time where people aren’t speaking anymore— they are emailing and tweeting. People are using their fingers and not their voices. It is more important than ever to remind people of spoken word.”

The Women of Appalachia exhibit and Women Speak has empowered a whole new group of artists. The show will exhibit April 1 through June 10, 2011. The opening reception will be held April 8 from 6-9 p.m. 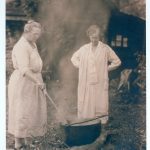 When Lucy Morgan stepped off a train in Penland, N.C. in 1920, ready to work as a teacher at the Appalachian School, no one knew that she would one day lay the foundation for one of the most well-known craft schools on the east Coast.

Inspired by weaving classes at Berea College in Kentucky, Morgan decided to teach western North Carolina mountain women to weave as a means of income. As the popularity of the weaving collective spread, Morgan was able to secure government funding and provide some program instruction.

Morgan’s success attracted the attention of Craft Revival leaders like weaving expert Edward Worst, who suggested adding a pottery production to the weaving program and, in 1928, the cottage industry duo was named Penland Weavers and Potters.

Penland Weavers morphed into Penland School of Handicrafts in 1929, offering training for artisans in a quickly expanding variety of traditional and contemporary craft disciplines, with a goal, says the school’s webpage, “to support creative traditions and build community through instruction in craft.” 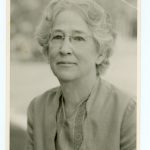 Even during the Great Depression, Morgan was adding programs at Penland like chair-seating, vegetable dyeing and spinning. She was named the Southern Mountain Handicraft Guild representative to the International Exhibition of Folk Arts in Berne, Switzerland in 1934; by the 1940s visitors from Canada, Alaska, Peru and China were visiting Penland to learn about crafts and cottage industries.

Today, the Penland School of Crafts is a nationally recognized center for craft education offering short-term workshops, a resident artist program and an exhibiting gallery space.

According to her own memoirs, Lucy Morgan never left the Western Carolina mountains for any length of time during her life (and she lived to be older than 90!). Morgan’s story is well-documented in Western Carolina University’s project, “Craft Revival: Shaping Western North Carolina Past and Present.” Morgan remained at Penland until 1962. 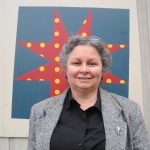 Two years ago Sharman Chapman-Crane held a meeting to start a Heritage Quilt project. She had seen quilts decorating the countryside in other states and decided to bring that to her Letcher County community.

“My idea was to put them near community and senior citizens centers, but it has gone way beyond that,” said Chapman-Crane. “Schools, parks, businesses and individuals are putting them up. It’s been pretty amazing to see.”

Her community has created over 80 squares ranging from 2 by 2 feet to 8 by 8 feet.

The county festival committee is talking about making a brochure and map of the quilt locations for visitors to follow around.

The quilt project- now in 20 states- was started by a woman in Ohio and was originally intended for the sides of barns.

“Other counties have applied for grants and had professional artists doing it,” said Chapman-Crane. “Ours is entirely volunteer basis. Also unique is that here we have a strong quilt heritage, but not enough barns so we have them hanging in many places.”

“People just love it and it has been a real unifying thing,” said Chapman-Crane.