For this issue, we asked Jennifer Pharr Davis— long-distance hiking queen from Asheville, N.C.— to profile her favorite hike in Appalachia. Davis has hiked more than 9,000 miles, including the Appalachian Trail (twice!), the Pacific Crest Trail, the Inca Trail to Machu Picchu and the 600-mile Bibbulmun Track in Australia. In 2008, she became the fastest woman to hike the Appalachian Trail, averaging 38-miles a day and completing the trail in 57 days. Davis lives in Asheville and is co-owner of Blue Ridge Hiking Co. 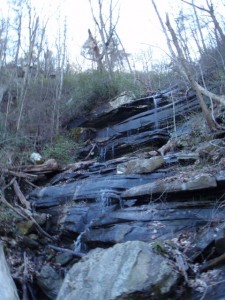 Photo of the trail by Jennifer Pharr Davis.

If you live in southern Appalachia and you hear the term “long-distance hiking trail,” you immediately think of the Appalachian Trail. However, there are several lesser-known multi-day treks in the southeast that are often more convenient, less crowded and most importantly – they don’t take six months to complete.

One of my favorite local treks is the 80-mile long Foothills Trail. Although it touches the North Carolina and Georgia borders, the path remains predominantly in upstate South Carolina. The geography along the route is stunning; Walking through the escarpment, the rolling foothills of South Carolina turn into the majestic Appalachian mountains.

Beyond the gorgeous rock face at Table Rock State Park and scenes from Sassafras Mountain, South Carolina’s tallest peak, my favorite feature on the Foothills Trail is the water. Rivers, waterfalls and lakes line the trail and it is rare to walk more than an hour or two without passing some place to soak your feet or take a quick swim.

The trail’s most breathtaking view is found at the base of Upper Whitewater Falls, the tallest waterfall east of the Rocky Mountains. Observing the power and grace of the river as it plunges over 400 feet is impressive. However, for some hikers, the still banks of Lake Jocassee or the light blue currents of the Chatooga River are just as awe-inspiring.

No matter what section of the trail you like the best, every step is beautiful and worthwhile. And the best part is, the entire path can be hiked in less than a week. Spring break anyone?

An adventure in the woods becomes a journey through the mind for Jennifer Pharr Davis, as readers discover in her book, Becoming Odyssa: Epic Adventures on the Appalachian Trail. The summer after she graduated from college, Davis set out on the 2,175 mile trail giving herself time to think about where her life would go next.

“I started to realize how what was important in my life had changed,” writes Davis. “Out here I wasn’t worried about the government or the economy, fashion or pop culture… For the first time in my life, I was experiencing real pain. And even though it hurt, it made me feel more alive than I did in the controlled comfort of society.”

Meeting obstacles along the trail, Davis is challenged both physically and mentally, but she addresses each new hurdle with humor and grace, allowing a sense of openness to guide her through the unexpected.

“It struck me that every person I had ever met and would ever meet knew something I didn’t and could do something I couldn’t,” she writes. “It was a simple truth, but I finally realized that the more people I invested in, the smarter and better equipped I would be.”

Davis provides unique insight into the challenges of the trail for a young female. She certainly provides a beautiful odyssey through her emotional and physical transformation. For anyone looking for a funny, yet thoughtful, adventure on the trail, Davis is your girl.

Put the “Tough” in Through-Hiking 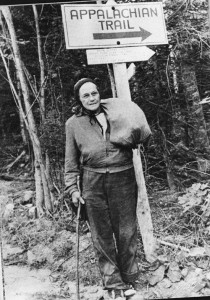 Emma “Grandma” Gatewood’s list of accomplishments on the Appalachian Trail would be impressive by our generation, let alone a half-century ago. In 1955, Grandma Gatewood became the AT’s first solo female thru-hiker after reading an article about the 2,168-mile trail in National Geographic magazine. She was 67 years old. Gatewood became the first person to hike the trail three times, the second time in 1960 and the third in 1963, when she was 75 (the latter effort was completed in sections). She held the title of oldest female through-hiker until 2007.

The tiny 5’2″ farmer’s wife from Gallia County, Ohio, was also an unwitting pioneer of extreme ultra-light hiking, wearing Keds sneakers and carrying an army blanket, a raincoat, a plastic shower curtain for shelter, a cup, a first aid kit and one change of clothes slung in a homemade bag over her shoulder. She gathered wild foods along the trail, supplementing them with dried beef, cheese, nuts and Vienna sausages bought in towns along the way.

Gatewood was profiled in Sports Illustrated and numerous local newspapers, and even appeared on The Today Show. In 1959, the sassy grandma walked 2,000 miles of the Oregon Trail to Portland, Or., averaging 22 miles a day.

For the last 13 years of her life, she lead an annual winter hike on her favorite six-mile stretch of Buckeye Trail in Logan, Ohio, missing the event only once. When Grandma Gatewood died in 1973 at the age of 85, she had eleven children, 24 grandchildren, 30 great-grandchildren and one great-great-grandchild living.

Gatewood is attributed with once have said, “Most people today are pantywaist (sic).”