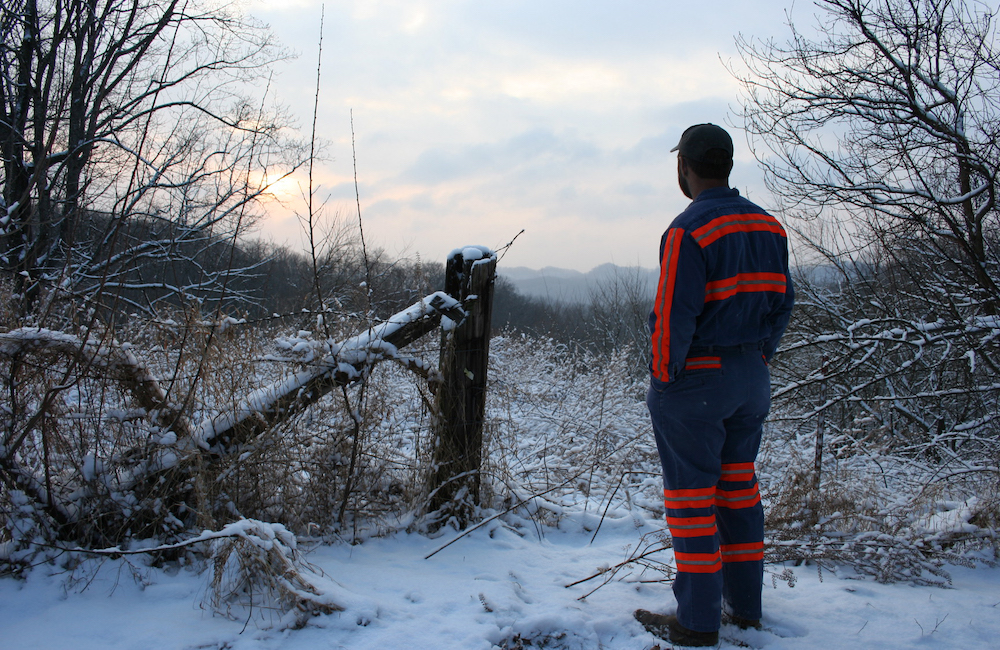 By Daniel Alexander Hawkins, Special to The Voice

It is 10:06 p.m. on a Sunday night and I begin getting dressed in my high-visibility work uniforms, the trademark navy shirt and pants with orange stripes identifying the Appalachian coal miners in our area.

The children have already gone to bed with hugs and kisses from their daddy, and now it’s time to bid a loving farewell to my wife. My body is still attempting to sort out day and night after an attempt to enjoy a short-lived weekend from the third shift.

I arrive at the mines and enter the bathhouse to put on my boots, belt, hard hat, and light. There are many workers already milling around drinking coffee and discussing the evening’s football games or the highlights from the Nascar series. More often these days there is talk of current politics surrounding coal mining; miners derogatively referring to environmentalists as “treehuggers who need to go without electricity for a while.”

Greetings to one another almost always include the informal exchange of, “How ya doin?” met with either a half-hearted insult or a sarcastic remark about feeling great. Everyone is trying to smoke their last cigarette while trying not to think of what lies ahead in the next shift.

Coal mining is rigorous work even with the mechanization of coal production. My great-grandfather was a coal miner during the “pick and shovel days.” He experienced the early times of the arduous labor, when he had to purchase his own tools and dynamite to extract coal he was paid for by the ton, not by the hour.

While there is no comparison to the labor intensity of mining practices conducted over a half century ago, it still requires a great deal of physical effort to work in today’s mines. Long shifts combined with mandatory overtime contribute to ongoing fatigue and sickness.
The life of a coal miner is not for everyone.

Many times I have wondered why people endure these conditions–for most it is purely financial. Coal mining jobs in our region are the most widely available and highest paying. Sadly, you do not need to have experience, a clear criminal background, or even a high school diploma, just common sense, a strong work ethic, and a clean drug test.

“Work hard, play hard” is the motto as miners spend extravagantly to enjoy what little time they have off. Most of the men are deeply in debt after buying new homes, vehicles, boats, RVs, and ATVs. Some even plan what payments they can afford based on how much overtime they plan on working. It is a vicious cycle that keeps coal miners scared for their job for fear of losing everything they have, working to the advantage of the coal company’s production.

Eleven o’clock rolls around and it is time to climb onto the diesel-powered mantrip, starting the journey into the darkness. The mine roof is gray and featureless but in a surreal way I know that hundreds of feet above me there are trees, streams, hills and hollows, some few remaining bits of Appalachian beauty.

The mantrip passes by a reminder of the Sago disaster, an underground shelter designed to provide ninety-six hours of breathable air and supplies. I know that, in truth, we are more likely to be killed instantaneously in a disaster than to live and make an attempt at survival within these safe havens. I put this and other thoughts of death and injury into the back of my mind, drumming up a conversation with the man sitting beside me.

I am a pinner man, a roof bolter operator. I am the one who, with a partner, goes into unknown territory after every cut of coal is pulled out by the continuous miner. It is my job to put in the roof supports that keeps the top from falling in on us. I strip down to my t-shirt because I know I will soon be hot and sweating from the physical labors of the job, slinging around six-foot long roof bolts, handling hot drill steel, and dragging around the electrical cable as we move the machine.

After what seems like an eternity, it is time to leave. It is a cold trip out. The lows are only in the teens and we have to exit by forcing our way through the intake air that enters the mine.

The dim morning sunlight greets me as we exit the portal and find there is now snow on the ground. I put up my things and choose not to shower in the bathhouse so I can make it home more quickly. I make my way home where my family is still sound asleep and I quietly enter the house feeling tired and defeated.

I take a warm shower, washing off the grime, blowing my nose several times to help clear out all of the blackened mucus from the coal dust I breathed in. As I lay down to sleep, I pray that today my children are a little quieter so I can rest.

Like many others of my generation I tried to heed the warnings of my family elders who worked in the mines. Up until the past two years, my life had been spent doing everything I could to stay out of the coal industry.

I studied hard in school, but due to a lack of funding and quality education, I failed to go to college. Instead, I chose to move away and try my talents in different places. All attempts met with failure, returning me to the mountains I love.

The best alternative to a coal mining job I could find was in a call center. I managed to work my way up as far as I could go, but as is common with many such technology jobs in the area, wages are just enough to live off of and have little hopes of retirement.

As time went on, it became evident that the income of such a job was insufficient to achieve any long-term financial goals for my family. I pushed my many negative mental paradigms of the coal industry aside as I became enchanted by their high wage offerings.

I took a job as an underground coal miner at the age of twenty-eight, and now, two years later, I am deeply regretting my decision with a new-found resentment for the coal industry.

Growing up I had always known that the coal industry is not a friend of our community. Strip mining that occurred near our homes took away many of the beautiful forests and abundant wildlife that my brother and I enjoyed as children. I witnessed, firsthand, the greed and disrespect that the coal companies showed toward their employees during the 1989 United Mine Worker’s Association strike against Pittston Coal Company.

All of these things I knew, but it hasn’t been until now that I have realized, clear as crystal, just how ruthless and manipulative the coal industry is. Like the naive child that was told not to play with fire, I have been burned. Perhaps some day I may find a way leave the mines without putting my family at financial risk.