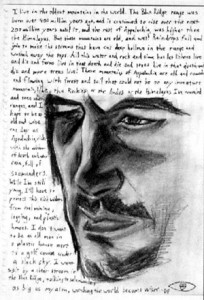 The Portrait Story project came to the southern highlands in March 2008 to continue a legacy of capturing images and stories to identify with the region through the eyes of its people.

The artist, Francesco Di Santis, had recently completed a portrait project of Hurricane Katrina victims. Days after the hurricane devastated the Louisiana and Mississippi Gulf Coast, di Santis came to the area and stayed for 15 months drawing portraits of victims, only asking for their stories.

Many in the environmental movement for Appalachia felt the project could show the public the impacts “King Coal” has had on the lives of people who feel a connection to the region.

The project began as a five-month quest into the coalfields where sympathizers had organized to fight the consequences of mountaintop removal coal mining.

As the project developed into a much larger undertaking, Di Santis quickly realized that if the voices from throughout Appalachia were to be heard, he would have to cover thousands of square miles. After two years, he had taken portraits of thousands of people throughout seven states.

The artists’ spirits were bolstered by an incredible desire to participate. Dozens of families invited the artists into their households and spread the word to family and friends.

Di Santis, drew simple but strong portraits with the request that people would write their own personal narrative.

“The media infrastructure of The Portrait-Story Project is the participants’ handwriting on the same physical page as an original portrait of themselves,” said Di Santis.

Subjects wrote about folk culture, family, stories of the old United Mine Workers, and how surface mining has impacted their lives and the land. Many of the stories related the longing for peace to return again in the mountains.

One man he portrayed wrote, “I don’t want to be an old man in a plastic house next to a golf course under a black sky. I want to sit by a clear stream in the Blue Ridge, talking to salamanders as big as my arm, watching the world become wiser.”

After much anticipation, the public will be able to view Voices for Appalachia, A Portrait-Story Project, Written and Narrated by Hundreds. The art series will be displayed March 2 to 27 at the Unitarian Universalist Church in Chattanooga, Tenn., and then April 2 to 27 at Rosetta’s Kitchen in Asheville, N.C.

To request the art series in your community visit UnitedMountainDefense.org.

To view the entire art series, click to VoicesForAppalachia.org.