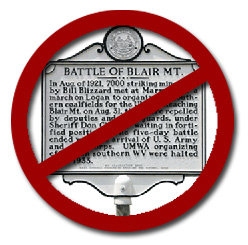 The characters are different but the plot is all too familiar:

In the movie Avatar, Parker Selfridge of the RDA mining corporation, has the bulldozers take down the Na’vi history tree. It’s standing between them and a valuable black energy rock called “unobtainium.”

In Appalachia, Randall Reid Smith, WV Commissioner of Culture and History, asks the National Park Service to remove National Historic Register designation from Blair Mountain, site of a major 1921 confrontation between the coal miners unions and the coal industry. On Jan. 8, 2010, Carol Schull, Chief of the National Register for the Park Service, announces an unprecedented de-listing of a national historical site, effective immediately.

Appalachia’s history is standing in the way of another valuable black rock.

“If they can Stalinize our history like this, it shows that big coal still owns our state government,” said Wess Harris, editor of “When Miners March,” a book documenting the union’s side of the battle of Blair Mountain. “This action does not stand alone but is part of a deliberate effort to erase Appalachian history.”

The site of the 1921 armed conflict between over ten thousand coal miners and company guards involved at least 80 deaths. The site has enormous significance for historians and for the American labor movement.

Letters of support for the original historic places listing—approved just last March of 2009—came from the Presidents of the United Mine Workers of America, the Society for Historical Archeology, the Society of American Archeology, and many other historians and scholars.

“The Blair Mountain Battlefield is a unique historic and cultural treasure that deserves all the recognition and protection we can muster,” said archeology professor Harvard Ayers of Appalachian State University. “The coal industry…conducted a scare campaign to con property owners within the nomination boundary into signing formal objections to the listing. “

The decision to de-list Blair Mountain (first reported in a blog post by Jeff Biggers) is questionable on a number of levels, not the least of which is that two of the property owners who supposedly object to the Historical listing are deceased.

In the movie Avatar, the Na’vi of Pandora have intricate language, customs and connections to the natural world that supports them. They are under assault from corporate greed, and one of the first places attacked is their historical memory contained in the Tree of Voices.

Appalachian people have similarly intricate connections to the natural world of Appalachia—connections that they are losing as explosives and giant bulldozers destroy the mountains for coal.

Their history is also under assault.

Its one thing to watch a movie, but it’s another to understand the point that a movie like Avatar is trying to make.

Outside the popcorn palaces, the harsh reality of the struggle over valuable black rock is evident not in distant lands or remote worlds, but very close to home.