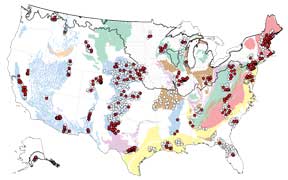 A 2009 study by the USGS found that more than 20 percent of domestic drinking water wells had one or more contaminants above a human-health benchmark. Sampling sites with contamination issues are marked in red, sample sites that were unaffected in white. Image courtesy of USGS.

You would think for small, rural communities in central Appalachia, water from a private well—available at the fairly low cost of maintaining a well and without the hassle of a monthly bill—would be a blessing.

And if it weren’t for mining operations, slurry injections, radon-rich aquifers, and an often poorly managed private sewage system, you might be right.

Whereas public water sources are tested for contaminants regularly (several times a day in some cases) and are regulated by EPA-set standards, water from private wells have no such insurance.

Private wells, the source of drinking water for 15 percent of U.S. residents, are not regulated; their monitoring and safety is the sole responsibility of the owner.

Though well-maintained, regularly tested wells are generally safe to drink from, recent studies indicate that contaminant levels in domestic wells may be an area of concern for public health.

In a March 2009 study, the United States Geological Survey (USGS) found that more than 20 percent of sampled domestic wells contained one or more contaminants at a concentration greater than an EPA Maximum Contaminant Limit (MCL) or other human-health benchmark.

“The results of this study are important because they show that a large number of people may be unknowingly affected,” said Matt Larsen, USGS Associate Director for Water. “Greater attention to the quality of drinking water from private wells and continued public education are important steps toward the goal of protecting public health.”

The study also showed trends in contamination based on geologic characteristics of aquifers. Radon, for example, a radioactive gas that can dissolve in water was found at relatively high concentrations in crystalline-rock aquifers in the Northeast, in the central and southern Appalachians, and in central Colorado. According to the study, about 30 percent of wells in these regions had radon levels above the EPA-recommended human-health benchmark, compared to 4.4 percent nationally. Radon exposure has been linked to the development of lung cancer.

In a 2005 study published by “Water, Air, and Soil Pollution” nearly half of the 179 tested wells from across the Appalachian region (eastern Kentucky, western West Virginia, southern Ohio, and northern Tennessee) had detectable levels of arsenic. Six percent of these had levels exceeding the EPA MCL of 10 parts per billion.

Poor sewage management, including large numbers of “straight pipes” which send untreated sewage directly into surface water supplies, is also an area of concern for private well owners in Central Appalachia. According to the USDA Natural Resources Conservation Service, over 50 percent of the private drinking water wells in the Appalachian area of Kentucky are contaminated with disease-carrying pathogens as a result.

The EPA recommends that well owners get their water tested annually, after floods, or if otherwise suspicious of contamination. Annual tests are important for both ensuring the safety of private drinking water supplies and establishing documentation of contamination issues.

Though home test kits are available, well owners should contact their local health departments for information on well testing. Often, county health departments will help perform basic tests for bacteria and nitrates. If not, or if more tests are required, they should be able to provide contact information for state-certified labs. These labs provide testing kits and conduct sample analysis.

You can find one in your area by calling the Safe Drinking Water Hotline at 800-426-4791 or visiting www.epa.gov/safewater/labs.