First Colonists Were No Strangers To Drought 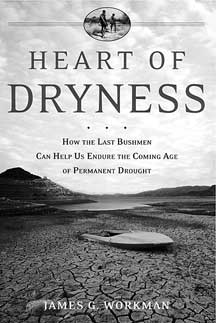 Paleoclimatology remains a young and inexact science, and no one could pinpoint the precise stages at which high temperatures and dryness caused local human extinctions. But the correlation was sobering….

Some 5,000 ago, flourishing Native American cultures suffered prolonged exposure to climate only slightly hotter than it is today and nearly went extinct; for more than a millennium the Southwest was little more than one big ghost town.

A hot era that lasted from 800 to 1300 boosted medieval European agriculture but scorched much of pre-Columbian America.

… Despite superior technology, immunity, and weaponry, America’s first colonies were far less adept (than Native Americans) at coping with protracted thirst. Queen Elizabeth’s first settlers at Roanoke were last seen on August 22, 1587, hungry and running out of water, during a dry spell so severe that it even affected the native subsistence food of indigenous Croatoan tribes upon whom the colonists depended. Three years later they had vanished. Following centuries of mystery, a recent tree ring reconstruction from A.D. 1185 to 1984 showed that the Lost Colony precariously arrived at the onset of the region’s driest three-year episode of the last eight centuries.

Two decades later, 4,800 out of 6,000 Jamestown colonists died in waves upon their arrival. Early historians blamed the deaths on dumb planning incompetence and weak support, but scientists have now directly and precisely linked the sudden crash— in native subsistence, peak mortality, domestic livestock deaths, and a rapid decline in drinking water— to the driest seven- year period in 770 years. Unlike the colonists at Roanoke, these settlers left written records of what occurred. As water dried up, Jamestown’s former “London Gentlemen” degenerated into thirst- wracked, scurvy- ridden starving wretches turning on each other, killing and even eating members of their own family.

Following those first unfortunate colonies, the geographically blessed United States enjoyed an exceptionally cool, wet era during which it progressed from agricultural and mercantile economies through a postindustrial Information Age of 300 million highly urbanized people. Even so, during the wettest century of the past millennium a few dry “speed bumps” have profoundly destabilized Americans, suggesting the level of risks water scarcity held. A relatively mild six-year drought in the 1930s wreaked agricultural and social mayhem throughout the Dust Bowl.

A less acute but more widespread drought pressed down across the Midwest during the 1950s, extinguishing many rural economies. Over subsequent decades the already arid Southwest and West grew increasingly dry. Starting this century, laypersons across America have been observing everyday weather that seems hotter and drier than normal.

Scientists confirm that in fact it is, and will likely worsen in the decades ahead. As we humans burned and cleared vast forests, converted land to irrigation agriculture, and powered industrial growth with fossil fuels, we were unwittingly baking the earth in what appeared to be an irreversible process. Our carbon emissions had thickened the relatively thin layers of the outer atmosphere, trapping solar radiation. The effect resembled leaving our collective car in an exposed parking lot with windows sealed and kids locked inside.”