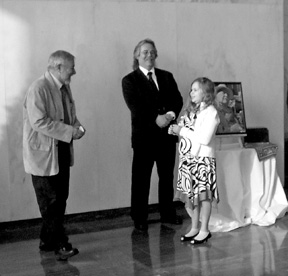 Mourners wearing red neckerchiefs laid William Blizzard to rest amid refrains of the old Union hymn, “Solidarity Forever” and the sound of rifle volleys from the Veterans of Foreign Wars echoing over a Charleston, WV cemetery.

Blizzard died in December 2008 and was buried in January.

A writer and photographer, William Blizzard was the son of Bill Blizzard, the man who led the “Red Neck Army” in the 1921 Battle of Blair Mountain. Although William was a child at the time, he heard stories of the battle while growing up and remembered events surrounding his father’s trial for treason in 1922. The trial ended in acquittal. 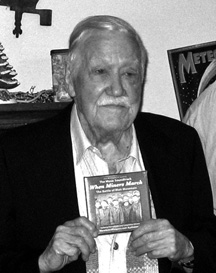 William Blizzard on his 90th birthday in 2006. Photo courtesy of The Charleston Gazette.

Blizzard’s memories and research were published in a series of columns in 1952 and republished by Wess Harris in 2004 as the book When Miners March. Blizzard’s work was the only first-hand account of the Union side of the battle and subsequent treason trials. Blizzard was a living link to one of Appalachia’s most important and least known chapters of history, Harris said.
“Bill Blizzard wrote the definitive story about the struggles of coal miners in Southern West Virginia to win justice for themselves and their families through the United Mine Workers Association,” Cecil Roberts, president of the UMWA, told the Charleston Gazette. “He wasn’t just a bystander, he was there.”

People don’t always associate doing good things for the environment or “being green” with business savvy. According to Ged Moody, Appalachian State University’s Entrepreneur-in-Residence, however, today’s economy means that “going green” is an important way for businesspeople to add value to their products and potentially conserve resources while they’re at it. “You can think green and make green,” Moody says.

This mindset is what prompted the university’s Center for Entrepreneurship to organize a “Realizing Green Business Opportunities” seminar and networking event, set to be held on Tuesday, February 24 at 5:30p.m. on the ASU campus, located in Boone, N.C.

Moody will speak at the event, as will Scott Suddreth, the technical program director with Building Performance Engineering. There will also be presentations by renewable energy and business consulting experts. Following this, nearly 30 existing green businesses, business incubators and related community organizations from the Boone area will be answering questions as part of a casual, networking event.

The intent of the event is to provide interested community members with two important areas of information: a solid understanding of the technologies involved in this emerging area, and how a new or existing business could take part in this “green economy.”
There is no cost to attend, but registration is required. The event will take place in the
Blue Ridge Ballroom in the ASU Student Union, and food and beverages will be provided for all attending.