Coal River Mountain – The Line in the Sand for Mountaintop Removal?

Story and photos by Jamie Goodman

For those who support alternative energy and oppose mountaintop removal, a line has been drawn in the proverbial sand. That line is at Coal River Mountain, West Virginia.

Bulldozers have continued to clear trees and topsoil from Coal River Mountain, a peak that could potentially provide some of the best wind power in the entire state of West Virginia. In late November 2008, a permit was issued to Marfork Coal Company, a subsidary of Massey Energy, to proceed with mountaintop removal coal mining on the top of Coal River Mountain.
Simultaneously, non-profit organization Coal River Mountain Watch (CRMW) hired scientific consultants Downstream Strategies to conduct wind and economic feasibility studies on the mountain, releasing their findings on December 9, 2008. The findings served to cement what CRMW and many local residents had been saying all along—Coal River Mountain is an almost perfect location for setting up a wind farm. 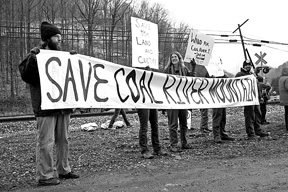 West Virginia residents and conservationists alike flooded the office of state Governor Manchin with phone calls, emails and letters begging him to intervene and rescind the permit and to allow further studies of the wind potential of the mountain. But the Governor ignored public opinion in support of a Coal River Mountain wind farm, and the West Virginia Department of Environment Protection pointedly excluded public comment on the mining permits.
Though pro-mining entities would say otherwise, Coal River Mountain Watch—created when a group of local residents teamed up with environmentalists opposing mountaintop removal—is not opposed to coal mining in general. The overarching message of this organization is to encourage the mining company to mine coal responsibly while pursing alternative energy possibilities. For CRMW, this means underground mining, which creates more job opportunities for local residents than mountaintop removal mining while leaving the mountains relatively unspoiled. Combined with a wind farm, their proposal would create even more jobs for local residents as well as provide another revenue source for Massey Energy.

“This is one of the most progressive environmental movements I’ve ever seen,” said Jeff Deal, IT specialist with Appalachian Voices. “It is a movement that is under-recognized nationally, and it is poised, it is ready.”

But blasting for the first part of the operation could begin at any time, very close to a nine-billion-gallon toxic coal waste sludge dam called the Brushy Fork impoundment. Local residents have expressed concerns about the possibility of blasting causing a catastrophic dam failure at the sludge impoundment. In 1972, a sludge dam operated by Pittston Coal Company failed and killed 125 people in Buffalo Creek, WV. And in 2000, a sludge dam operated by Massey Energy in Martin County, KY released approximately 300 million gallons of coal waste that broke through into underground mines.

The Brushy Fork impoundment on Coal River Mountain also rests above old underground mine chambers. “I fear for my friends and all the people living below this coal sludge dam,” said Gary Anderson, who lives on the mountain near the site. “Blasting beside the dam, over underground mines, could decimate the valley for miles. The ‘experts’ said that the Buffalo Creek sludge dam was safe, but it failed. They said that the TVA sludge dam [near Harriman, TN] was safe, but it failed. Massey is setting up an even greater catastrophe here.” 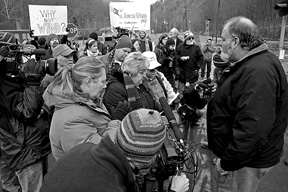 Coal River resident Lorelei Scarbro reads a letter intended for Massey Energy CEO Don Blankenship to a representative from Marfolk Coal Company. The letter insists that Massey Energy cease preparations to blast Coal River Mountain and consider the wind potential of the mountain as an alternative to mountaintop removal mining.

“If they’re going to keep coal here,” Anderson continued, ”they’re going to have to mine responsibly. Who gives anyone the right to blow up the mountains to mine the coal?”

On February 3, 2009, members of the local community, regional citizens, and concerned environmentalists crossed the invisible line in two separate displays of non-violent protest. In the first, five people chained themselves to a bulldozer and an excavator near the mountaintop removal site on Coal River Mountain in the early morning hours. Beside them in the snow lay a large banner that said “Save Coal River Mountain,” and another one saying “Windmills, Not Toxic Spills” hung across the excavator beside a windmill prop. All five individuals, plus a videographer, were arrested, cited for misdemeanor trespassing, and released.

During the second event that same day, several dozen people from the region converged at the mine’s main gate, bearing signs and a letter intended for Massey Energy CEO Don Blankenship which insisted that Massey cease the mountaintop removal operation on Coal River Mountain. A representative of Marfork Coal Company, accompanied by state police, met the protesters at the line—in actuality a set of railroad tracks—and listened to Coal River resident Lorelei Scarbro read the letter intended for Blankenship. Scarbro and seven other protesters then stepped over the line and were arrested for misdemeanor trespassing. The violation carries a fine of up to $100.

Massey Energy company had no official reaction to the protests or to the blasting safety issue, but told the West Virginia Gazette that “if environmental groups think wind projects are such a good idea, they should buy land, obtain permits and build such projects themselves.”

According to Sergeant Michael Smith of the West Virginia State Police, “[The protesters] just wanted to voice their opinion. Some of them indicated to me that with the new president they felt like they could get a bigger voice in the public, and so that’s what they were doing. As long as they’re not violating any laws, they have the right to a peaceful protest. The tresspassing issue, we have to stop that immediately, it’s just breaking the law.”

“We hope this action will reach national media to bring attention to what’s happening in Appalachia,” said local resident Judy Bonds. “It’s going to take action from the federal government. It’s going to take national regulations and the Obama administration stepping in.”

“If Massey Energy wanted to do the right thing,” Bonds continued, “they would withdraw those permits and help us put the wind farm up.”

“We need to go with the better energy option, and that’s a wind farm, which is perfect for Coal River Mountain.” said Gary Anderson. “We could have a green energy future for the country, starting right here.”