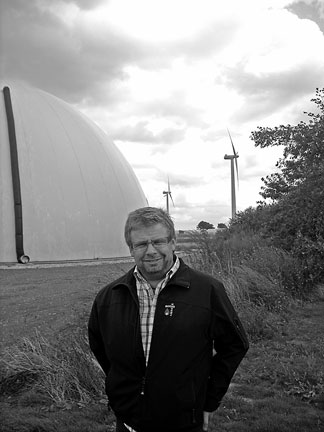 (In September, Appalachian Voice was invited by the governments of Germany and Denmark to see first hand the commitments and the costs of renewable energy development, as the world considers what might be done at the international climate summit planned for Copenhagen in December of 2009.)

A sobering dinner with one of the worlds leading climate scientists — Stefan Rahmstorf of Pottsdam University in Berlin — sets a tone of urgency. As we watch the swans paddle out on a pristine German lake, I think about Rahmstorf’s prediction that at least six feet of sea level rise by 2100 is close to inevitable.

He tells us that if the goal is to limit CO2 from fossil fuels to 750 billion tons over the next 40 years, then the “only fair and just principle here is to assign them on a per capita basis.”  He asks us to picture each person on earth with an allotment of only 110 tons of fossil CO2.

The task at Copenhagen, Rahmstorf says, would be to find a way to get polluting nations to buy some of that CO2 budget from the developing nations, and the way for this to happen is to help them build their renewable energy economies.

Germany is well on its way, we realize, as we pass through wind farms with thousands of slowly spinning blades. From a port whose docks are jammed with wind equipment, we head for Nysted, Denmark, home of one of the first offshore wind farms in Europe.
As I sit up late with the old men in the town pub, drinking akvavit and vitamin juice, I ask them why Danish wind power companies have captured half of the world market.

They answer with pride: “handverk” — craftsmanship.

For more than a century, Danes have worked on wind power the same way that Americans worked on cars and computers:  ground-up crafts tradition. They became so good at it that even Danish college kids beat US aerospace engineers. The Tvind  two megawatt turbine, built in 1978 out of rebar and concrete at a cost of half a million dollars, is still running. In contrast, the MOD-1 of Boone, N.C., was the same size, built at the same time by NASA at 100 times the cost. It was scrapped as a failure after only a few years.

There is craft along with the craftsmanship. In the late 1990s, the town of Nysted opposed the 166 megawatt wind demonstration project in the nearby Baltic Sea. They decided that rather than calling the project Roedsand, for the area offshore, the people of Nysted wanted the project named after them. And when it was finished in 2003, that’s what they called it: the Nysted wind project.

It’s just one example of the commitment at all levels of life here in Denmark to replacing fossil fuels. And, as in other low-lying nations, climate change here is no political football or abstract scientific debate, but rather a life and death struggle for a future above water.

Chasing Copenhagen has involved interviews with foreign ministry officials, business developers, green homebuilders, photovoltaic installation trainers, hydrogen car manufacturers, urban bicycle route planners and many others. Much of it will be posted on the Appalachian Voices and “Chasing Copenhagen” blogs in months to come.
And yet the strongest impression I walk away with is from a simple farm co-operative and biogas plant at Hashoj, about 50 miles west of Copenhagen.

Erik Lundsgaard, plant manager, tours us through a remarkable process.

On one end is a closed off pit, where farm manure, slaughterhouse wastes and other noxious items are thrown into an anaerobic (airless) digester. The mixture produces a 600 btu per cubic foot gas, which is then cleaned up and sent to a 2 MW Rolls Royce electric generator. Along with hydropower from Sweden and Norway, 22 of these Danish gas plants fill in the power gaps when wind isn’t blowing.

The extra heat from the electric generators is sent into a district steam system to warm the homes in the farming village. And the treated solids from the digester are disease free when they come out of the process, ready to be spread on farm fields as fertilizer.

What’s impressive is this integration of farm-scale technology and crafts know-how into the larger renewable electricity grid. The biggest challenge, Lundsgaard says, is to get the right mix of raw materials so that you get the best production of gas.
Even though the biogas plant is held up as a model — it’s been visted by dozens of delegations from around the world — Lundsgaard doesn’t have a lab or a standard manual. He regards the technology with a matter-of-fact attitude.

It’s one more example of how a relatively modest nation, with an ethical commitment to technology and crafts know-how, is developing renewable energy, and in the process, changing  the world.

Americans tried biogas technology and never had much success, in part because of the attitude of land grant universities and federal research agencies towards renewable energy in the past three decades.

As these final lines are written, in November of 2009, the pathetic political stand-off in Washington over climate legislation may mean that the US will not lead the world at Copenhagen.

We know the chase will never be in vain, and those who try never lose.
But it now seems as if American engineering leadership is a lost dream, and high noon for America will be remembered as the moment we backed down and stopped chasing agreements like the one in the offing at Copenhagen.

Appalachian Voices To Make A Virtual Appearance at Copenhagen

Thanks to Google, Appalachian Voices and Coal River Mountain Watch (CRMW) will be one of 15 stories featured at the United Nations Climate Change Conference in Copenhagen this December.

Google Earth designed 3-dimensional interactive tours to help international representatives visualize climate change. The tours feature regions and groups that are devising localized solutions, such as the Coal River Wind Project.
Former U.S. Vice President Al Gore leads the “tourists” through the main tour and introduces them to the other tours—some of the world’s best stories told about global warming through Google Earth technology.

“Google Earth revolutionized the way we tell people about mountaintop removal coal mining,” said Benji Burrell, Technologist for Appalachian Voices. “You used to have to fly in a small plane over the coalfields to see the extent, but now you can take a tour right from your home and get more than you ever would from a plane.”

After viewing the facts and figures, you meet the people-members of the community who share their stories and their support for the wind project.

Many communities that have been affected by mountaintop removal coal mining have health issues related to poor water quality as a result of the blasting. The video relays images of some of the health problems coalfield communities face.

An interesting feature of this innovative tour is that at any time you can pause it and move around Coal River Mountain to learn more about the area.

The conference, COP15, will be held Dec. 7 to Dec. 18 and the film will be available on YouTube.com and at www.google.com/landing/cop15.