While they may not wear a cape or scale buildings, the Native Plant Rescue Squad is saving lives. The nonprofit organization, based out of Knoxville, Tennessee, works with builders, developers and landowners to rescue native plants that would otherwise be destroyed.

The squad headed out to a road development site in Powell, Tennessee, in July to see what native species existed on a multiple-acre site before construction began. They searched for local flora to rescue and eventually re-home. The team was nearly able to fill the bed of a pickup truck with orange and yellow perennial butterfly weed, a known pollinator favorite.

Volunteers arrived that evening at the organization’s homebase at the Knoxville Botanical Gardens to help “pot up” the rescued plants. The evening’s work also included potting up black-eyed Susans, yarrow, wild petunia and St. John’s wort, which had all been rescued from a different location. 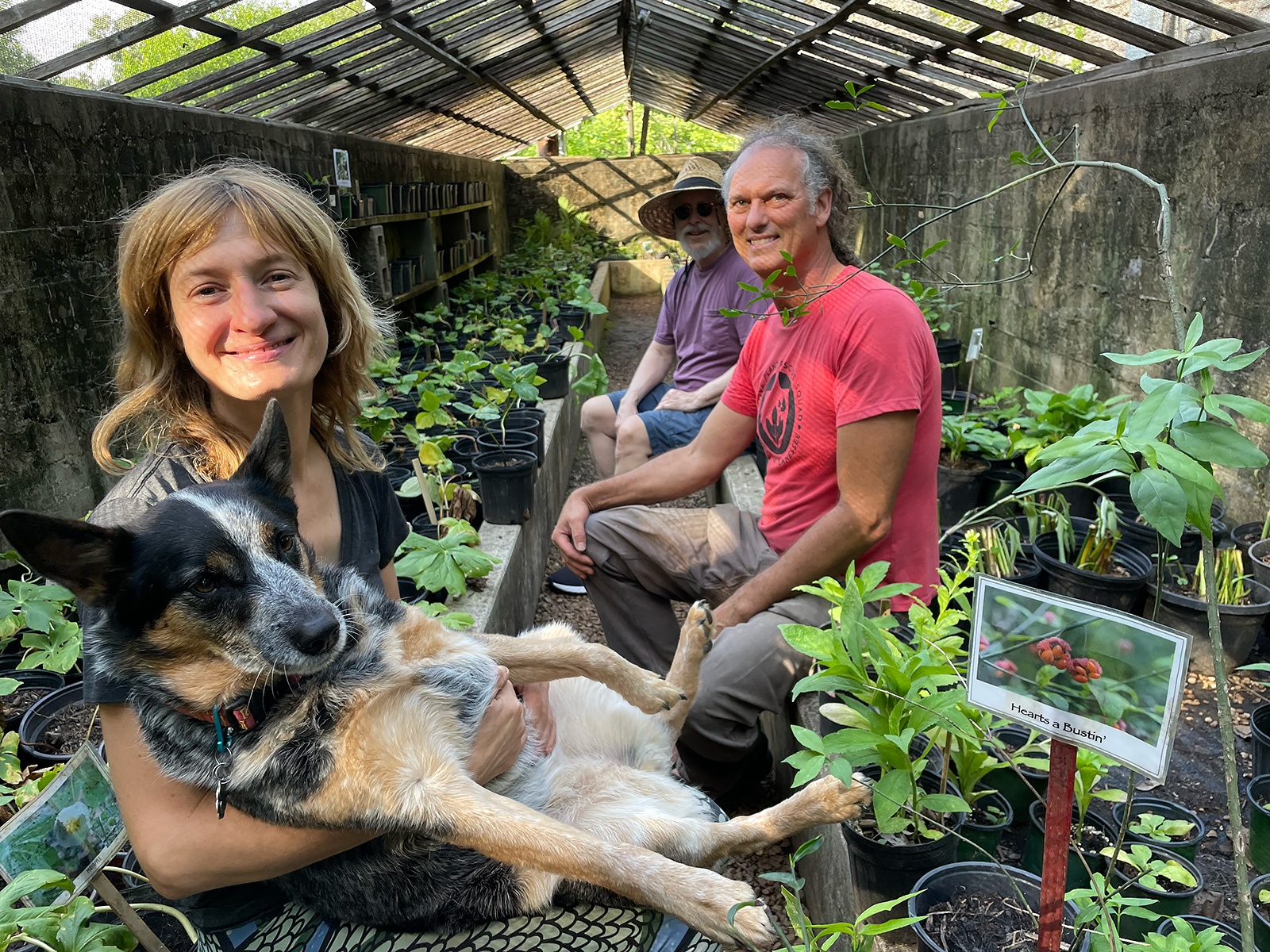 Native Plant Rescue Squad founders Joy Grissom and Gerry Moll with volunteer Jay Armbruster at the nonprofit’s home base at the Knoxville Botanical Gardens. In 2021, the nonprofit rescued more than 5,000 native plants. Photo by Mindy Cooper.

Co-founders Joy Grissom and Gerry Moll had been hiking buddies and friends with a shared expertise in plants before they joined forces to create the Native Plant Rescue Squad after witnessing development’s impact on native plants. Neither could shake the feeling there was something they could have done to save the plants killed in the development process.


So, in 2015 they created the rescue squad with a two-part mission to preserve and restore local ecosystems by rescuing native plants from harm’s way while educating others about the rich diversity and benefits of native flora in East Tennessee.

Their first big rescue was at a property with more than 100 acres that was set to be clear-cut. When they arrived, Grissom recalls being overwhelmed by their opportunity.

“I had never seen such a diversity of selections and possibilities,” she says. “We learned so much.”

Seeing the benefits of rehoming these plants and rebuilding local ecosystems lit a fire inside of them.

Today, more than 150 species of native plants are growing at the group’s homebase, ready to be relocated. They attribute their success to the generosity of landowners, community collaborators and people’s care for their local environment.

During the first six months of 2022, they carried out more than 10 rescues, saving countless plants at no cost to the landowners.

“By the time we get there, the bulldozers are already lined up,” says Moll. “So it is about doing the best we can.”

To find new homes for the rescued plants, they partner with landowners, businesses, nonprofits, schools, farmer’s markets, co-ops and area greenhouses, like the beloved Stanley’s Greenhouse.

But Moll explains that the group’s purpose extends beyond simply saving these plants’ lives. It’s also about building a relationship between people and their environments.

“It’s really about affecting culture and bringing people into relationship with the amazing biodiversity that is here,” says Moll. “That is really how we make the most impact.” 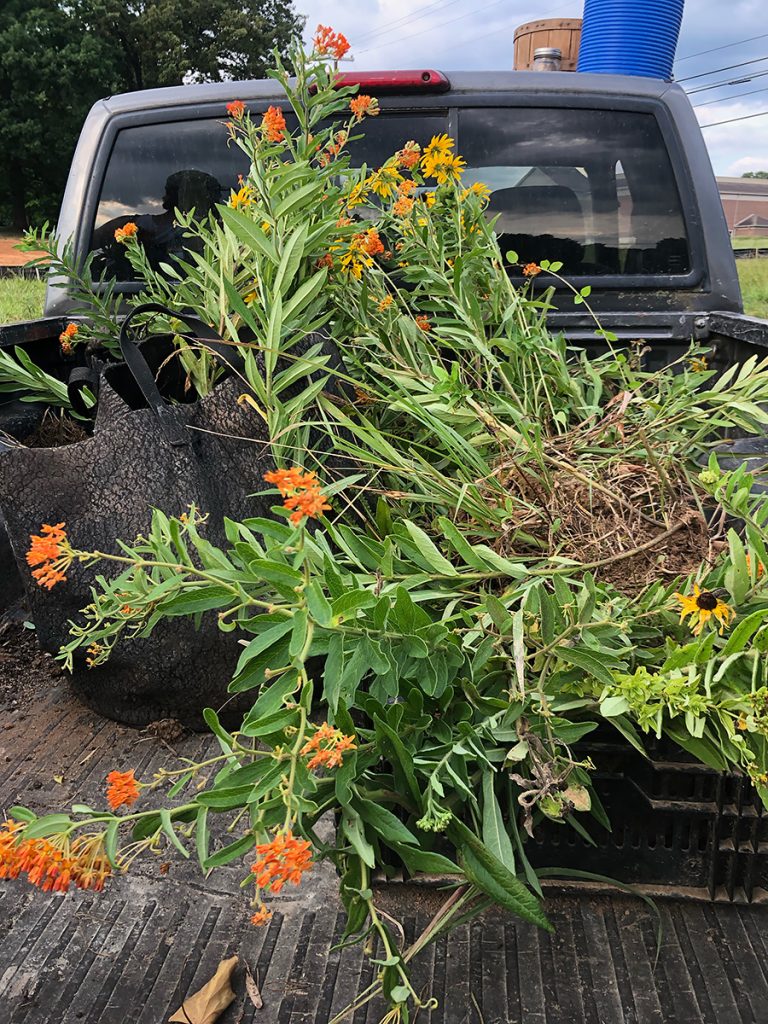 But not just anyone can harvest and sell native plants. Native Plant Rescue Squad has permits and is insured with the Tennessee Department of Agriculture, which allows them to enter contractual relationships with landowners to dig in designated areas.

The licenses were originally created to decrease the threat of spreading pests to agriculture, according to Anni Self, plant certification administrator with the Tennessee Department of Agriculture. Years ago, she recalls, people would also make a living collecting wildflowers and selling them, which often destroyed area habitats.

Today, Self says the way people see their environment is shifting thanks to better access to information and organizations like the Native Plant Rescue Squad.

She explains that a yard with native plants is less susceptible to disease than a yard that is only turf grass.

“I would love to see more pollinator plants going into green spaces and more diversity instead of just a green lawn and shrubs in front of a house,” Self says. “It would make the world so much more interesting.”

The benefits to landscaping with native plants include water conservation, reducing the need for pesticides and fertilizers, and ease of maintainence compared to exotic plants. It also allows people to learn about their own environments and its history in a new way.

“We have a special purpose, because you are touching people and actually changing their perspective with these plants,” Grissom says.

Longtime volunteer Doris Gove re-pots mountain mint into one-gallon black containers while she explains the importance of maintaining wild plants for pollinators like butterflies and bees during a volunteer work day.
“There is so much bulldozing and destroying that we are hardly touching the problem,” she says.

Grissom expressed gratitude for the many squad volunteers like Gove. “We couldn’t do the work we do adding biodiversity to our neighborhoods without them,” she says.

“Everything we do, we think about as a workshop or learning opportunity,” explains Moll.

Rescues, for example, are not simply about getting plants, they are also about educating volunteers about the flowers or shrubs, so they can then share that knowledge with the larger community.

When asked what he hopes for in the future, Moll says he wants to see a change in priorities towards supporting local ecology and building habitat instead of only planting a beautiful flower.

It all relates back to their larger goal, he says, “helping reconnect people to themselves through the natural world.”