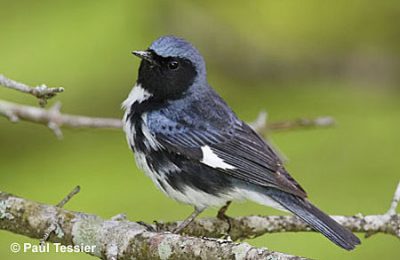 With a face more yellow than green, the Black-throated Green Warbler can often be seen between delicately needled hemlock branches. The songbird’s olive markings streak across its head and back, the jet black bib is surrounded by a white belly and grey wing feathers. It is the second most common warbler in the Southern Appalachians.

“To us ornithologists they are the champagne of the bird world,” says Louise Weber, environmental studies professor at Warren Wilson College. “They are the most beautiful, and the most difficult to identify.”

Weber says this species—along with the Black-throated Blue Warbler and the Acadian Flycatcher—relies heavily on the Eastern Hemlock for nesting and breeding, a tree that is disappearing from Western North Carolina landscapes due to the Hemlock Woolly Adelgid (HWA).

A non-native insect introduced from southern Japan in the 1950’s, the HWA is an aphid-like insect that fatally infests hemlock trees by feeding on its sap. The immediate effect of this forest loss can be easily noticed, as entire hillsides are left bare within just a few months of the insect’s arrival, leaving miles of somber skeletons in its wake. But the loss of this conifer has greater implications than can be seen by the naked eye, and will have long-lasting consequences for the forests in which it once thrived.

First noticed in northern forests, the disease has spread south down the Appalachian mountain chain at a fast pace. Since the climate in the southern Appalachians is similar to that in southern Japan, the Adelgid has done faster damage in this region than in other affected areas.

Alexander Evans, who completed his doctorate dissertation at Yale University on the ecological effects of the HWA, says that some stands in Connecticut had been affected by the Adelgids for 15 years and are still thriving. “Some trees [have] died,” he says “but the hemlock [is] still playing an important ecological role.” In northern states, the disease has been spreading a few kilometers per year; in the south, as much as thirty kilometers annually.

Evans says it’s difficult to say whether the loss of one species is directly linked to the problems faced by another. Yet Evans has recently found clear correlations between the disappearing hemlocks and other species in the forest.

He says it’s important look at the role that hemlock plays in its ecosystem. “In many forests, it can be one of the few conifers,” he says. “In the winter, especially, it provides a unique habitat for wildlife.” The hemlock’s thick canopy keeps snow off the ground and shelters against weather, therefore it is crucial for many mammals. “It’s not like hemlocks are their only food source,” Evans says, “but it will make their lives harder.” Some species are able to adapt relatively well. Deer, for example, have been able to convert to finding habitat in suburban areas. “It’s the more sensitive species in the forest interior that are going to suffer,” he says.

Other recent forest losses have included the chestnut blight in the early 20th century which wiped out much of the American Chestnut population, a key hardwood species at the time. Dogwoods and Butternuts have also recently been affected by disease. Evans says the hemlock loss is just one more stress on the ecosystem. “On a holistic level, the effect of all of these losses on a forest already loaded down with stresses [is debilitating],” he says. “Add climate change, and the function of the forest is in jeopardy.”

David Buehler, a professor of wildlife sciences at the University of Tennessee, has been studying the effect of the HWA on birds in the Blue Ridge Mountains. “When the [HWA] started to become an issue in the early 2000’s and we saw what was happening further north, we started documenting the species [associated with the hemlocks]. Some species in danger, he says, include the Black-throated Blue Warbler and the Blue-headed Vireo.

Weber says that the Acadian Flycatcher population is decreasing because of the loss of their habitat in Latin America.” In the past, she has been reassured by the fact that their breeding ground has remained intact, but now there is more reason for concern. “[The Acadian Flycatcher] is definitely a species whose numbers are in decline,” she says. “They’re very specific.”

David Orwig, a Forest Ecologist at Harvard University, also believes that Acadian Flycatcher populations will suffer as hemlocks decline. Orwig, who completed post-doctorate work 14 years ago on the effects of the HWA on northeastern forests, says that 90 percent of Acadian Flycatchers nest in the affected conifers. “If these species spend more of their time in hemlocks, and the majority of these hemlocks disappear, then their habitats are going to be restricted,” he says.

The losses within the avian community will be felt—and audibly missed—by residents in Western North Carolina. “Hemlocks are an important component of forest ecosystems, especially in the Smokies, says Dr. Buehler. “The significance here is tremendous.”