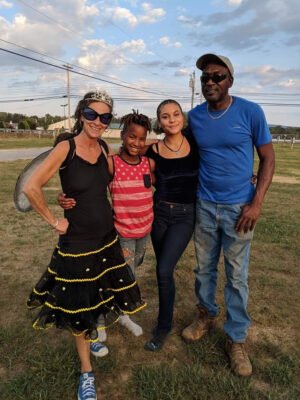 The Bargman family. From left to right: Ashly, her grandson Myron, her daughter Aisa, and her husband Ellie.

“What we love about the bees is that everything they do is for the good of the whole,” says Ashly Bargman.

Bees are known for their intelligence and complex societies. But without their strong system of cooperation, none of what they do would be possible. Each bee has a part to play, and every role is vital to the success of the hive.

Ashly lives by this philosophy. Whether it is giving presentations about the importance of pollinators, distributing copies of The Appalachian Voice or envisioning new ideas on how to give back to her community, she tries to do her part as much as possible. In her eyes, we are all in this together.

Ashly lives up the mountain in Renick, W.Va., with her husband, daughter and grandson. The family runs up to 50 honey bee hives on their property as a part of their business, Another Season Honey Farm.

Ashly and her husband started beekeeping in Florida, but they lost their bees to Roundup, an herbicide that has been linked to bee deaths. After living in West Virginia for five years, they still have problems with bee-killing chemicals, people stealing their hives and the mysterious colony collapse disorder, which is affecting hives across the world. However, the challenges of beekeeping only inspire Ashly to keep fighting for a better future.

After she first lost bees, Ashly became an activist with Millions Against Monsanto, a campaign fighting against agrochemical companies like Monsanto. For the past 10 years, Ashly has presented at schools, libraries and other venues about bees and sustainability. She dresses as a queen bee, complete with stripes and a crown, and brings an assortment of costume choices for her audience.

Ashly says she dreams of building a small community educational center on her property. It would serve as a space to educate people about pollinators, teach them to make beeswax products like candles and even allow smaller beekeepers to extract their own honey. She is currently searching for a grant to make this vision a reality.

Apart from running the business, Ashly and her family also keep a small garden, live off the mountain as much as possible and distribute 800 copies of each Appalachian Voice to nearby locations. She believes that the newspaper helps spread important messages that are not always included in mainstream media. According to Ashly, as more people become aware of environmental issues, the “voice” calling for a better future will grow stronger.

“It’s to educate our family and our community, so that we can work together,” Ashly says about the paper. “That’s why I do it. So that we can be this Voice!”
In her version of the future, the Appalachian region joins together to eliminate nonrenewable resources, preserving the “wild and wonderful” in places like West Virginia.

“We need our natural places,” she says. “To be wonderful people, we’re gonna need some wild. And we need to protect that.”

Everything comes back to the bees. They dedicate their whole lives to the good of the whole, and Ashly believes that we should, too.

“I get emotional every time I say it, because, golly gee! If those little bees can do it, gee, why not us?”