In a Nutshell: A Native Forage With Potential 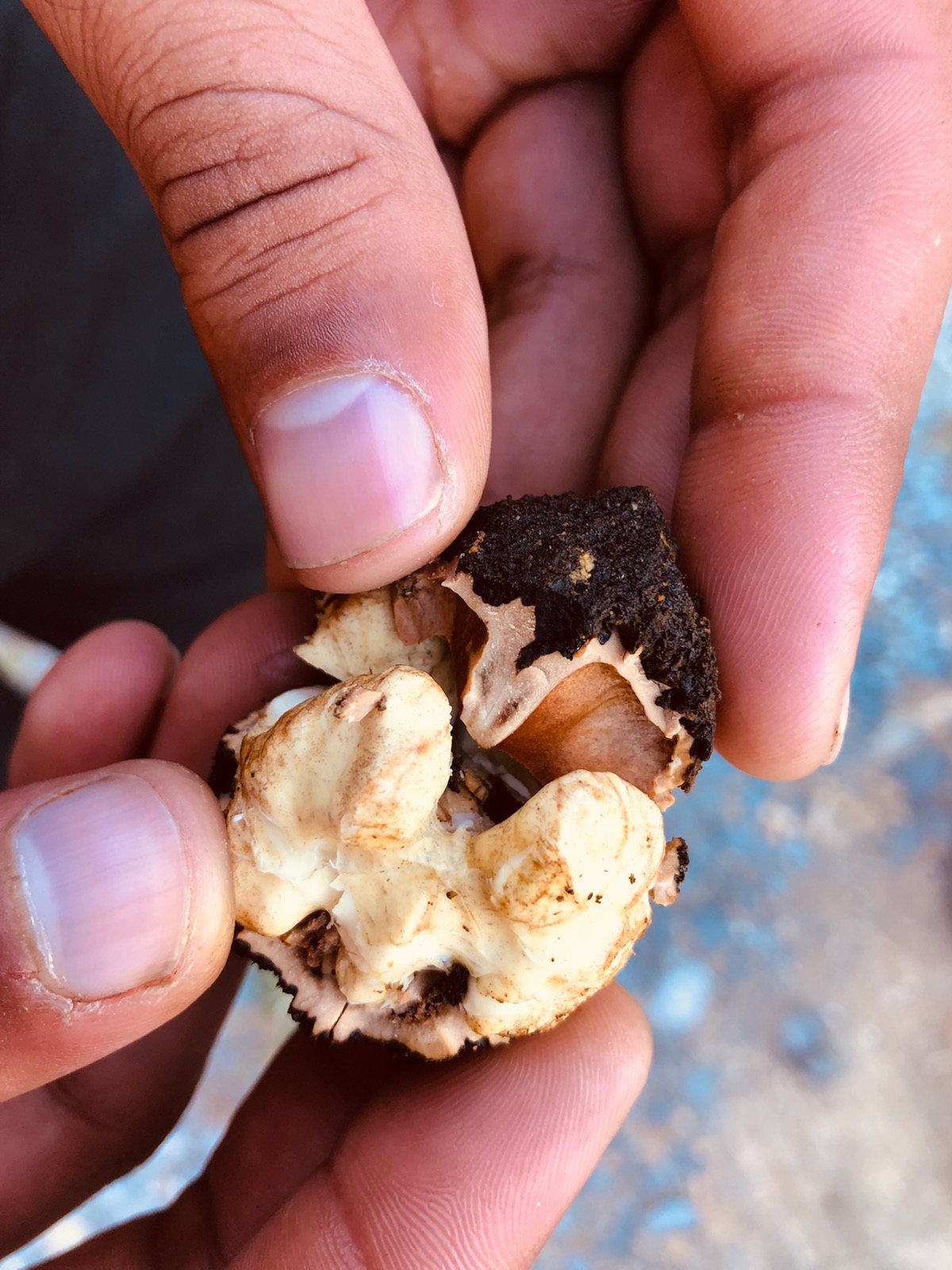 There are many cultivated black walnut varieties, including the hay variety pictured here. Photo by Aaron Grigsby

This year, like every year in Western North Carolina, acorns sprawl across lawns and parks, and spill over sidewalks; black walnuts rain onto cars and roofs; hickory nuts roll over wooded trails and slip underfoot. But some foragers are saying that the abundance of nuts this year is more than normal. This year could be a mast year in Appalachia for oak trees and black walnuts, they speculate—which is a year in which the trees overwhelm the environment with nuts, producing more than predators could possibly eat. Animals are able to fill their bellies with enough nuts left over to grow into new trees.

While many might stumble and trip over the proliferation of nuts, a growing community of perennial agriculturists encourage others to see that there is food all over the ground. The Asheville Nuttery, a project of the Asheville-based business Nutty Buddy Collective, is a hub for that community. Located at Smith Mill Works in West Asheville, North Carolina, the nuttery has evolved to help tap this perennial food source.

A Tough Nut to Crack

“It’s going to be a pretty good pin oak year and maybe black oaks,” says Justin Holt, one of the Nutty Buddies and a co-owner of the nuttery, along with Greg Mosser and Bill Whipple. “I’m hoping that we’ll have some more acorn oil available, which we haven’t had. We didn’t get any oil oaks last year, so yeah, pretty excited about that.”

In early October, Holt is overseeing preparations at the facility; the nut harvest is just getting started. Periodically, participants drop off a load of nuts into bins. Holt records their deposit and, on the other side of the process, they will be paid with a portion of finished nut products or cash.

Beverly McBrayer, who has been bringing in nuts for the past 4 years, arrives with two bushels of white oak acorns she picked up from her yard. It weighs 83 pounds, bringing her total this year up to 218 pounds. It’s a family tradition for her to make black walnut cake for Christmas, which is what initially brought her to the nuttery. Her relatives once used the forage as a survival food during hard times, she says.

“Last year my grandchildren and I drove around and picked up around 500 pounds of black walnuts and brought them here,” she says. “Then we swapped those for black walnuts that we could eat, which was a good deal.”

Ricky and Murray Sill are next, bringing baskets of black walnuts from four large trees in their yard. “Normally I just put ‘em in a wheelbarrow and go dump them down in the bamboo,” says Ricky Sill. “We get 10, 12 wheelbarrow loads every year.” 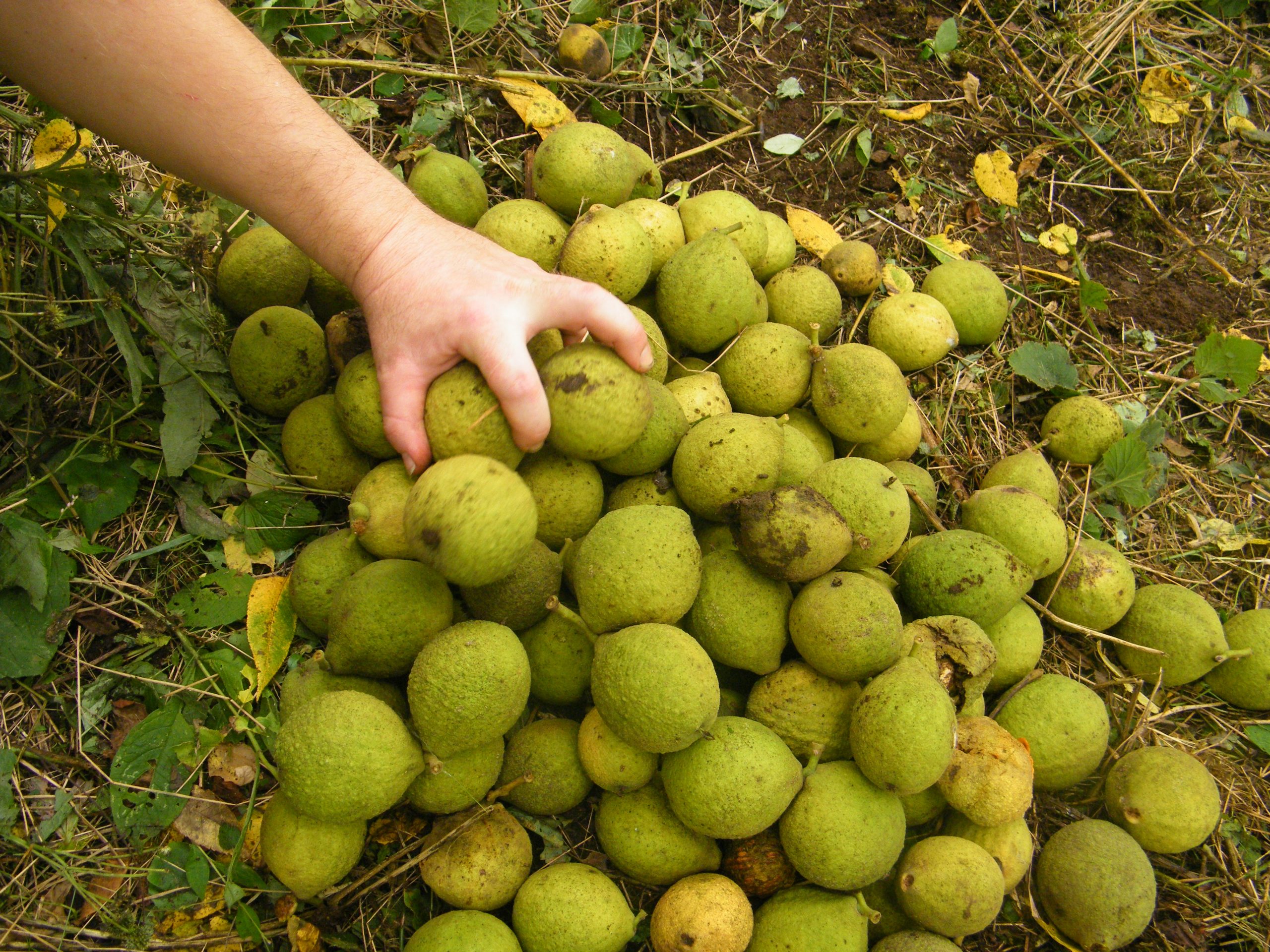 Black walnuts are by far the most common nut for people to bring in. “It’s maybe 95 percent black walnuts in terms of weight,” Holt says, thinking of 2020. “It was like 8,000 pounds of black walnuts, maybe a few hundred pounds of the other nuts. That’s how it always is.”


That’s because people are picking black walnuts up anyway to get them out of their yards, Holt explains. But at the nuttery, what was once trash becomes treasure.

One of the main reasons that this natural food gets left on the ground every year is that these nuts can be hard to deal with. Acorns have to be leached in water to remove the bitter tannins, black walnuts have a stubborn hull, and both black walnuts and hickories are notoriously tough to separate from their shells.

Those are the hurdles that the Asheville Nuttery exists to overcome. Much like the grain mills of an older era, the nuttery is a hub where people can take their nuts to get them to a usable state. Holt and his co-owners are developing and tweaking processes to more efficiently handle the various wild nuts. They can sort them, leech them, crack them, grind them into flour and press them into oil. Locals just have to pick them up and bring them in.

According to co-owner Bill Whipple, the potential of native nuts is far from realized. These neglected nuts, he suggests, could serve as a dietary staple and substitute for their annual counterparts such as wheat and corn. “Anything corn can do, an acorn can do better,” he says.

Whipple points out that acorns were once an important staple in this region. In Indigenous communities, native forest foods, especially acorns, were essential crops. Appalachia, particularly in its southern and low-lying regions, is a primarily oak-dominated forest, according to data collected by the World Wildlife Fund, so it seems natural that acorns would emerge as a staple food. Not only are they plentiful, but they are easy to store and generally high in carbohydrates and fats. White oaks tend to have higher percentages of carbohydrates, making them ideal for grinding into flour, and red oaks tend to be higher in fat, making them better suited for pressing into oil.

Whipple, who is always dreaming bigger, was inspired to expand his work at the Asheville Nuttery in pursuit of a broader, nut-based agriculture. His Acornucopia Project seeks to perpetuate native nut agriculture by developing regional nut processing facilities. That could be as simple as a depot for storing collected nuts or something with more processing capability, similar to the Asheville Nuttery. The idea is to give people the tools to harvest this natural abundance.

However, Whipple cautions, anyone who has been out foraging can tell that some management is required.

“Go out there for a half an hour and try to pick up acorns in the leaves and brush and try to make a living off of that, no freaking way, dude,” he says. “The only place you can forage is where there is basically a mowed lawn like a college campus or a church or a cemetery or a park.”

He refers to the history of Native Americans using controlled burns to clear the understory, leaving an open space where they could efficiently gather nuts — a method in line with the swidden agriculture many communities are believed to have used, alternating burns and fallow periods to maintain woodlands. 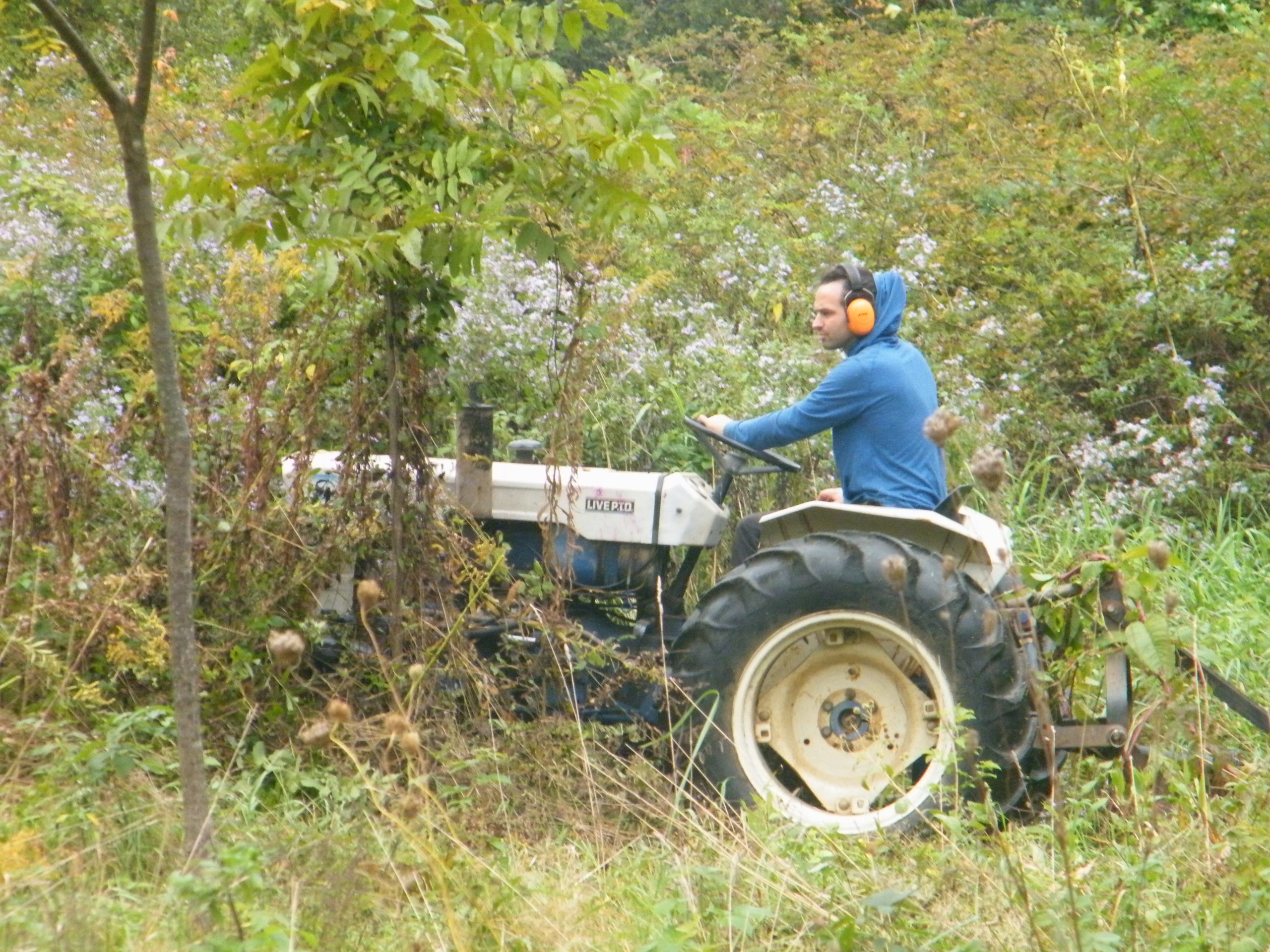 Forest management is integral to Whipple’s goal. He believes that perennial agriculture is the path to a healthier planet.

“We’ve got to stop cutting trees down for food and start planting trees for food,” he says. “If we start supplementing our food with tree-based agriculture, that’s less land that’s going to be in corn and soybeans, so that there is also sparing the planet a lot of wear and tear — not to mention all the benefits that are happening when you plant trees.”

Whipple contends that if society has a less extractive reason to value native forests, one that involves growing trees instead of cutting them down, it will ultimately encourage communities to improve forest health over time. John Munsell, a professor in the department of forest resources and environmental conservation at Virginia Tech, offers some support for this idea.

“Generally speaking, high-grading has been the, kind of, status quo when it comes to harvesting in our mixed species woodlands,” Munsell says. High-grading refers to the practice of harvesting the strongest trees in a forest, which effectively selects for weaker forests over time.

“We are losing thousands of acres of forest lands where that forest is removed in its entirety,” Munsell says. “But that pales in comparison to the total amount of acreage that has continued to decline in terms of health and productivity due to high grading, even though the canopy remains. You might say, oh, there’s a forest there. Well, the health of that forest has been negatively impacted over decades due to poor harvesting practices.”

The agroforestry model and other sustainable forest management practices, however, can have the reverse effect, incentivizing protecting and preserving the strongest, healthiest and most productive trees.

The way Whipple and the Nutty Buddies see it, the benefits of agroforestry are obvious and endless. For one thing, trees improve the soil while conventional annuals deplete it.

“It’s like night and day, dude,” Whipple says. “The reason why we have topsoil is because the trees have been building soil. So basically all the corn that we’re growing, we’re sort of living off of the savings of all those tens of thousands of years of trees.” 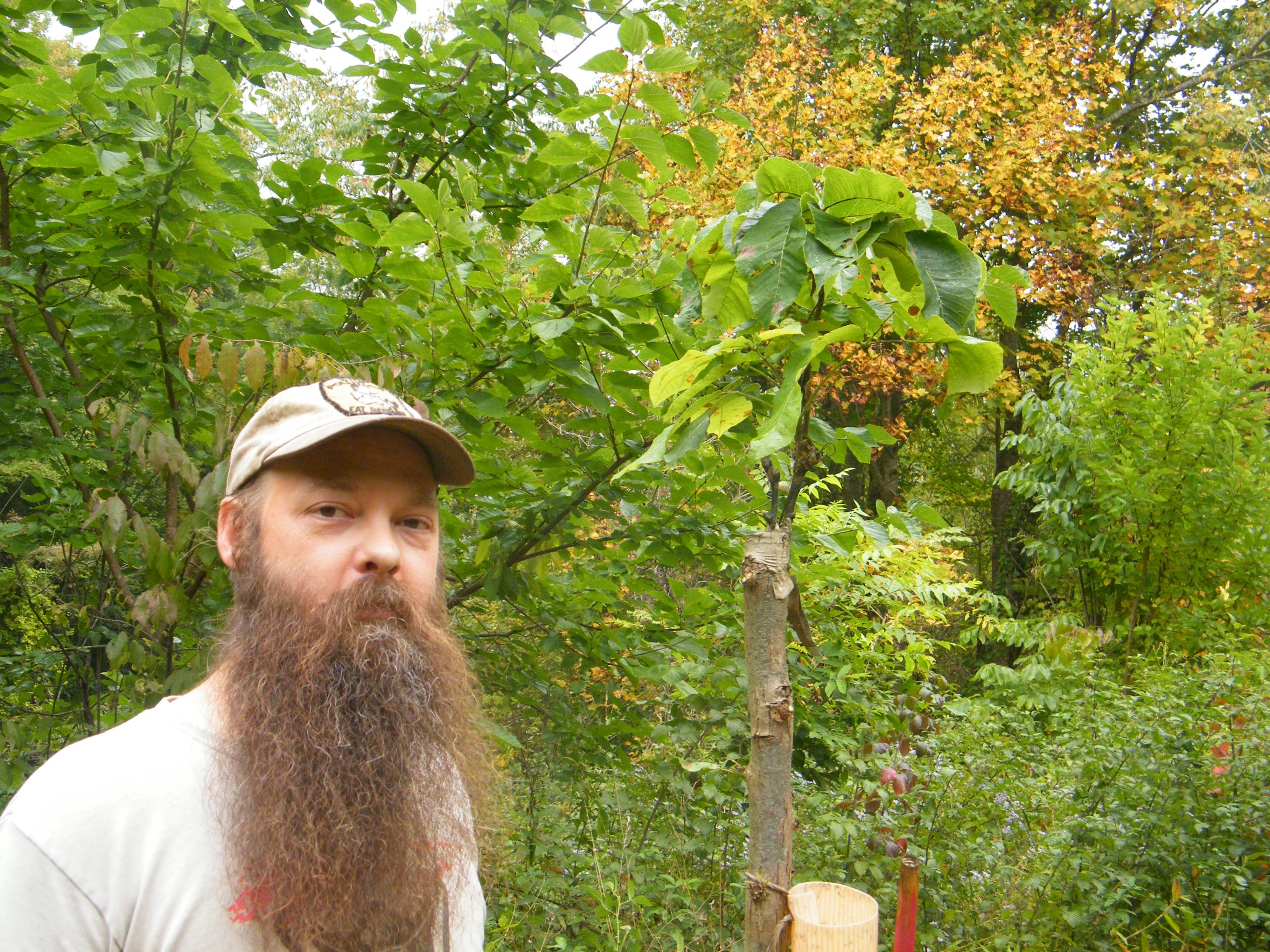 Trees are not just a crop, but a component of a healthy ecosystem. They re-mineralize soil with their deep roots, prevent erosion, prevent sediment from polluting waterways and support hundreds of species of wildlife. The list goes on, but one of the one of their most important roles could be in the fight against climate change.

Living trees are approximately 50 percent carbon by weight, according to the University of Illinois extension. “And nut trees are the best carbon-sequestering trees that we have because they’re dense wood, and if a tree is producing a high value nut, it doesn’t get cut down,” says Holt.

Every year, as a tree gets bigger, it puts on a larger ring of wood and pulls more carbon out of the atmosphere, turning it into wood, roots, and leaves that eventually work their way back into the soil.

“There will be no invention that man can ever come up with that will be more efficient than nature’s 400-million-year-old invention of trees pulling carbon dioxide out of the air and putting it in the soil — that’s ridiculous,” Whipple says.

The challenge, according to the Nutty Buddies, is time. It’s difficult for people to invest in something that’s going to outlive them, especially in a culture that measures profits on an annual timescale.

“We have an annual kind of culture,” says Holt. “Annual species are pioneer species; we have a pioneer ethos in America.” 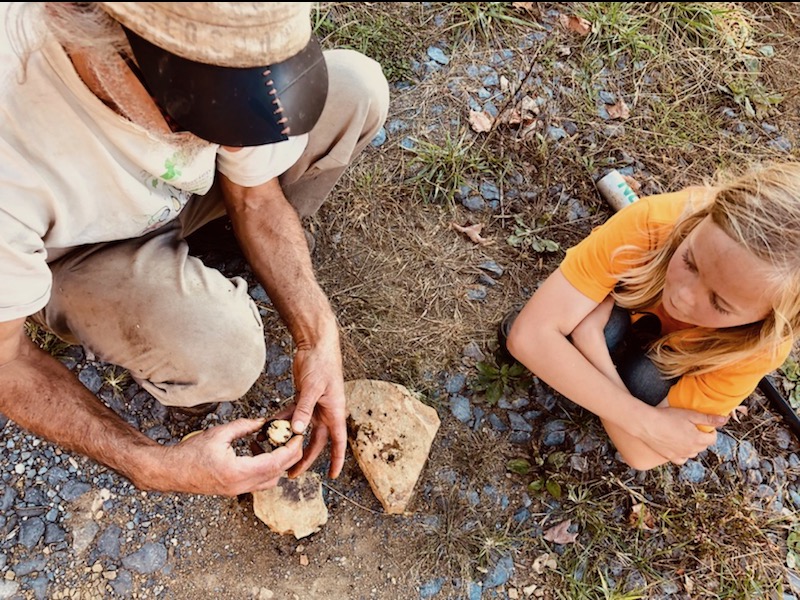 Bill Whipple shows his son the inside of a black walnut. Photo by Aaron Grigsby

Holt contends that annual crops are the norm because they have a quick, short-term return on their investment. Whipple shares a similar sentiment.
“Breeding nut trees up to be more efficient is a multi-generational task,” he says.

But when orchards outlive the orchardist, they more often than not fall by the wayside. Again and again, Whipple has encountered orchards that were started and abandoned after 25 to 30 years — relatively young in the lifespan of trees.

“99% of the orchards that I [know of] have been bulldozed down,” Whipple says. “It’s just what happens.”

Through their collective model, the Nutty Buddies hope to overcome that fate. With collective ownership, the value of their project can be multi-generational, too.

“So this is generational food security,” says Holt. “If we can really get a lot of folks excited about growing these trees, maybe my grandkids could be eating them.”

In the face of increasing environmental threats and concerns, the Nutty Buddies propose that perhaps now is a time that demands the kind of hope a tree provides: hope for and investment in the future.

“There’s no problem a tree can’t solve,” Whipple says. “There’s an old rabbinical saying that I love, thousands and thousands of years old. So they say: ‘when the end of the world is coming, plant a tree.’”