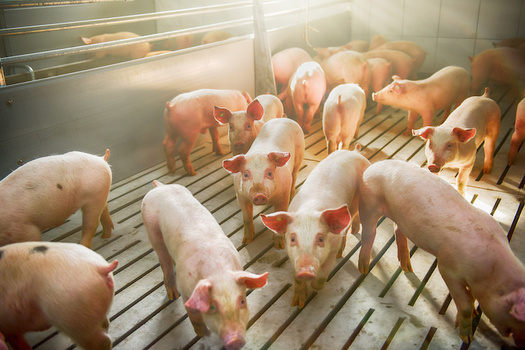 FAYETTEVILLE, N.C. — After the first settlement of its kind in North Carolina capping limits on emissions from a biogas plant in Sampson County, environmental advocates hope the agreement sets the stage for stricter statewide regulation of the processing of animal waste from concentrated feeding operations into fuel or biogas.

“We hope that the state takes a page out of the work that we’ve done here, to really protect the communities where these projects will be sited,” Porter urged.

The plant, run by Align Renewable Natural Gas — a company created by Smithfield Foods and Dominion Energy — will connect to more than a dozen hog-farm operations and generate and collect methane and other gases from large amounts of animal feces and urine for processing as an energy source.

The settlement between CleanAIRE NC, the North Carolina Department of Environmental Quality and Align RNG requires the plant to limit sulfur dioxide and hydrogen sulfide emissions.

Daisha Williams, environmental justice manager for CleanAIRE NC, said the company also will have to report its emissions to the state.

“So that the public can verify they’re staying in compliance and not emitting over the levels they’re not supposed to be emitting in,” Williams explained.

Porter added additional safeguards in the settlement will help ensure local communities are not saddled with the long-term health consequences of poor air quality.

“It creates a mechanism that requires the company to monitor their methane leaks,” Porter stated.

Williams noted sulfur-dioxide and hydrogen-sulfide exposure have been linked to serious health problems, and said harms can worsen when hog waste processed in covered pits for use as biogas is transferred to open lagoons and sprayed on nearby fields.

“To be able to limit those pollutants and limit exposure will hopefully help over the long term to contribute to better health outcomes,” Williams asserted.

Research shows North Carolina’s Black, Latino and Native American populations are most impacted by air pollution from concentrated feeding operations, which are predominantly located in low-income and minority communities.

According to one study, people of color in North Carolina are nearly twice as likely to live within three miles of an industrial hog farm compared with white residents.