It was a foggy morning on March 24, in the valley bisected by Highway 460, near the town of Elliston, Virginia. Several dozen local residents gathered on the southbound side in ongoing protest of the Mountain Valley Pipeline — a hotly contested 42-inch-wide pipeline carrying fracked gas from wells tapping the Marcellus and Utica shale in northern West Virginia to Pittsylvania County, Virginia. The rally formed in support of two tree-sitters blockading the path of the pipeline from one of the last sections of trees along its 303-mile route. A little bit up the road, police were working to extract the remaining tree-sitter.

The two tree-sits — each consisting of a platform anchored to a tree 50 or more feet above the ground, continuously occupied by a rotation of volunteers, and supported with food, materials and communication by a base camp on the ground — contested MVP’s right of way, preventing construction from proceeding. The tree-sits had remained for 932 days, with activists enduring three winters, snow, ice and turbulent weather, but a November injunction by a Montgomery County Circuit Court prompted law enforcement to clear out the base camp, leaving the two tree-sitters on their own. 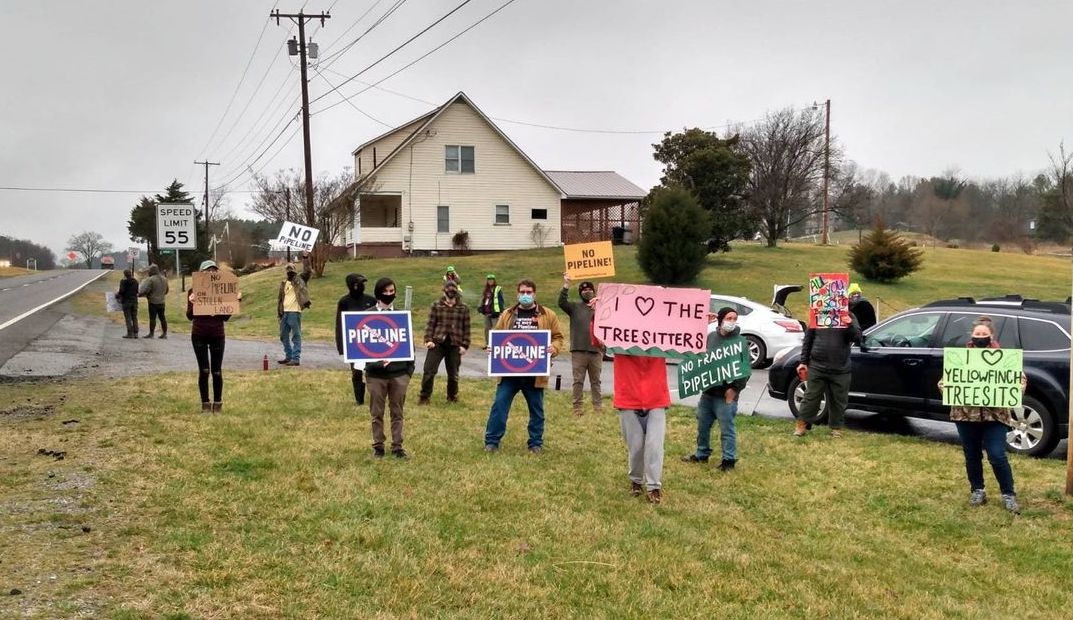 Supporters of the Yellow Finch Blockade showed up across the highway from the police barricade on March 24. Photo courtesy of Appalachians Against Pipelines

At 7 a.m. on March 23, police and work crews shuttled in a crane to be assembled at the end of Yellow Finch Lane, the gravel road at the base of the tree-sits from which the protest took its name. They successfully extracted one of the two tree-sitters, known by the alias Robin. Now, on the following morning, supporters were awaiting news of the second, whom they referred to as “our friend, Acre.”


Police blockades walled off the road from the valley to the tree-sits deeper in the mountains, and, according to the group of protesters, police were spread out through the woods denying access to supporters, witnesses and media. That’s why the band of sign-waving supporters were clustered at the closest accessible point to the action — on the side of the highway, across from a police barricade where officers monitored who went in and out.

In more than three years of conflict with the MVP project, this pattern had become familiar to protesters. A similar process of tree-sit, injunction, extraction had unfolded at other points along the route such as Peters Mountain and near Four Corners Farm. But outrage was still palpable and intermittent shouts could be heard across traffic at the police checkpoint: “Why are you here? Go home,” “No pipeline,” and “They don’t live here; we live here.”
As police ushered work vans through the police line, the crowd’s heckling punctuated their angry sentiment that the law was siding with corporate interests.

“You know, my tax dollars — I pay Virginia state tax — my taxes pay for that road, and now I’m no longer allowed to go across that road, but the pipeline is?” said protester Jammie Hale. “I was born and raised here. My family goes back a couple hundred years in Giles County. And these people over here with their badges and their guns, if they don’t want to protect it, by God, we will.”

Hale, who has been opposing the Mountain Valley Pipeline for several years, summed up his frustration as a feeling of being “rolled over” by the project and the state power backing it, a feeling that was made too tangible for him that day by the police perimeter.

“We’re being criminalized for trying to save the environment, and clean water, and clean air for the next generation,” Hale said.

Hale and his friends could only guess at how the extraction was progressing. Out of sight from where protesters were allowed, hired tree workers were advancing in a massive crane to cut out the remaining tree-sitter, who had locked themself to the tree, authorities would later report. For now, people scanned the vehicles going in and out of the police checkpoint from their side of the highway, looking for clues about what was going on. Around noon, someone spotted what they thought to be the tree-sitter’s escort to the local jail. Less than an hour later, the local news station confirmed it: the final tree-sitter had been removed and taken into custody. Later that day, the trees they were defending were also cut down.

Both tree-sitters were subsequently charged with two misdemeanors, obstruction of justice and interfering with the property rights of another, and held without bail.

Yet, spirits remained high among the band of supporters, even as they splintered and dispersed. The arrest was not a defeat, they maintained, but the conclusion of a triumph. 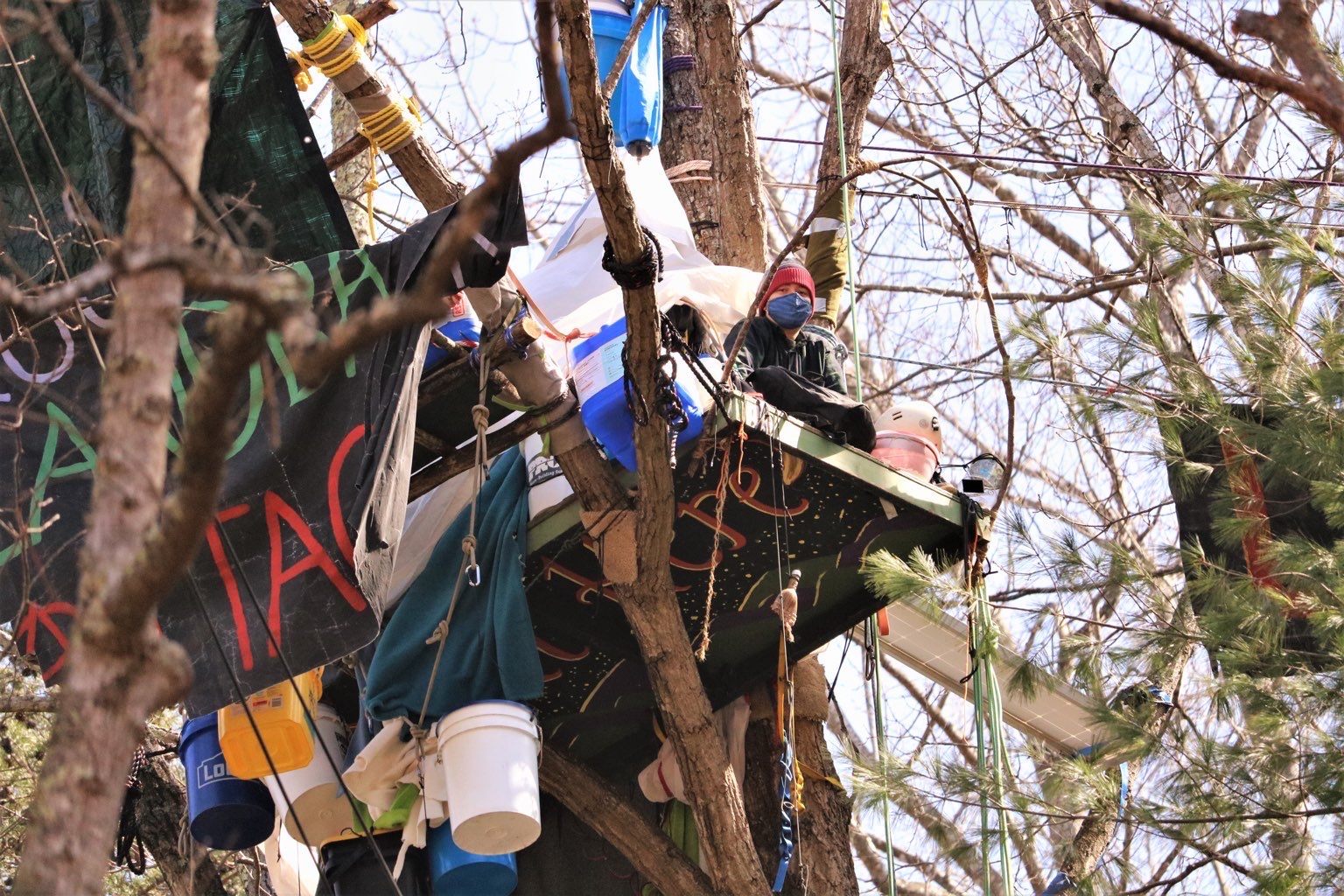 Acre remains in their tree-sit at Yellow Finch on March 23, the day that fellow tree-sitter Robin was extracted. Photo courtesy of Appalachians Against Pipelines

Counting 932 days, this tree-sit marks the longest in the campaign around the Mountain Valley Pipeline, and one of the longest in American history — supporters point to Julia Butterfly’s 738 day occupation of a coastal redwood in Northern California for reference. Add that to earlier blockades of the pipeline, including on Peters Mountain and near Four Corners Farm, plus MVP’s loss of multiple permits in court due to deficiencies in the companies’ permit applications and construction practices, and the delays have pushed MVP’s estimated completion date back by at least two years. When construction began in January 2018, the company projected it would be completed by the end of 2019. Now, the company has set their sights on the end of 2021, and analysts say it is likely to be longer.

During that time, the landscape has changed for MVP and similar pipeline projects across the country.

On day 93 of the Yellow Finch tree-sit, Virginia Attorney General Mark Herring filed suit against MVP for “repeated environmental violations.” On day 406, the Federal Energy Regulatory Commission issued a stop work order on any new construction while federal agencies reevaluated impacts on certain endangered species along the route. On day 669, developers of the nearby Atlantic Coast Pipeline cancelled their project amid similar resistance. On day 670, a federal judge ordered the controversial Dakota Access Pipeline to cease operations. On day 868, the incoming Biden administration revoked the permit for the long-debated Keystone XL pipeline.

Sixty-four days later, as Virginia State Police and Montgomery County Sheriffs evicted the tree-sitters at Yellow Finch Lane from the path of MVP, supporters emphasized on social media that the extraction would not erase their impact. Opponents of the pipeline have reason to hope that their grassroots resistance will help stop the multi-billion dollar pipeline project as it faces growing economic, legal and practical challenges. 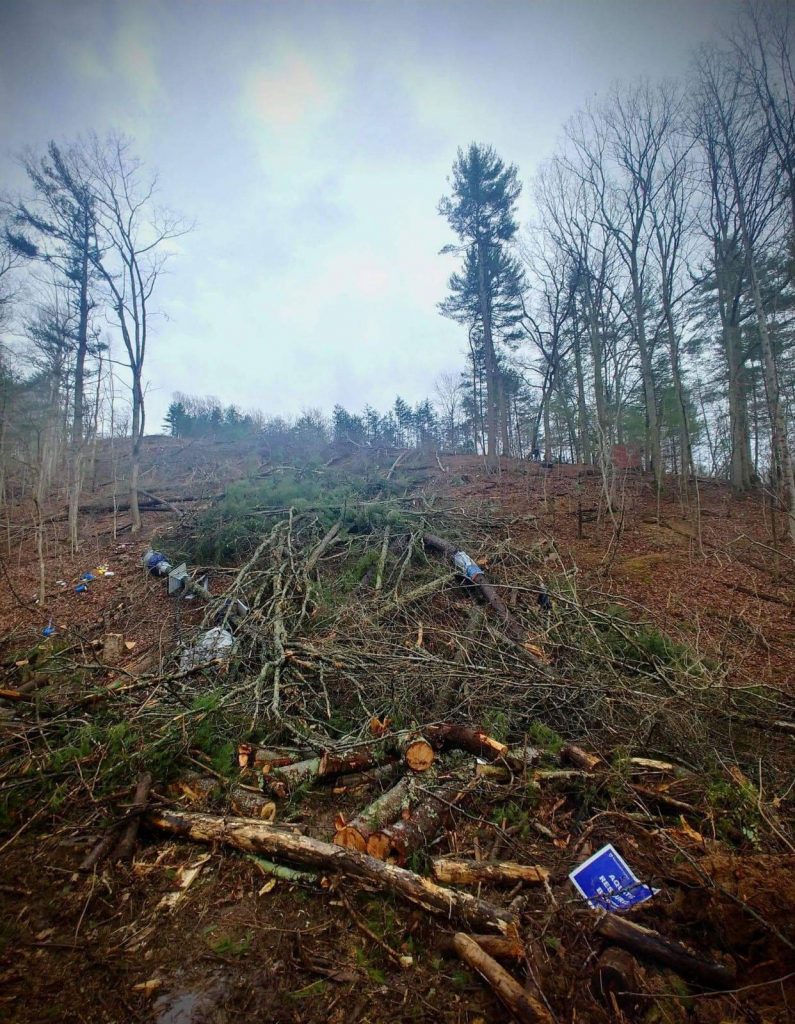 Felled trees cover the ground on March 26, 2021, at the former site of the Yellow Finch tree-sits. Photo courtesy of Appalachians Against Pipelines

The Allegheny-Blue Ridge Alliance, a coalition that aims to protect the heritage, resources and economy of the region, estimated in July that 52% of the pipeline is fully complete and restored, rather than the 92% reported by MVP. The company must still obtain new permits from state and federal agencies in order to build across streams and wetlands. Until April 15, FERC was accepting public comments on MVP’s request to change its 2017 permit to allow it to bore beneath approximately 180 streams and rivers in Virginia and West Virginia. There is also a pending legal challenge to the permit that allows MVP to cross the Jefferson National Forest.

The proposed MVP Southgate extension, which would extend the pipeline into North Carolina, also faces challenges. In August 2020 the North Carolina Department of Environmental Quality denied Southgate a necessary North Carolina water quality permit. The decision is currently being challenged in court. At this time, grassroots groups also are organizing to stop the proposed Lambert Compressor Station in Pittsylvania County, Virginia, which would damage local air quality.

Robin, one of the two tree-sitters removed from Yellow Finch, wrote in a statement after their arrest, “With my arrest, this one instance of resistance, this one physical place that is an enactment of our dreams of another world will fall. But these tree sits were one place out of many that have existed and that will exist, and the flames of resistance cannot be extinguished this easily. The fight continues, and the struggle for a better world always will.”

Appalachian Voices does not fund, sponsor or engage in activities such as tree-sits and pipeline blockades.