Changing the structure of a tax on coal that funds federal benefits for miners could bring tens of millions of dollars annually to the cash-strapped Black Lung Disability Trust Fund.

Money raised from the Black Lung Excise Tax provides benefits for thousands of miners with black lung disease and their families when the companies responsible for their condition have gone bankrupt or closed. But the excise tax does not apply to exported coal, and miners and advocates are calling for a different tax structure to solve the problem.

The coal industry has experienced a wave of bankruptcies starting around 2014 that has had the effect of releasing some operators from their obligations to workers, and revealing that others never posted sufficient insurance with the Department of Labor to honor obligations to their miners. This leaves the Black Lung Disability Trust Fund on the hook for providing black lung benefits and healthcare coverage for more miners, just as increased exposure to silica in the mines is causing the frequency of black lung to spike in Appalachia.

In 2020, more than 18,000 miners and their families relied on the Black Lung Disability Trust Fund. Yet the fund itself has been insolvent for years, digging ever deeper into debt. In 2020, the fund spent $339 million in benefits and administrative costs, but the excise tax only generated $301 million, leaving a tab of $38 million with the general treasury and the American taxpayer.

In 2019, the shortfall was even greater. Trust fund revenues were only $217 million and benefits and administrative costs totaled over $326 million. 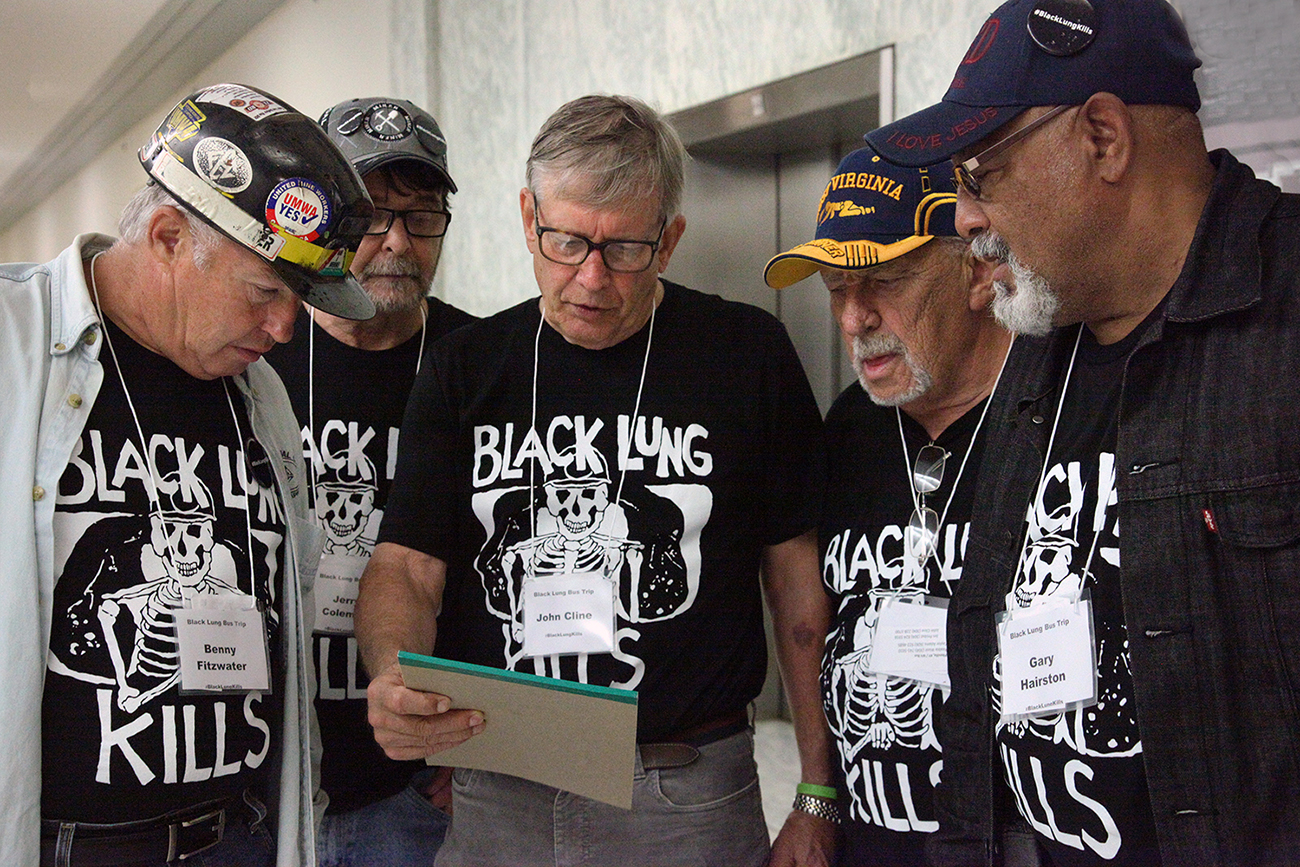 Miners went to Congress in 2019 to press for black lung benefits. Photo by Earl Dotter

In total, due to revenue shortfalls since the inception of the black lung program, the Black Lung Disability Trust Fund is more than $4 billion in debt to the general treasury.


Despite this, the coal industry has pushed Congress to cut the excise tax in half, arguing that the current rate is too burdensome. But this move would, in all likelihood, add over $100 million annually to the trust fund’s already astronomical debt, according to Appalachian Voices projections based on 2020 coal production levels. These efforts were successful in 2019, before grassroots pressure from the Black Lung Association and others — including Appalachian Voices, the publisher of The Appalachian Voice — compelled Congress to reinstate the full tax rate for one year at the end of 2019, and again at the end of 2020. The Black Lung Association is now pushing Congress to extend this tax rate for 10 years.

While miners and coal companies continue to fight over the rate of the Black Lung Excise Tax, there’s another way the industry is shirking its responsibility to workers with black lung. This is the export loophole.

There is a clause in the U.S. Constitution preventing Congress from taxing exported goods, so the black lung fund does not receive any tax dollars from coal that is mined in the United States but sold overseas. However, while an excise tax applies to the sale of a product, a severance tax applies to the extraction of a natural resource. In other words, if Congress were to pass a law establishing a Black Lung Severance Tax in place of the current Black Lung Excise Tax, this would apply to all coal mined in the United States.

“Just because coal is exported doesn’t mean the miners didn’t get black lung when they mined it,” says Bethel Brock, a retired miner with complicated black lung, and president of the Norton, Virginia chapter of the Black Lung Association. “The black lung tax needs to be applied where the coal comes out of the ground. It doesn’t matter to the miners struggling to breathe if it ends up going on a boat or not.”

Even with declining coal markets, advocates believe that replacing the excise tax with a severance tax is one remedy that is needed to address the financial requirements of the chronically insolvent trust fund.”It’s a straightforward and fiscally responsible way to boost trust fund revenues,” says Rebecca Shelton of Appalachian Citizens’ Law Center, which represents coal miners filing black lung claims. “Over 50% of exported coal is metallurgical coal and we can expect that the metallurgical coal market will not decline as precipitously as the thermal coal market.” 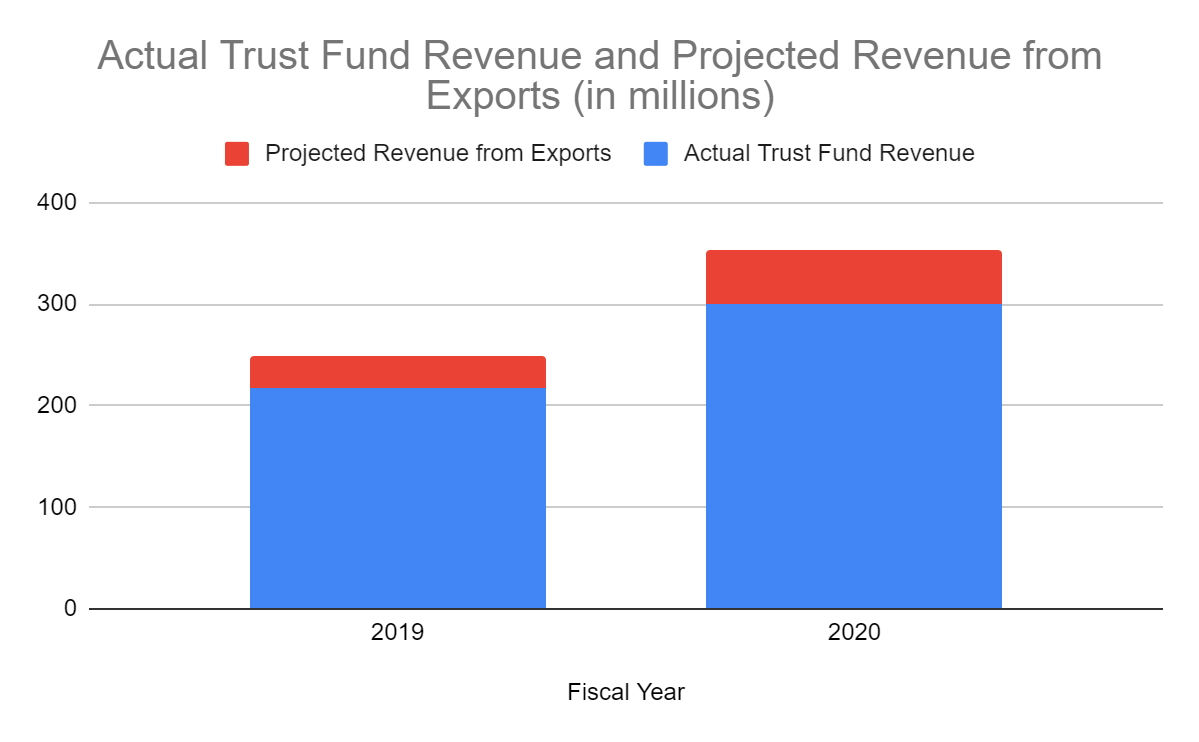 In fiscal year 2019 and 2020, revenue from exports would have increased total revenue for the Black Lung Disability Trust Fund by tens of millions of dollars. Chart by Rebecca Shelton, Appalachian Citizens’ Law Center

U.S. coal mines produced just over a half a billion tons in 2020, and about 13% of this coal was exported. If the origins of that exported coal were similar to overall production in that roughly 64% was surface mined and 36% was mined underground, then changing the excise tax to a severance tax would have brought in about an additional $51.5 million to the Black Lung Disability Trust Fund in 2020. This would have more than covered that year’s $38 million shortfall.

“It’s disgusting how these companies will do whatever they can to not pay what they ought to,” says Brock. “We’ve got to save this Black Lung Trust Fund so that the miners working today are taken care of when they get sick, and we need to make the companies pay a severance tax to do it.”