Mountain Valley Pipeline, LLC, is no longer pursuing a one-size-fits-all federal stream crossing permit. On Jan. 26, pipeline developers announced plans to instead seek individual permits for each of the nearly 500 streams and wetlands in the 303-mile fracked gas pipeline’s path in Virginia and West Virginia.

The change comes after a deadlocked vote from the Federal Energy Regulatory Commission that prevented MVP’s request to bore under 77 miles of the route in West Virginia and circumvent missing water protection permits. The individual permit request also comes soon after a decision by the Virginia Department of Environmental Quality to no longer allow gas pipelines with a diameter of 36 inches or more to use the blanket authorization, called a Nationwide Permit 12. The Mountain Valley Pipeline’s diameter would be 42 inches wide if built.

In November, the U.S. Fourth Circuit Court of Appeals suspended MVP’s Nationwide Permit 12 from 2017. This decision was the result of a lawsuit filed by Appalachian Mountain Advocates on behalf of several environmental groups including Appalachian Voices, which produces The Appalachian Voice. The court also suspended the permit in fall 2018 when developers failed to show that they could comply with a West Virginia requirement that construction through water bodies not exceed 72 hours.

The company behind the embattled Mountain Valley Pipeline continues to face legal and regulatory challenges as construction remains at a halt along much of the pipeline’s route. 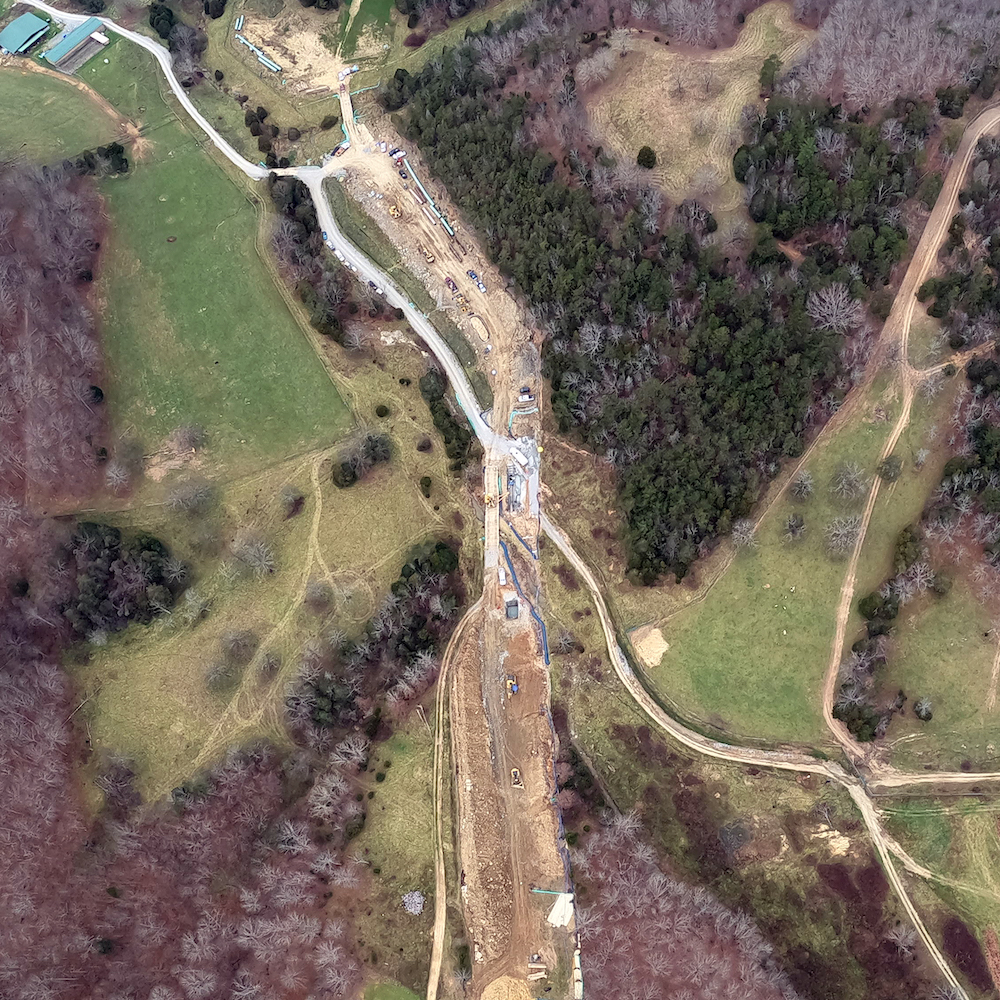 In late January, Appalachian Voices and several other organizations asked the U.S. Circuit Court of Appeals for the District of Columbia to suspend MVP’s renewed FERC certificate that extended the project deadline by two years in October. The groups also requested the court to reverse FERC’s lifting of recent stop-work orders on most of the pipeline’s route. Since MVP is not planning to start construction until Feb. 25, the groups asked for the court to rule on the matter before then.

On Jan. 11, eight community and clean water groups including Appalachian Voices and the Monacan Indian Nation sued to reverse a U.S. Forest Service decision to allow MVP construction through the Jefferson National Forest. The groups allege that the decision was rushed through under political pressure in the last days of former President Donald Trump’s administration.

“The Forest Service, under pressure from the pro-pollution Trump administration, shirked its critical responsibility to preserve and protect special lands held in the public trust,” Appalachian Voices Virginia Field Coordinator Jessica Sims said in a press release. “Ignoring impacted community members and thousands who voiced opposition, the agency has shamefully broken its own rules to rubber stamp permissions for the ruinous MVP.”

Learn about other environmental and energy bills in the Virginia General Assembly this year.

On Feb. 17, the Virginia House Committee on Agriculture, Chesapeake and Natural Resources passed two bills that would strengthen water quality regulations for fracked-gas pipelines. The state Senate passed both bills on Feb. 5. S.B. 1265 would permit a full stop work order for a pipeline in Virginia if problems are frequent or widespread and would allow the state to inspect land-disturbing activities for any pipeline with a diameter greater than 24 inches. S.B. 1311 would require potential developers to include erosion and sediment control plans in addition to stormwater control plans, with their state-level permit applications, instead of after potential permitting. A vote from the full House of Delegates is expected before the General Assembly session closes on Feb. 26.

The Virginia Department of Environmental Quality is accepting public input on a proposed compressor station for the fracked-gas Mountain Valley Pipeline Southgate in Chatham, Virginia. MVP Southgate would extend the unfinished 303-mile Mountain Valley Pipeline by an additional 75 miles into North Carolina’s Rockingham and Alamance counties. The DEQ held a virtual public hearing on the 29,000 horsepower Lambert Compressor Station on Feb. 8, and is seeking written comments through March 10.

Appalachian Voices and other opponents of the compressor station cite numerous concerns with the project. These include: a lack of information from MVP regarding hazardous air pollutants; the cumulative air quality impact from the Lambert station and two nearby Transco compressor stations; discrepancies between MVP’s environmental justice analysis and the compressor station permit; noise pollution and more.

In Montgomery County, Virginia, protesters continue to defy a court injunction to leave several tree-sits in the path of the Mountain Valley Pipeline. Activists have continuously occupied several tree stands on a rotating basis since September 2018, preventing developers from completing pipeline work in the area.

A county judge ordered the tree-sitters to leave in November 2020, finding them in contempt of court and subject to fines. The judge also gave law enforcement the authority to remove the protesters but did not specify when that might happen.

President Biden’s administration signals a turning point for federal oil and gas policy. On his first day in office, Biden signed an executive order canceling the permit for the controversial Keystone XL Pipeline that would have carried crude oil from Canada and through the Midwest. The order also requires federal agencies to review environmental actions taken by former President Trump’s administration.

FERC’s Jan. 19 tied vote that pushed MVP to change course and seek individual water permits centered around developers’ request to bore directly under waterbodies in West Virginia. The measure, which came to a 2-2 vote, would have allowed MVP to get closer to use of the first 25 percent of the pipeline while legal disputes around the Virginia portion played out. 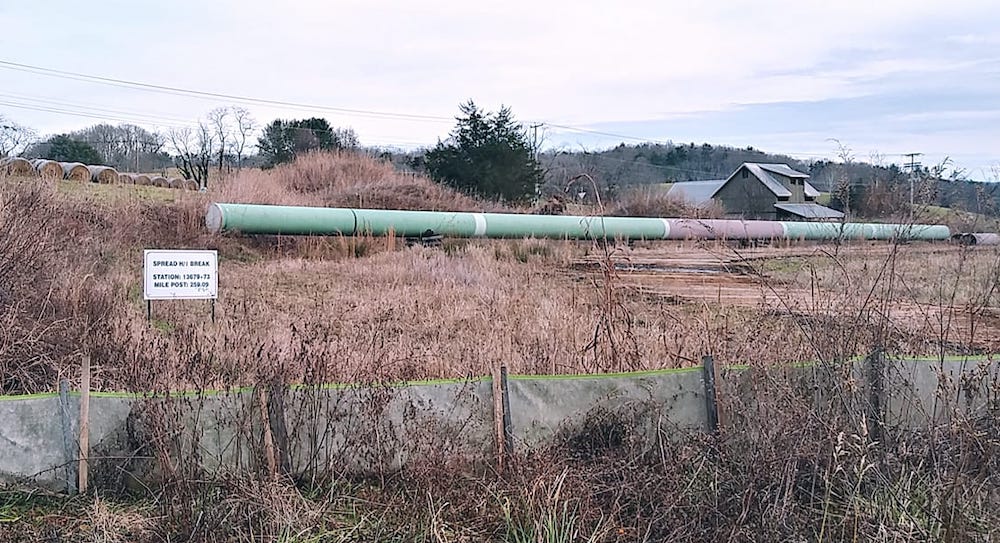 “It is exceptionally rare for an order to be put up for a vote and fail,” Natural Resources Defense Council staff attorney Gillian Giannetti told the Roanoke Times in January. NRDC is an international nonprofit environmental organization.

On Jan. 21, President Biden named Richard Glick as chair of FERC. Glick has served as a FERC commissioner since 2017, and has been critical of the Mountain Valley Pipeline in the past. Glick has previously stated that the pipeline should not resume construction unless all permits were in hand.

Cleaning Up After the ACP

Although the utilities canceled the $8 billion project last summer due to numerous legal challenges and delays, workers had already felled approximately 222 miles of trees and installed around 31 miles of pipe along the project’s 600-mile route. Duke and Dominion plan to abandon the laid pipe and restore the areas where the right-of-way was disturbed. The companies also stated that they plan to keep landowners informed of the project’s scope and schedule as it progresses.

However, the plans do not address the easement agreements that landowners signed granting rights for the ACP to be built on their property. Dominion Energy spokesperson Aaron Ruby told the News & Advance in January that ACP plans “to keep easements to the greatest extent possible.” Ruby also told the publication that ACP was not seeking to sell the agreements to other interested parties at the time.

Editor’s Note: This story was updated on Feb. 9 to include information about legal filings against Mountain Valley Pipeline in the U.S. Circuit Court of Appeals for the District of Columbia, and to bring information regarding the Lambert Compressor Station up to date. The latest news on two water quality bills in Virginia was also included.