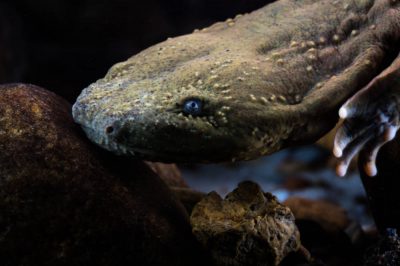 To support biologists studying Eastern hellbenders, the N.C. Wildlife Resources Commission is asking people to report sightings of the aquatic salamanders, sometimes referred to as “waterdogs” or “snot otters.” Native to mountain streams in the Appalachian region, hellbenders can measure up to a foot long and are considered bioindicators — species that are particularly sensitive to the health of an ecosystem.

As Eastern hellbenders breathe through their skin, they are threatened by poor water quality and habitat degradation. Due to this, their presence or absence can provide a measure of water pollution levels. The commission asks that people who see one of these rare creatures refrain from disturbing the hellbender as they note its location and take a photograph. The information can be emailed to Lori Williams, a wildlife diversity biologist with the commission, at lori.williams@ncwildlife.org. — By Hayley Canal