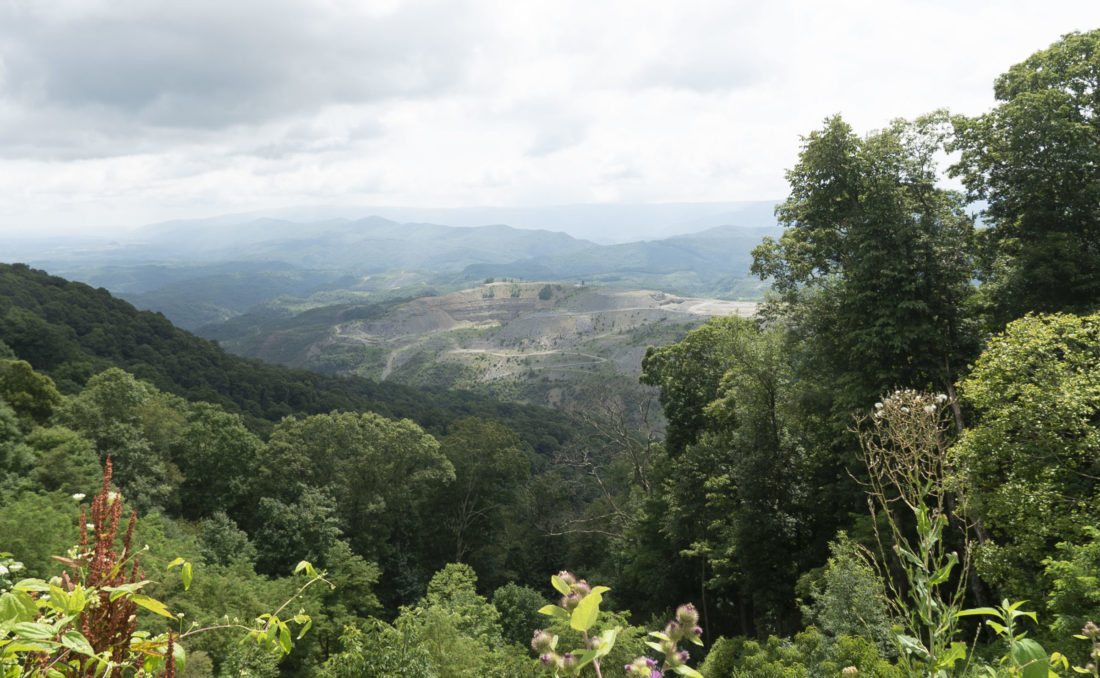 View of the Looney Ridge surface mine from atop Black Mountain. Photo by Brittany Patterson

Standing at an overlook on the top of Black Mountain — the tallest point in Kentucky — the wooded Appalachian mountains stretch on like a sea of green for miles.

For many, this mountain is synonymous with the coal industry. It straddles the state line separating Harlan County, Kentucky and Wise County, Virginia, two communities that have long relied on mining the black gold contained in its depths.

Among the lush forests, barren, brown spots dot the landscape, a testament to this history. These are coal mines, created when the tops of these mountains were removed. From the top of Black Mountain, one sprawling mine and its towering high wall dominate the view.

“So, we are currently looking at Looney Ridge surface mine number one,” says Matt Hepler, an environmental scientist with the advocacy group Appalachian Voices. 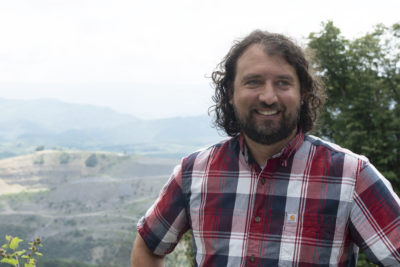 Hepler has for years been following action, or lack thereof, at the Looney Ridge mine, which is operated by A&G Coal, a coal company run by the family of West Virginia Gov. Jim Justice.

Coal has not been produced here since at least 2013 when A&G Coal asked Virginia regulators to place the mine in what is called temporary cessation. The permit status allows mining to pause, giving mining companies flexibility on requirements for land reclamation until it becomes more economically feasible to begin extracting coal again. And, as the name implies, this idling of mines is supposed to be temporary.

An analysis of mine permit data conducted by the Center for Public Integrity finds Central Appalachia is home to about half of all idled coal mines in the country. CPI found more than 200 mines are idled across West Virginia, Kentucky, Tennessee, and Virginia. About half have been that way for three or more years. Warehousing mines using this permit status throws workers and nearby communities into limbo all while crucial environmental cleanup is delayed. 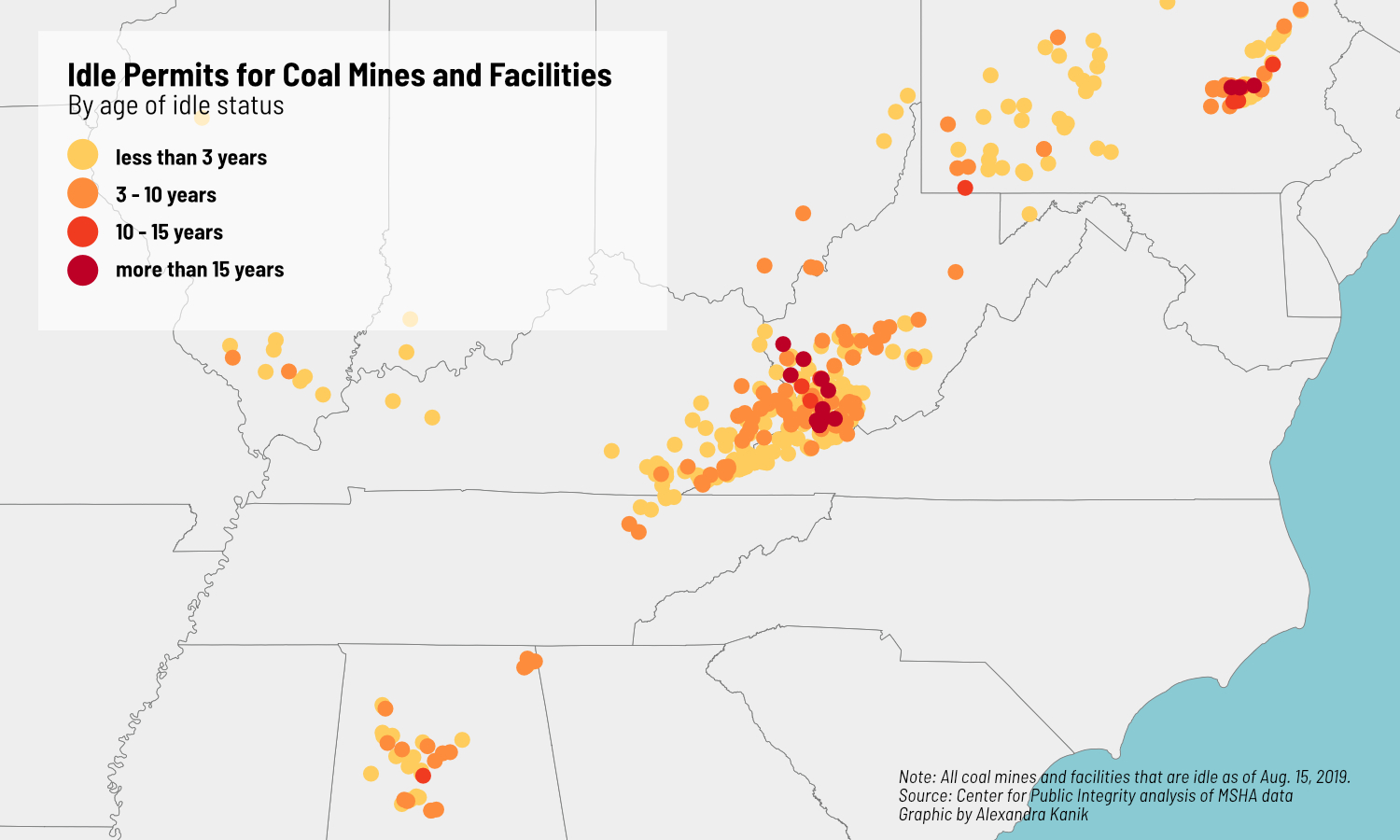 The analysis shows that the Justice companies are the nation’s most frequent users of coal mine idling. Thirty-three mines and a coal preparation plant owned by the Justice family’s companies were idled as of mid-August. Fifteen of those have been in that status for at least three years, according to CPI’s analysis. In West Virginia, one Justice mine in McDowell County has been idled for almost a decade.

That number doesn’t include the Looney Ridge mine or others nearby in Virginia where coal also hasn’t been mined for years. That’s because in early 2014, state mining regulators entered into a compliance agreement with the Justices to force them to reclaim the site.

Hepler, with Appalachian Voices, said that agreement has not resulted in much actual reclamation. The Virginia Department of Mines, Minerals and Energy has amended the compliance agreement multiple times.

“It’s looked like this for as long as I’ve been coming up here,” he said, pointing to the same broken-down bulldozer that has been there for years.

Tarah Kesterson, a spokesperson with the Virginia DMME, said the agency is pushing the Justices to clean up the site and is actively monitoring the situation as well as conducting inspections.

“We are doing everything within our enforcement authority to ensure that this gets done,” she said.

In a statement, a spokesperson for the Justice companies defended the reclamation work and said idling permits is a standard practice across the industry.

But as the nation shifts away from coal toward more economic options for power generation, such as natural gas and renewable energy, some fear the use of mine idling can be used as a stepping stone to abandon mines, passing the responsibility for cleanup to the government and taxpayers.

Idle mines, especially those left untouched for years at a time, can negatively affect the economy, health, and environment of nearby communities.

“When mines become inactive or idle, they starve a local community, and they deprive the community of the coal mining jobs and other related jobs,” said Joe Pizarchik, former head of the U.S. Department of the Interior’s Office of Surface Mining Reclamation and Enforcement, the federal agency in charge of regulating surface coal mines, during the Obama administration.

When mines enter temporary cessation employment plummets. CPI’s analysis found coal operations that have been idled for at least three years had 85 percent fewer full-time employees after switching into idle status than they did a year before.

“It also puts that land in a totally non-productive state,” Pizarchik said. “It’s not making money on anything for anybody for the community, and it can be a potential pollution source.”

In addition to being unsightly, there are health and safety risks associated with leaving mines unreclaimed, said Emily Bernhardt an ecosystem ecologist and biogeochemist and professor at Duke University’s Nicholas School of the Environment. Mines left idled can expose residents to coal and silica dust. They can also pose a risk for landslides and flooding. During surface coal mining, operators pile tons of rock and liquid behind earthen dams. When left idle, those impoundments face a greater likelihood of failing.

“You can’t actually make any improvements when you’re just sort of on hold,” Bernhardt said.

Federal regulators have made two attempts since the 1990s to reform the way temporary cessation is used, according to public records obtained by CPI. Both have stalled. That’s despite a 2010 survey of state regulators that showed most states believed there should be limits on how long mines could be idled.

Federal law only requires that mining companies notify regulators when a permit will be in temporary cessation longer than 30 days.

State regulators can reject applications to change mines to an idled status if they find noncompliance or ongoing pollution. Kesterson with the Virginia DMME said before an operator can apply for temporary cessation, reclamation must be up to date. In Kentucky and Virginia, inspections continue while a mine is idled, and operators are fined if violations are found.

While in the past, mine operators may have used idling to pause production to allow coal prices to rebound, Pizarchik worries the nation’s shift away from coal means the chances of idled mines being cleaned up are shrinking.

“I believe it’s extremely unlikely that those mines will ever be activated again because the price of coal is never going to go up,” he said. “The demand is only going to continue to shrink.”

If operators walk away from idled mines, states could face challenges with mine reclamation depending on how coal mine bonds are regulated, and that could leave taxpayers on the hook for paying for reclamation.

In Virginia, for example, Justice mines have an estimated $200 million worth of cleanup liabilities, according to minutes from an April 2017 Coal Surface Mining Reclamation Fund Advisory Board meeting. 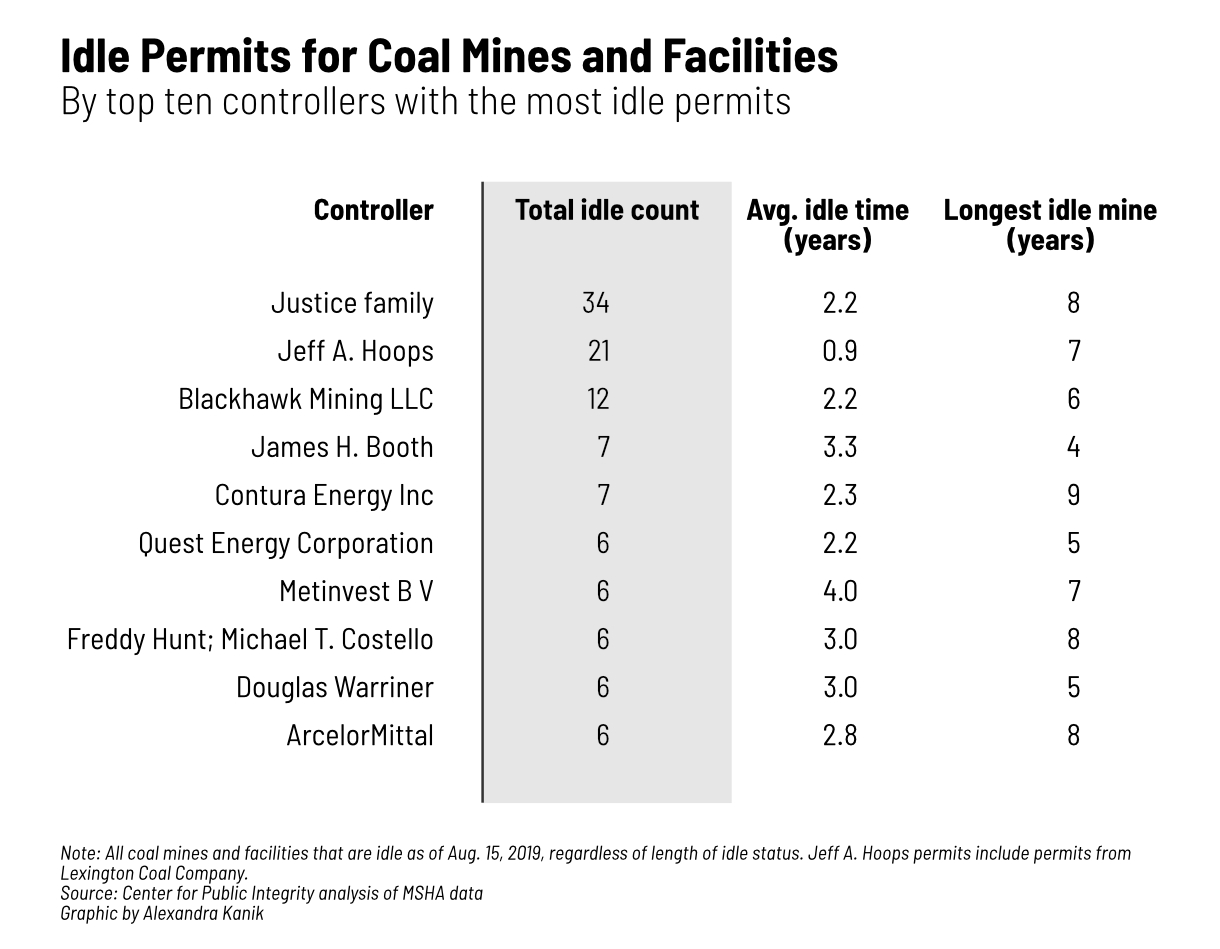 While Virginia is moving away from allowing coal operators to “self-bond” — or not put up a cash bond or buy a bond from an insurance firm if a company is deemed to be in good financial health — some A&G Coal permits remain self-bonded, Kesterson said. That means if the company were to go under, the state would get none of the money required for cleanup.

The state has in the past allowed coal companies to pay only partial bond amounts into a shared pool. The bond pool is meant to supplement cleanup for more than 150 permits, but the pool has less than $10 million cash.

“The reclamation would cost more than what we have in a pool bond,” Kesterson said of liabilities owed by A&G Coal. “So that’s why we’re trying to work with them, to get them to pay for the reclamation.” 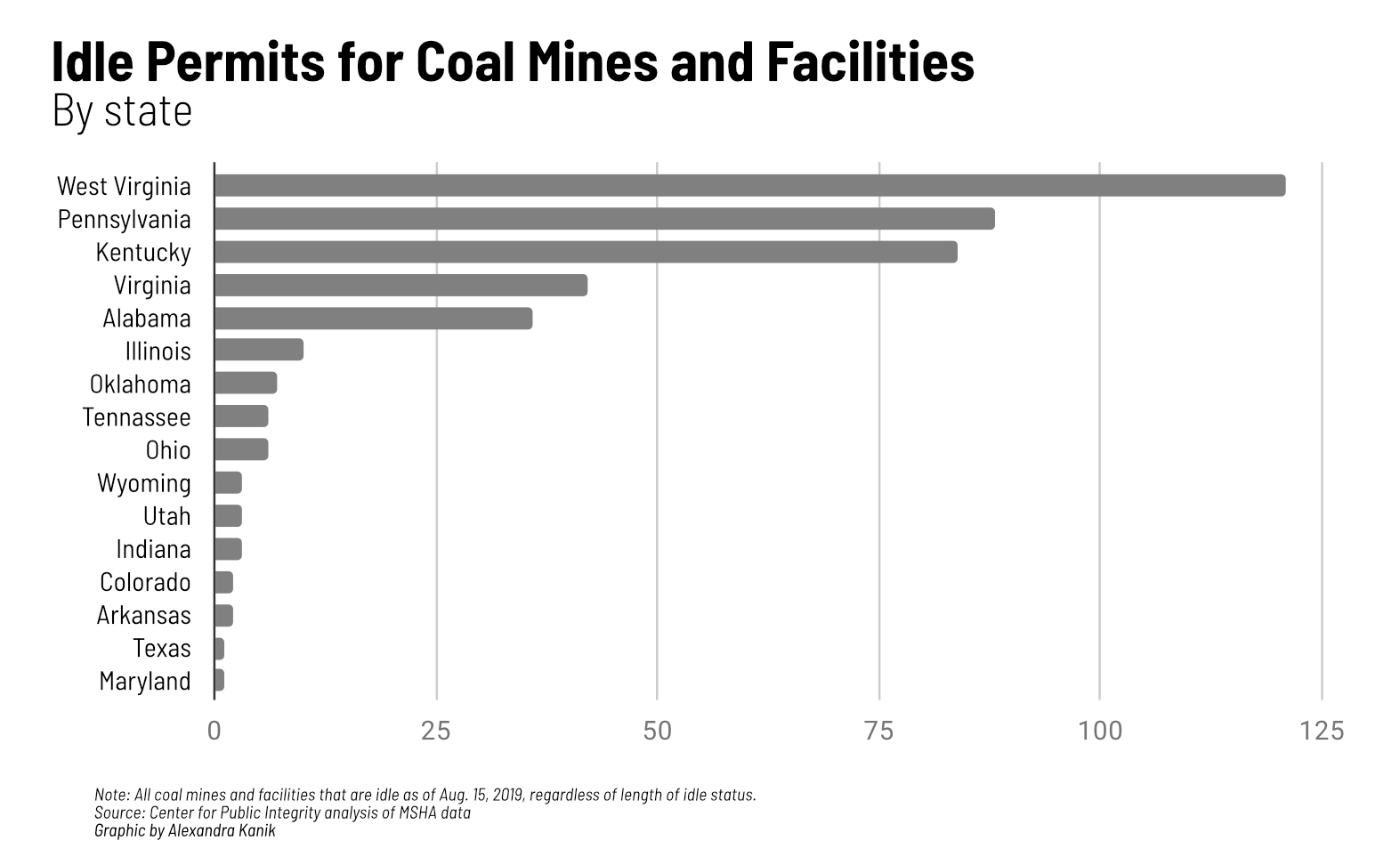 Not all states are concerned. John Mura, spokesperson for the Kentucky Energy and Environment Cabinet, said in an email that only 10 percent of Kentucky’s coal mines, or 150 permits, are in temporary cessation.

CPI’s analysis examined federal MSHA data on idled mining permits and is likely an undercount of idled mines because state and federal data are incomplete and often not comparable.

Mura said that following an order in 2011 by OSMRE to reform the state bonding program, base bond amounts have increased by about 60 percent.

“Kentucky has made great strides to ensure that reclamation bonds are adequate to complete reclamation in the event of bond forfeiture,” he said.

As the industry contracts, more bankruptcies are likely, which can open the door for companies to walk away from mines where buyers can’t be found.

That’s one concern currently playing out with the Blackjewel LLC bankruptcy, which has left more than 1,000 miners in Kentucky, Virginia, and West Virginia without their last paychecks.

CPI’s analysis found Blackjewel and other subsidiaries owned by former CEO Jeff Hoops had 21 coal mines and related facilities temporarily idled as of mid-August, according to Mine Safety and Health Administration data, and seven of those had been paused for at least three years. Many of those mines have not been purchased since Blackjewel’s bankruptcy.

At least 16 additional operations owned by other companies in bankruptcy sit in idle status, all of them in Central Appalachia, according to federal data. 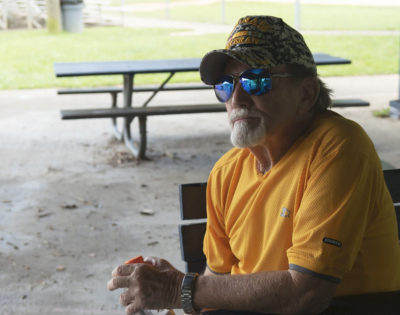 Bush lives below two Justice mines — one that is active and Looney Ridge. Sitting under a covered gazebo at a park in the town of Appalachia, Virginia, where he has lived almost his whole life, Bush said he sees the environmental toll unreclaimed mines can have on the environment.

“There’s a little stream that’s pretty much filled up with silt,” he said. “Nothing can live in it. I mean, there’s nothing, I don’t think.”

The 70-year-old Vietnam veteran is soft-spoken and sports a pair of reflective aviator glasses.

Bush wants to see this region rebound as the coal industry declines, but he struggles to see how that can happen with idled mines marking the landscape.

“If they’re not actively employing people, or actively working the site, they should be forced to do their reclamation work,” he says.