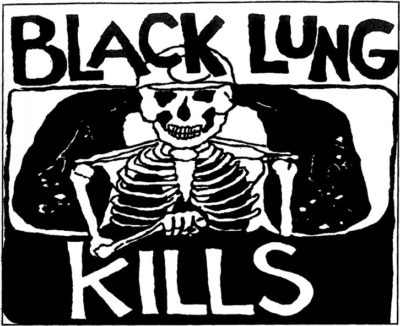 When Blackjewel Energy crashed into bankruptcy this summer, the case gained notoriety for the company’s affronts to working miners, but its impact on the imperiled black lung benefit fund is also troublesome.

According to court documents filed in July, Blackjewel failed to pay $9.7 million in taxes to a federal fund that provides healthcare and disability benefits to miners with black lung whose employers have gone bankrupt.

To be clear: Blackjewel’s workers cannot depend on Blackjewel to provide black lung benefits as the company has gone bankrupt, and Blackjewel has not paid nearly $10 million in taxes to a fund that provides a safety net for workers in exactly that situation.

The bankruptcy court had not scheduled a motion to resolve this and other outstanding tax debts as of press time in late September.

Under the Black Lung Benefits Act of 1973, any coal company found by the U.S. Department of Labor to be the “responsible operator” for a given miner’s black lung affliction is required to provide healthcare and disability benefits for that miner. A 1977 law requires that companies pay a small tax on each ton of coal mined to maintain the Black Lung Disability Trust Fund — this is the tax that Blackjewel has failed to pay. Companies were historically taxed $1.10 per ton for coal mined underground, and $0.55 per ton for surface-mined coal. On Jan. 1, 2019, that rate was cut in half. The trust fund is already about $4.2 billion in debt to the general treasury, and the federal government projects that debt will now exceed $15 billion by 2050.

Blackjewel’s failure to honor commitments to miners with black lung is not unique.

Patriot Coal was formed in 2007 and acquired numerous permits from Peabody Energy and Arch Coal that carried substantial obligations for black lung benefits, retiree healthcare and pensions. When Patriot filed for bankruptcy in 2015, it left more than $1 million in miners’ benefits hanging in the balance.

Ultimately, the Department of Labor compelled Arch and Peabody to resume payments to black lung beneficiaries they had attempted to shove off onto Patriot, but who had never actually worked at a Patriot mine. In an attempt to continue dodging obligations to employees suffering from the fatal disease, Arch Coal unsuccessfully sued the DOL in federal court.

And earlier this year, Westmoreland Coal was granted permission by a Texas bankruptcy court to outright default on $21.8 million in payments owed to black lung beneficiaries. These payments have now been added to the already-strained Black Lung Disability Trust Fund.

It appears that this ongoing barrage of bankruptcies will continue to jeopardize the payment of black lung benefits directly by coal companies, and rapidly push the federal Black Lung Disability Trust Fund further into debt.

Read about how the Black Lung Association is responding.