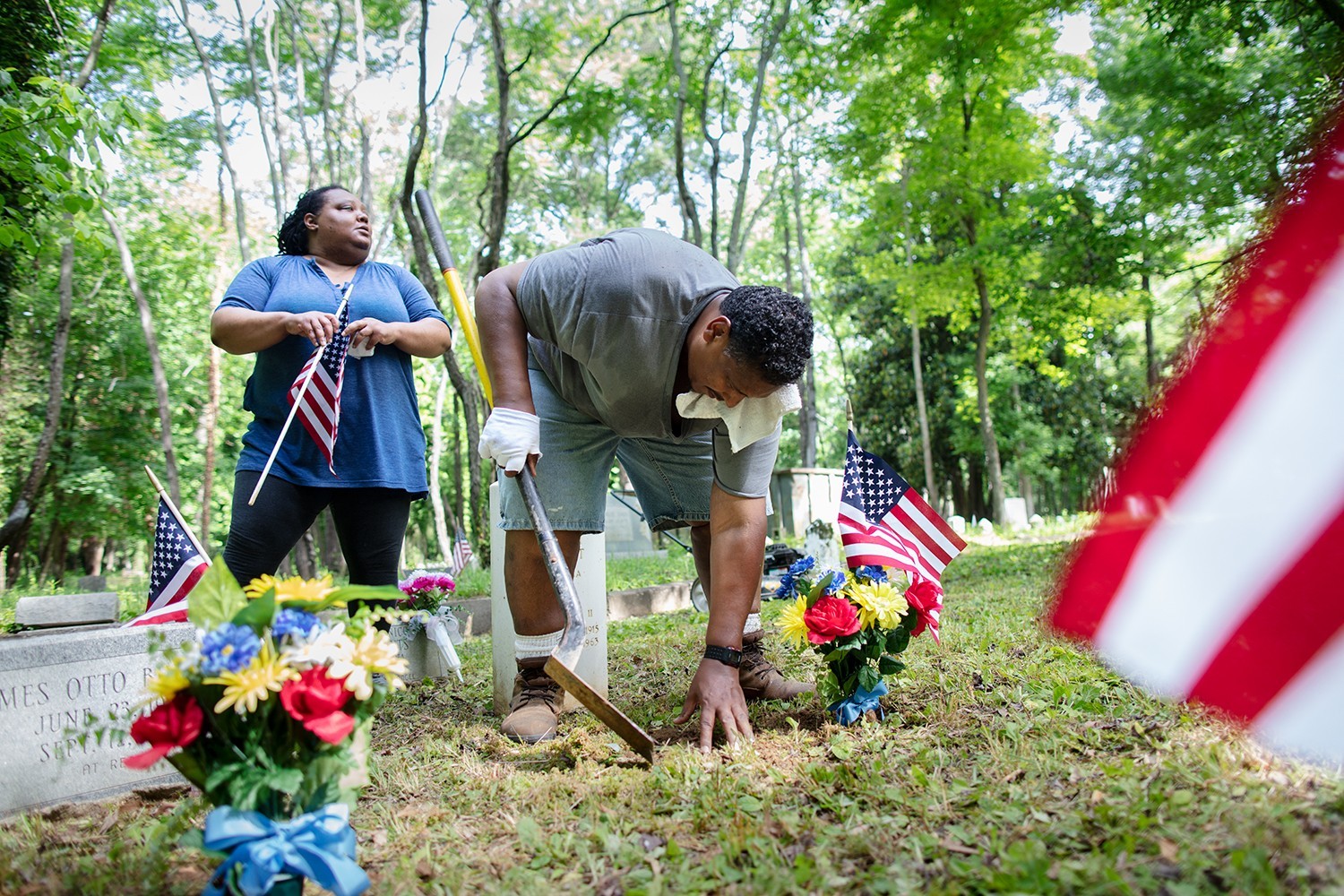 At the East End Cemetery near Richmond, Va., members of the Knight family tend to the family plot on Memorial Day in 2018. Photo by Brian Palmer/BrianPalmer.photos

For decades, the graves of more than 160 African-Americans behind a residence hall at Appalachian State University in Boone, N.C., went largely unnoticed in a nearly empty field. Several former slaves and military service members number in their ranks.

Then, in 2014, the Junaluska Heritage Association, a local group that works to preserve the area’s African-American heritage, asked the town to preserve the historic cemetery.

At the time, the graves were part of the segregated Jordan Councill Cemetery, named for the man who donated the parcel to private landowners — and who owned the most slaves in the county at one point. While the black section of the cemetery consisted of a scant few headstones and nothing else, the white section was completely fenced off, had a large iron gate and was managed by the town.

“The cemetery is adjacent to Appalachian State University and students and others have been observed sunbathing on the property, using the field as a place for pet dogs to relieve themselves, and as a burial ground for pets,” wrote Roberta Jackson with the Junaluska Heritage Association when requesting assistance from the town in 2014, according to High Country Press. “Tombstones have been moved, removed or toppled in the past.” 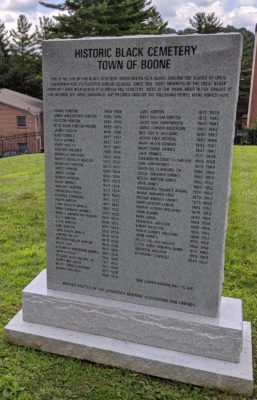 A marker with the names of those known to be buried in the Town of Boone Cemetery. Photo by Kevin Ridder

Once the group brought this to the attention of Boone officials, the town took over management of the full cemetery, tore down the fence between the two sections and changed the name to the Town of Boone Cemetery.

In 2017, the town installed a stone marker with the names of 65 people known to be buried there, and has since put a fence around the entire cemetery.

Graveyards across the region have fallen into disrepair and obscurity. Since cemeteries are by their very nature exposed to the elements, keeping them well-maintained is a difficult and often costly task. To rectify this, communities across the region are coming together to document and preserve these historic sites before they are lost to time.

And in February, U.S. Rep. A. Donald McEachin (D-VA) introduced the African American Burial Grounds Network Act, which awaits decision in committee.The bill would create a voluntary national network of historic African-American cemeteries under the National Park Service and provide support and grants to aid with documentation and restoration.

In the South, old African-American cemeteries — especially those used before 1900 — often suffer more than Anglo cemeteries from the same time period, according to Brian Palmer, former president of Richmond, Va., preservation group Friends of East End Cemetery. The East End Cemetery, established in 1897, was almost entirely overgrown and in a state of disrepair before cleanup efforts started in 2013.

Palmer says that in Virginia, state laws have mandated funding for the maintenance of Confederate soldier cemeteries since at least 1902.

“From 1902 to around 2018, these Confederate cemeteries have gotten between $9 and $10 million [in 2018 dollars] for maintenance,” says Palmer. “Right away you’ll see that certain cemeteries are valued and funded, and other cemeteries aren’t.” 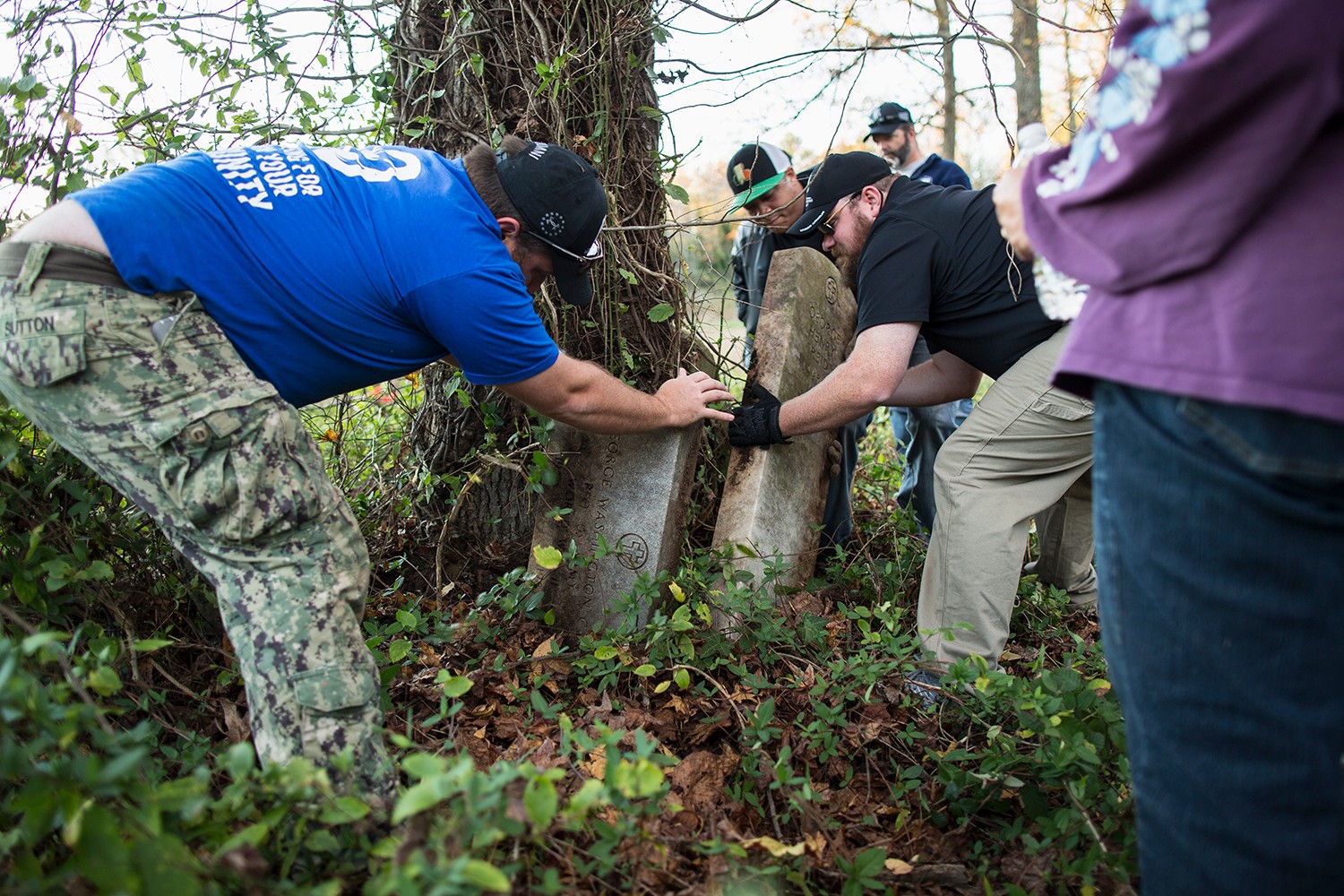 Members of Wounded Warriors pull several veterans’ headstones from a tangle of vines at the Evergreen Cemetery near Richmond, Va. Photo by Brian Palmer/BrianPalmer.photos

In addition to the decades of funding disparity, Palmer states that the “Great Migration” of African-Americans out of the rural South coupled with desegregation led to people of color leaving these historic cemeteries behind in favor of areas with more opportunity.


“You can’t simply reclaim a physical space that has been effectively destroyed by Jim Crow … because it’s been devalued in so many different ways,” says Palmer. “You have to recover the history in order to reinvest the value in that place.”

In 2017, then-Virginia Gov. Terry McAuliffe allocated approximately $34,000 to the East End Cemetery and neighboring Evergreen Cemetery. Then, in early 2019, Virginia passed a law to give funds to 19 historic African-American cemeteries. However, Palmer states that the degree to which this has helped East End and Evergreen is questionable.

A Richmond judge awarded ownership of East End to the Enrichmond Foundation, a nonprofit community organization — meaning Enrichmond got the state funds plus a separate $400,000 grant. Palmer states they were led to believe that his group would have a partnership role, and that they had spent six years conducting volunteer cleanups and connecting with descendants.

Instead, members of Friends of East End and other stakeholders serve on a 25-person advisory group Enrichmond created to provide input for the eventual preservation plan. Enrichmond has held community meetings regarding the cemetery’s restoration, which is scheduled to start in 2020.

In contrast, Palmer says the best model he’s seen for historic African-American cemetery preservation is in nearby Charlottesville, Va., because the city involves the volunteer community group Preservers of the Daughters of Zion Cemetery in decisions.

Established in 1873, the Daughters of Zion Cemetery in Charlottesville carries the name of the charitable society for African-American women who founded it. The group created the cemetery as an alternative to the segregated Oakwood Cemetery directly across the street.

“Over time it became overgrown, some of the family members moved away or died out,” says Preservers of the Daughters of Zion Cemetery co-founder Edwina St. Rose, who has relatives buried in the graveyard.

The original organization phased out in the 20th century, and the city took up maintenance in the early 1970s. While the city did basic upkeep such as mowing, St. Rose states that the cemetery was in bad shape when she formed the new volunteer group in 2015. There were several broken or leaning grave markers, and several trees were in need of care.

“There’s a lot of history in that cemetery, people who helped build the city of Charlottesville,” says St. Rose. “We wanted to make sure we didn’t lose that history.”

So in 2016, the group successfully petitioned the city to allocate $80,000 for restoration of the cemetery. That money has so far been used to install a fence, restore markers and conduct ground-penetrating radar to locate burial sites on the recommendation of the community organization.

“We’re trying to get the local family members involved with the cemetery,” says St. Rose. “Hopefully they will continue with the upkeep.”

What started as a small burial plot in 1873 in Knoxville, Tenn., has grown into three predominantly African-American cemeteries with at least 15,000 grave sites total. The people interred in the Crestview, Longview and Southern Chain cemeteries consist of teachers, mechanics, shopkeepers, clergymen, politicians and more.

After caretakers who kept up the cemeteries for decades passed, dishonest owners misused funds and the area deteriorated, according to historical organization Knox Heritage. By 1977, the cemeteries were completely overgrown — some families even moved their loved ones into more well-kept burial grounds.

Finally, in 1993, the state took over the graveyards and gave them to the West View Community Action Group, which holds frequent cleanups of those and other area cemeteries. Ellen Adcock with West View states that they could not handle cemetery upkeep alone.

“It takes not only concerned citizens, but it takes law enforcement, it takes historic societies,” she says. “You need gravel for roads, dirt for graves that have caved in, and to get someone who works at a local cemetery to talk to workers about how important it is for them to not disturb the graves.”

According to Adcock, it’s not just the African-American cemeteries in West View that suffer; illegal dumping, vegetative overgrowth, vandalism and more are all too prevalent at any of the community’s historic graveyards. She fears that modern-day cemeteries may meet the same fate as the historical ones with few caretakers.

“Perpetual care gets more costly as the years go on and there’s less and less family,” says Adcock.

Maintaining the oldest cemeteries presents its own set of problems.

“Over time, some of the caskets start to deteriorate,” says Adcock. “I have fallen in up to my knees in graves before.”

Even so, Adcock states that it’s rewarding to discover a gravestone and connect people with their relatives.

“We’ve literally had relatives come back in wheelchairs looking for their brother, and you will see the younger family members carrying them in the wheelchair out into the overgrown cemetery,” says Adcock.

She describes cemetery preservation as a constant battle, both today and for the next generation.

“What we need to leave them, though, is the inspiration to do it — because I think it is a measure of how kind a community is,” says Adcock.

Under a blanket of kudzu in a north Chattanooga, Tenn., neighborhood, headstones dating back to the 1880s dot the hillside. Some belong to African-American Civil War soldiers. If not for a recently erected sign, most passersby would probably never know that the Beck Knob Cemetery was there. 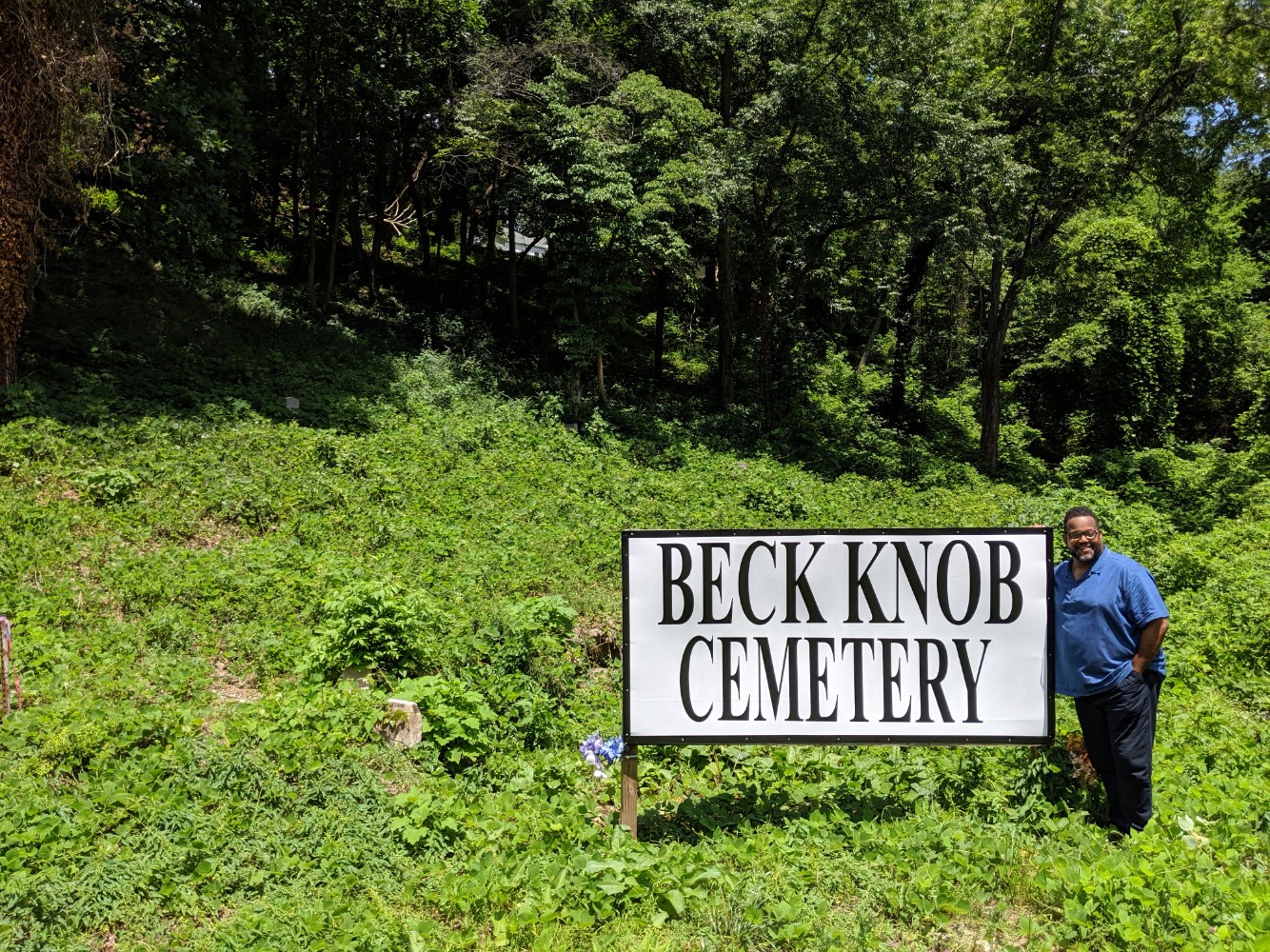 James McKissic standing in the Beck Knob Cemetery in Chattanooga, Tenn., roughly a month after volunteers cleared litter and vegetation from the site. Photo by Kevin Ridder.

For decades, members of the 136-year-old Hurst United Methodist Church maintained Beck Knob. But after the caretaker passed away around 2000 with no one to take their place, the cemetery fell into disrepair. Then, in the mid-2010s, a construction company surveying the land for a future housing development stumbled upon the overgrown cemetery.

After this, a community-driven effort to revitalize the graveyard sprung up led by church members including Gary James, who has taken on the role of Beck Knob caretaker. James grew up helping one of the previous caretakers maintain the cemetery, and now hopes to get the cemetery on the state and national historic registers. Even though Beck Knob’s location was never totally lost, restoration will still be costly.

“When we started restoration a few years ago, I think we kind of had it in our minds that we’d clean it off, it’d be dressed up and we’d just have to fix a few headstones — but there’s a lot more to it,” says James. The work requires identifying burial locations, restoring headstones, pouring fill dirt in sunken graves and more.

To help with restoration efforts, James McKissic — then Chattanooga’s director of Multicultural Affairs — set up the city African-American Cemetery Preservation Fund to supplement volunteer efforts at cemeteries including Beck Knob. The fund supports endeavors like controlling vegetation, landscaping and providing refreshments and a portable toilet for volunteer cleanup days, which happen several times a year.

“Each time we have a cleanup, we’ve had as many as 80 people,” says cemetery caretaker James. “The community is receptive and wants to participate in the restoration of the cemetery.”

While the cleanups help, fighting the creeping kudzu is a constant struggle. Standing next to a cluster of headstones that are buried under the invasive vine, McKissic says that he feels like they are “starting from scratch” each time. 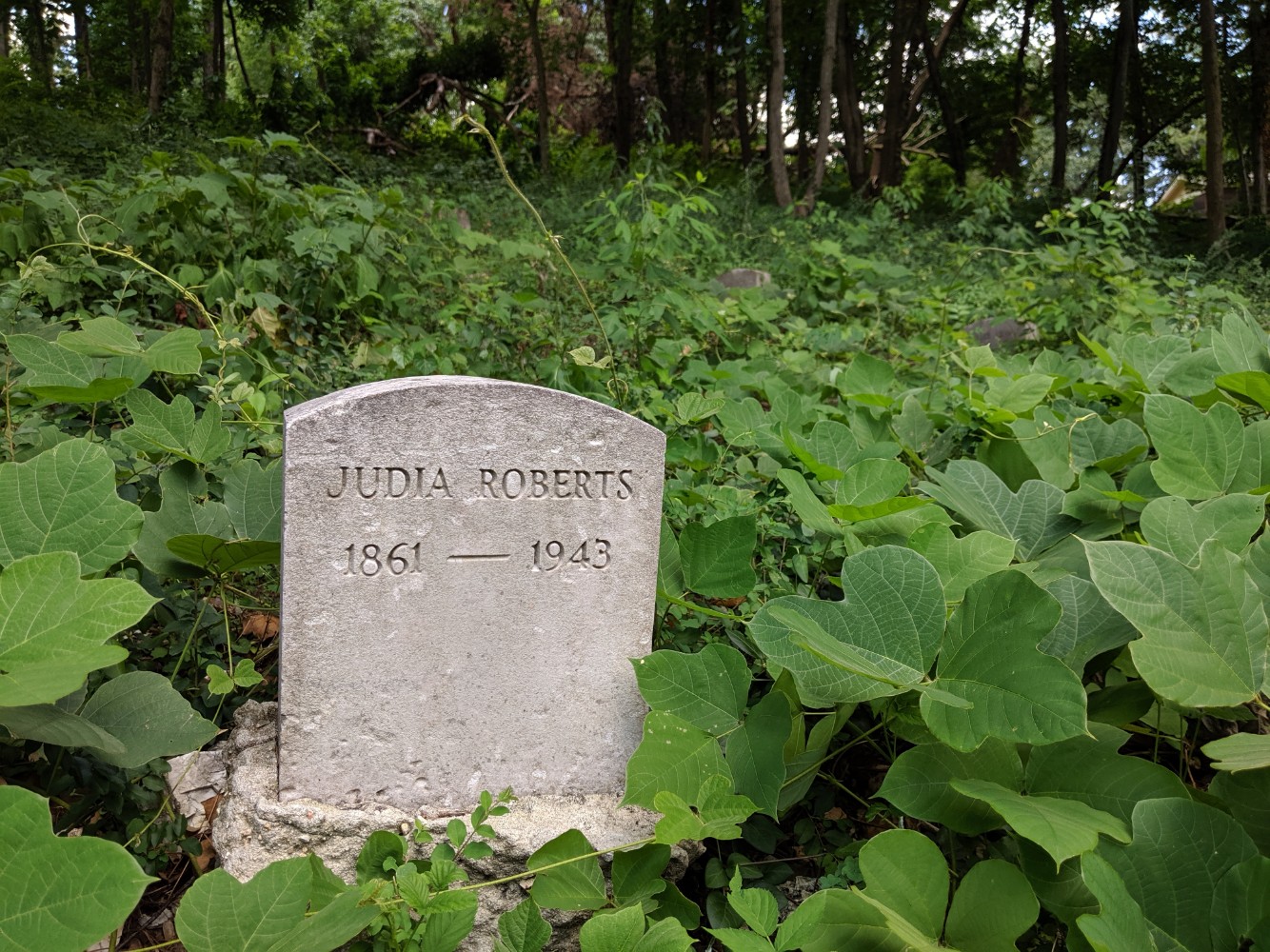 It doesn’t take long for kudzu to overtake the Beck Knob cemetery. This photo was taken roughly a month after volunteers cleared away vegetation. Photo by Kevin Ridder

Gary James states that the community is seeking help from the Chicora Foundation, a nonprofit historic preservation organization. With their assistance, James hopes to put together a work plan to clean up and restore the cemetery.

“We’re expecting to have the total cemetery floor cleaned off of vegetation, and in three to five years to bring this thing to where we have the graves restored and a wrought iron fence put around the entire cemetery,” he says.

To James McKissic, one of the most important parts is getting younger generations involved in caring for these historic places.

“You can have all the money in the world,” he says, “but if you don’t have anyone to organize and get the efforts together to take care of them, then it’s still not going to be successful.”

Related Story: Ancestors: Honoring the Past Through Work in Black Cemeteries