Ancestors: Honoring the Past Through Work in Black Cemeteries 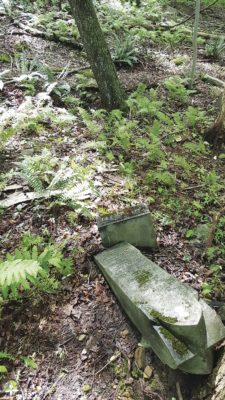 Ancestors. That’s where it all started for me. As a Black American, that is usually a question mark. We can only go so far back until we are no longer human but chattel, property to be counted along with the horses and cattle. Contrary to what many would like to believe, “so far back” really isn’t far back at all. I needed more. I needed to be connected to where I come from. Where I come from happens to be right where I am, in Wise County, Va.

When I talk to people in the grocery store or wherever I may be, I often get asked where I’m from or, “Ye’ain’t from ‘round here are ya?”

I don’t have the typical Appalachian twang to my voice. But yes, I am from around here and so are my parents and their parents and at least one set of great-grandparents. I can trace my mother’s side to a Virginia coal camp called Stonega, the “colored” section. My mother’s mother, Adeline, was the only grandparent living when I was born. She died when I was a baby. My mother and her siblings told me plenty of stories about their parents and what they could remember of their grandparents.

My father’s side is a different story. Both of his parents died before he reached the age of 10. I don’t know where my paternal grandmother is buried. This is particularly significant to me because I was named after her: Sparkle. And I am Terran Sparkle.

When I was a child, my mother’s sister lived in a small single-wide trailer in the South Side neighborhood of Norton, Va. The trailer sat alone on a hillside with a wooded area directly across the one-lane road. The tree line started at the bottom of the hill where the road began and it extended far beyond my aunt’s trailer where the road ended. My parents told me that there was a graveyard hidden behind the tree line.

At the time, being a child of six or seven years old, I imagined all the horrors that were there; snakes, bears, wolves, zombies, all the terrors that my little mind could think of. Also, I could not understand how a graveyard was in the woods. To me, a graveyard was a cleared lot that was nicely manicured with fancy headstones and flowers.

As I got older, my parents explained that I had many family members buried there, including an uncle, great-grandfather and grandfather on my mother’s side, and my dad’s mother, Sparkle. I cannot recall exactly when, but I was told that her grave was moved due to the construction of a highway coming through South Side. This was something that my uncle, my father’s older brother, handled, so neither my father nor I know exactly what had happened.

I can remember being a child and going with my father to another graveyard where he thought his mother had been moved. The disappointment on his face when he was told that she wasn’t there has always stuck with me.

I moved away from the region at nine years old and came back as a young adult 14 years later. Finding my grandmother’s grave was on my mind. Equipped with more knowledge and Ancestry.com, I set out on my journey.

“I’m gonna clear off that graveyard.”

That’s what I told my mother. She thought I was weird, crazy or both. If my father had any negative feelings about it, he didn’t vocalize them. A few weeks later when I asked, he took me to the graveyard. I’m sure by this time no one had set foot in there for decades. As an adult, it wasn’t as bad as I had imagined.

Most of the trees only lined the perimeter. It wasn’t overrun with snakes and zombies, but it definitely felt like we had entered a world that had been long forgotten. It felt sacred. I felt connected. I took a lot of photos and we cleaned off graves.

My mom still thought the idea was wild. She told a few friends of our escapade and as people, both local and those who had moved away, found out that my father and I had gone there, they wanted to know more. They had questions. “What does it look like?” “Whose grave did you see?” “Did you run into any snakes?”

I wanted to know more, too. I went digging — a little graveyard humor. After what seemed like a wild goose chase through records at city hall, the health department and the county courthouse, I still couldn’t find an owner for the graveyard itself. However, I was able to contact the company that owns all of the surrounding land. Let’s just say that they didn’t want to have anything to do with “that colored people’s graveyard” and leave it at that.

I also discovered that the graveyard had a name, Chestnut Grove, which is the same name as a church in the South Side neighborhood. More importantly, I found records indicating that my grandmother had been moved to Oakview Cemetery in neighboring Big Stone Gap, Va., except she wasn’t there either.

Let’s fast-forward a few years. I was still doing research on my family, but not so much on my grandmother. I met a woman named Joanne Golden Hill. She, too, was researching her family history, including graveyards. Joanne informed me that relocated graves often are not relocated at all. Some dirt may be moved but many times the caskets actually aren’t exhumed. Around the same time that I met Joanne, maybe even the same day, I received my father’s Ancestry DNA results. This new information motivated me to pick up where I left off.

One day while at work, I overheard a conversation about an abandoned black graveyard in a neighboring county. I joined the conversation with my knowledge of Chestnut Grove and a few other local black cemeteries. With that conversation, William Isom of East Tennessee PBS, Marley Green of Appalshop, Amy Clark Spain of University of Virginia – Wise, Willie Dodson of Appalachian Voices, which publishes this newspaper, and myself began looking into black and slave graveyards around the region. There is a black cemetery in Haysi, Va., that Willie registered with the Virginia Department of Historic Resources. And at a slave graveyard found on Amy’s family property in Jonesville, Va., ground-penetrating radar has been used to identify graves. William documented that work for PBS and has researched several black cemeteries in East Tennessee. Of course, I focused my energy on Chestnut Grove Cemetery.

Since then with the help of my family and some friends, we have had several clean-up sessions. We have removed overgrowth, cleaned off graves and turned headstones upright. Most importantly, I have had the privilege of visiting and placing flowers on some of the graves of my ancestors.

One day, after taking particular care to clear off a grave, I noticed that it belonged to Buford Noaks, my uncle. Buford was tragically killed years before I was born. I photographed the headstone and shared it with my family. Many family members commented and told me their personal stories about him. Older cousins expressed that he was their favorite uncle and wished I could have met him. Some cried and hugged just at the memory of the forgotten grave. My family’s reaction confirmed for me the importance of the work. 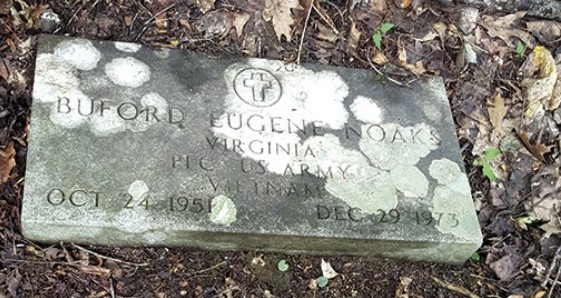 The grave marker of the author’s uncle. Photo by Terran Sparkle Young

The graveyard sits at the foot of a mountain backing on to national forest. From the top of the last row of graves looking down, it is easy to see the settling of the land into the sunken graves.


There appears to be more than an acre that holds nearly 200 graves. The end goal is to have the graveyard registered, completely cleaned up and to begin to identify some of the unmarked graves. I recently found out that the city of Norton and Chestnut Grove Baptist Church have also shown interest in working together to preserve the graveyard. I look forward to partnering with them in this endeavor.

So now, we sit at the crossroads of heritage and race, ancestral voice and narrative. There is a lack of representation of black people in Central Appalachia. While the stereotype of the hillbilly is harmful to Appalachians, the erasure of black Appalachians is equally as harmful. It is important for Appalachians to control the narrative of the region to prevent some of the shaming that happens when outsiders tell our story.

The invisibility of black people in the region is silencing. We are absorbed into a culture that is not entirely ours and given the choice to either get lost within it or be “othered” because of our differences. To be a black person in the region is to be invisible or to be seen as foreign because often the narrative given does not allow us to exist as both Appalachian and black simultaneously.

It is my hope that this project uncovers our deep history in the region and gives a voice to the ancestors that have been silenced and ultimately forgotten. Representation matters.