A Tale of Orchards Past 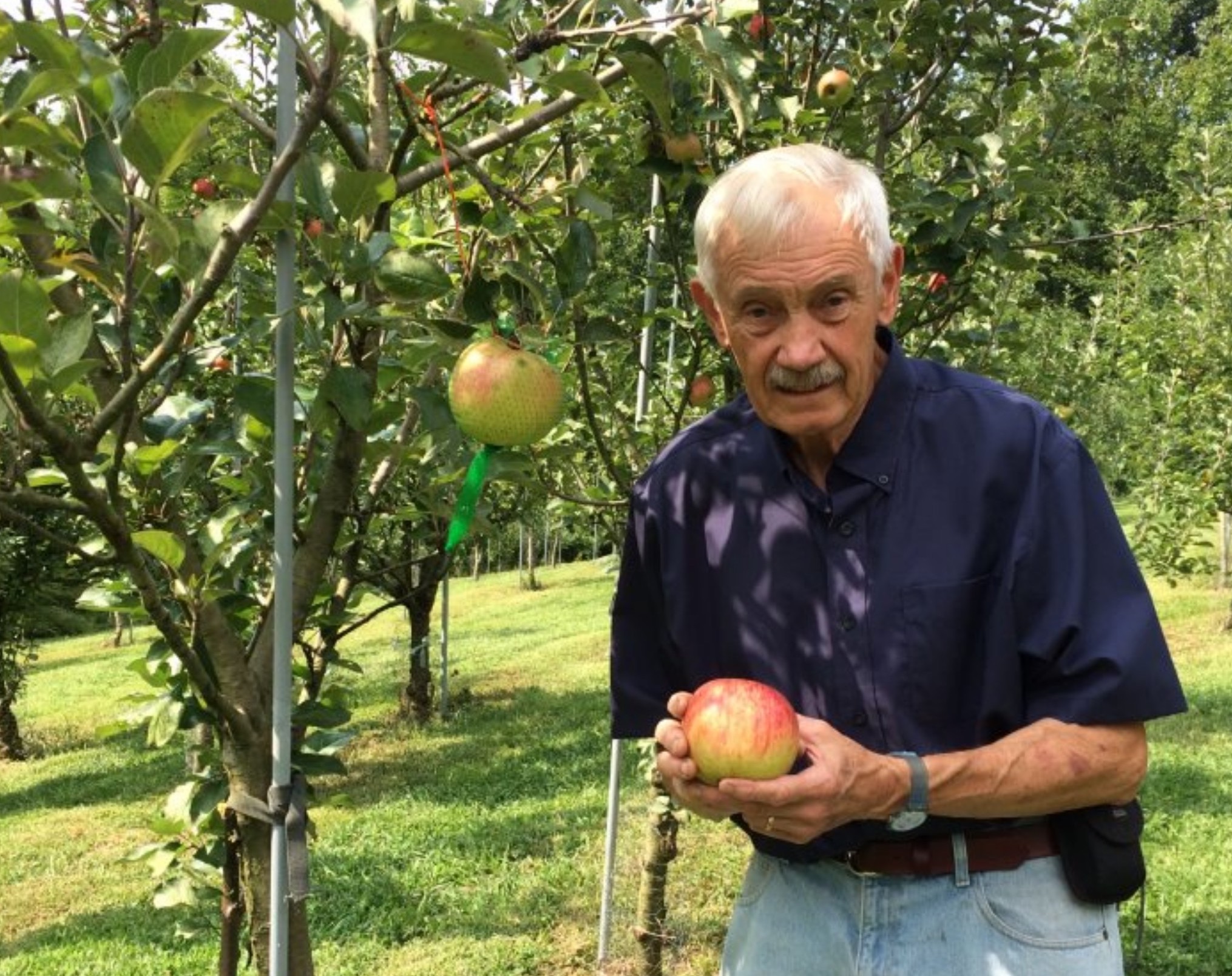 The year is 2001 and a tip has heirloom apple hunter extraordinaire Tom Brown driving 300 miles to Northeast Georgia to look for an apple tree rumored to hold grafts of a variety that has otherwise all but vanished, the Fort’s Prize. Around 7 a.m. he stops at a country store in the tiny community of Otto along the North Carolina border.

“There were three elderly gentlemen in there and, as usual, I asked if they knew of any old apple trees in the area or could remember the names of any varieties that were around when they were kids,” says Brown, 77, a native of Clemmons, N.C. An octogenarian in overalls recalled rare gems like Yates, Cannon, Sheepnose Sweet, Tom and White June. To find trees, he advised Brown to visit neighboring amateur historian and orchardist Johnny Crawford.

Brown spent the day scouring rural Rabun County for Fort’s Prize — sadly, to no avail. He went to see Crawford that evening. The man was in his mid-60s and had a home orchard boasting old English staples like Pippin, Pearmain and Nonsuch, but nothing particularly rare. However, he said he would gladly introduce Brown to local elders familiar with old trees and lost orchards. 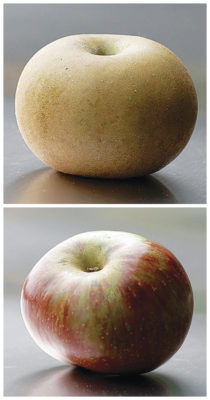 Brown returned about a week later. Crawford’s guidance led him to a rural backroad inhabited mostly by the Speed family. There, Brown discovered a treasure-trove of heirlooms. One home had Bart and Royal Lemon. Another, Neverfail, Hog and Candy Stripe. Still another, Black Winesap and Rabun Bald. Brown took clippings of rare varieties that were no longer stocked in nurseries or orchards.

“In the days before grocery stores, it was a point of pride to have apples that were different from [those of] your family and neighbors,” says Brown, explaining the diversity. “On one hand, it was bragging rights over who had what. On the other, it brought access to a wider variety of flavors and usages.”

For 19th century Appalachian families, a well-stocked orchard was essential. There were apples for every application — from drying, frying, fresh eating, baking, making brandy, hard and sweet cider, vinegar, feeding livestock and so on. The diversity of their shape, size, color, texture, taste and time of ripening was astounding. In 1905, a U.S. Department of Agriculture report cataloged more than 14,000 varieties growing in East Coast orchards; more than 7,000 were cultivated in Virginia’s Shenandoah Valley alone. But the transition toward monocultures and corporate farming in the 20th century changed all that. Today’s commercial growers sell around just 90 different types of apples. By 2000, more than 11,000 American varieties were believed to have gone extinct.

So, for Brown, finding multiple old apple varieties in a single visit that he could bring back to orchards and nurseries was a huge success. But when J.P. Speed mentioned he’d heard tell of a Junaluska tree in Haywood County, Brown’s heart nearly skipped a beat. The legendary variety was more than 200 years old and had long been thought extinct. It took its name from — and was cited as the historical favorite of — an early 19th-century Cherokee Indian chief. Though some claimed the Junaluska was mythical, Brown had dug up references in multiple 19th century southern orchard catalogues. 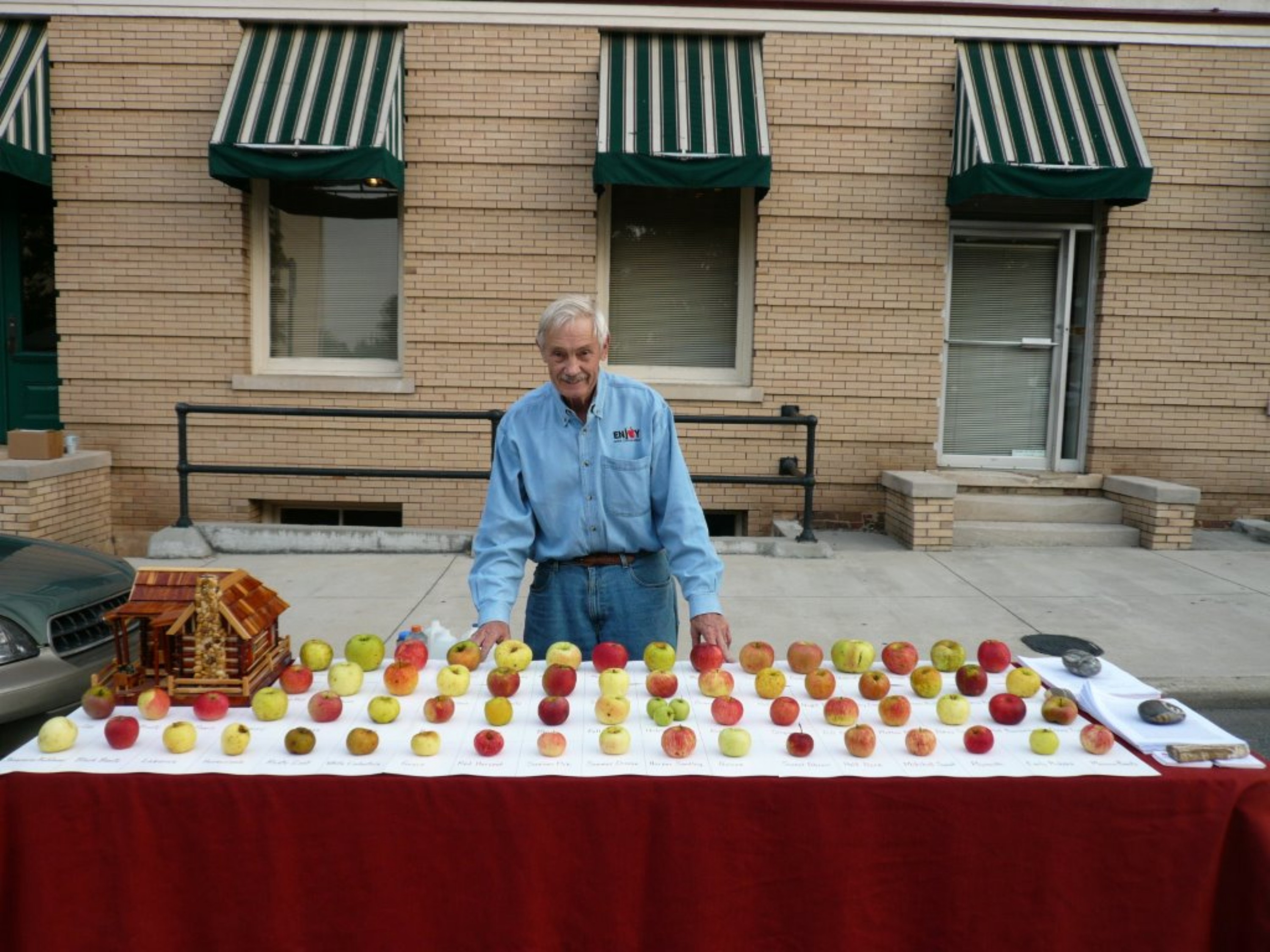 Tom Brown with his apple display at the Lincoln County Apple Festival in North Carolina.

He consulted Crawford who suggested they try properties near a pair of once-prominent, now lost Haywood County orchards dating to the 1820s. Crawford thought it likely that community members had taken and grafted clippings before the trees had been cut down nearly a century before.

“A lot of times somebody in the community has an old tree, only they don’t know what it is, much less whether or not it’s rare and on the verge of extinction,” says Brown. Trees typically date to the childhoods of homeowners’ grandparents; chances are, household knowledge of origin and usage died out with their passing. “Or it might be that somebody young has recently bought the property,” Brown continues. The extent of their knowledge “is the tree puts out apples that don’t look or taste like what you buy at a grocery store. To them, it’s probably a curio or a nuisance.”

Brown and Crawford met again and visited the mountaintop homestead of Kate Mincey about two weeks later. Then in her late 80s, Mincey directed the men to a grove of overgrown apple trees. In it they found vintage varieties like Bank, Wolf River, Sweet, Winesap and two oddities she called John Berry Keepers. The name commemorated both the farmer that had gifted her father the clippings and the apples’ prodigious keepability. With no ripe fruit on the tree, Brown asked Mincey for a verbal description. In addition to the skin having blotchy brownish patches and a slight reddish blush, the apples had compact, mostly yellow flesh, a short, stout and knobby stem, extra rich taste and ripened in late October. It was a match for old orchard records describing the Junaluska!

“Can I describe the feeling of rediscovering an apple variety that everybody, including myself, thought had vanished from the world forever?” says Brown, laughing gently. “Well, I’d say it’s… the experience is just pretty darn miraculous. Lucky for me, it’s something I’ve been fortunate enough to experience many, many times over the years.”

Indeed, Brown has spent the past two decades and counting seeking to reclaim the lost diversity of Appalachia’s heirloom apples. To date, he has recovered more than 1,000 different varieties. Taking clippings from each, he established an 800-variety heirloom orchard and nursery—and now sells upward of 1,000 trees a year. Through donating countless limbs for grafting, he has helped found another seven nonprofit heritage orchards. The net effect has been to bring long-lost apple flavors and tastes to eaters and drinkers throughout the United States.

“To know I’ve played a part in bringing these amazing trees back from the brink of destruction is incredibly special,” says Brown.

“But I have to say, the work has been, on average, more fun than hard,” Brown continues with a laugh. “I’ve gotten to see so many interesting places, meet all kinds of great people and hear more good stories than I can possibly recount. None of that would’ve happened if I hadn’t been out there looking for these apples. My only wish is that I could’ve started 20 years before I did—then I would’ve saved probably five times as many varieties.”

In 1995, Katherine Trubey purchased the 280 acres running along the Blue Ridge Parkway to prevent development. The orchard grows over 40 varieties of apples including “Lop-eared Johnson,” Stayman-Winesap and local favorite Virginia Beauty.

Trubey, her brother Bill Carson and his wife Judy Carson started the nonprofit Altapass Foundation, Inc., in 2002 as an offshoot of their commercial orchard. The foundation hosts events with folk artists, naturalists and mountain musicians. It also preserves wetlands and supports butterfly gardens full of milkweed to nourish monarchs.

Learn more at altapassorchard.org, or read the 2003 story in The Appalachian Voice at appvoices.org/2003-altapass. — By Christine Dudley

Interestingly enough, Brown’s apple quest didn’t start until he retired in the late-1990s. And it came as a surprise.

Though he had helped his parents tend and graft a few trees as a boy, his career was far from agricultural — by profession he had been a chemical engineer. His interest in heirlooms was sparked at a Salem, N.C., farmer’s market.

“There was a gentleman there that had these little baskets of apples with odd names,” says Brown. “I thought to myself, ‘Now there’s something you don’t see every day.’ So, I go up and ask him what’s the deal and he says, ‘These’re heritage apples.’ Well, I didn’t know what that was, so I asked: ‘What the heck is a heritage apple?’ I didn’t realize it at the time, but that question marked the beginning of what was to become an obsession, consuming passion, and, as I think of it now, my true life’s work.”

Needless to say, Brown’s interest was piqued. Learning the vendor had searched for and recovered two or three varieties sealed the deal. Brown quickly began researching the history of Appalachia’s orchards. The volume of lost diversity astonished and saddened him.

“These apples were important to people,” he says. “They were part of a culture that, nowadays, we’ve basically all but forgotten. … Trying to save as many of these trees as possible before they died out felt imperative.”

Brown soon returned to the market. He asked the gentleman about North Carolina varieties that were rumored to still be around but had yet to be recovered. The man mentioned the Harper’s Seedling and counties where reports occasionally surfaced.

“Within a few weeks, I’d taken out ads in local papers asking for information,” Brown confides with a laugh. Dozens of responses followed. “Nobody mentioned the Harper’s, but they told me about a lot of other varieties. So, I started paying visits and finding apples.”

Only then he had to figure out how to identify them. That led to making friends with orchardists and other experts.

“Soon enough, it was like a full-time job,” says Brown. By 2003 or 2004, he was driving more than 30,000 miles a year looking for apples. “By then I’d put up a website with photos and my contact information, and started writing an annual newsletter about the apples I was finding.”

Brown’s efforts have won him praises from more than conservation-minded orchardists. These days, foodies throughout Appalachia and points beyond are enjoying slightly livelier fall farmers markets. But Brown’s work is also impacting cidermakers: The availability of ‘new’ heirloom apple varieties is helping spark a cider revolution.

“If you’re running a cidery and you’re not offering one or two single-variety heirloom ciders, that’s a big mistake,” says Mt. Defiance Cidery co-owner and cidermaker, Marc Chretien. He likens beverages made from apples like Albemarle Pippin and Arkansas Black to wines crafted from noble grape varieties like Merlot. “The more quality varieties we have at our disposal, the more room we have to experiment,” says Chretien. Similar to craft beer, consumer interest is “driving rampant experimentation. Basically, we’re in the midst of a cider renaissance.”

As such, Brown’s apples are in high demand. And craft cidermakers appreciate his efforts.

“Tom has done more than anyone alive to help preserve the legacy of Appalachia’s heirloom apples,” says Foggy Ridge Cider founder Diane Flynt. The Dugspur, Va., cidermaker established what has often been called the first modern orchard in the South devoted to growing heirlooms for hard cider in the mid-1990s. Her work to introduce Appalachian-grown, single-variety, Old-World-style heritage ciders to the contemporary palate won her a James Beard Foundation Outstanding Wine, Spirits or Beer Professional award in 2018.

“Tom arrived at this calling in the nick of time,” Flynt continues. “The people that knew about these old apples were — and still are — fast dying out. Because of Tom’s incredible devotion, we have countless ‘new’ varieties of apples to work with. As Appalachian cidermakers, we now have the ability to craft true terroir beverages that have histories dating back centuries.”

And that, says Flynt, is no small achievement.

A Sip of Cider

Ready to see if you can tease out the tastes of different apples in your beverage? Find a cidery near you: