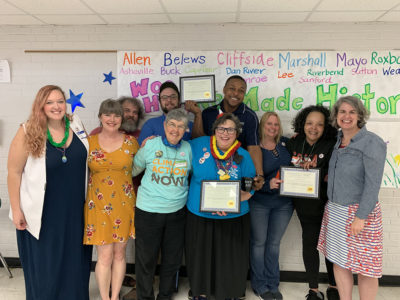 On April 1, the North Carolina Department of Environmental Quality announced that Duke Energy must fully excavate millions of tons of coal ash from six sites across the state. This was a victory for communities near the ash impoundments and environmental groups including Appalachian Voices, the publisher of this newspaper, who had advocated for coal ash excavation for years.

Like other power companies, Duke has typically dumped coal ash mixed with water into unlined, earthen pits. Pollutants have leached into groundwater at all of the utility’s North Carolina sites and have been a suspected cause of drinking water pollution in communities near six of Duke’s power plants.

After a Duke coal ash pit near Eden, N.C., burst in February 2014, more than 39,000 tons of the toxic substance spilled into the Dan River. This prompted the state legislature to pass the Coal Ash Management Act later that year to monitor the cleanup and closure of Duke’s 33 ash impoundments at 14 sites across the state.

“DEQ rigorously reviewed the proposals, and the science points us clearly to excavation as the only way to protect public health and the environment,” DEQ Secretary Michael Regan said in an April 1 press release.

On April 26, the monopoly utility appealed the state’s decision, claiming that excavation would “drastically increase” ratepayer costs. Duke has opposed moving coal ash to lined landfills due to its comparatively higher cost, instead favoring capping the open pits in place. But the cap-in-place method does not stop pollutants’ ability to seep into groundwater, especially for many of Duke’s coal ash ponds where the ash sits at or below groundwater level.

On May 3, the Southern Environmental Law Center moved to intervene in Duke’s appeal. The nonprofit law firm represents several environmental groups, including Appalachian Voices, in the case against Duke.

Duke claims that full excavation could cost as much as $10.6 billion. But Appalachian Voices’ North Carolina Field Coordinator Ridge Graham states that these numbers are grossly inflated.

“If you look at the numbers from the closure option analyses that Duke submitted to the DEQ back in January, the total cost for excavation to on-site lined landfills is $3.6 billion — and that’s with the inflated contingency of up to 25 percent tacked on, at most sites,” says Graham. “This is classic fearmongering from Duke to turn ratepayers against the communities living near coal ash.”

Regardless of the total cleanup cost, Duke could attempt to pass some or all of it on to its customers. In 2018, the state utilities commission allowed Duke to charge ratepayers $546 million to close coal ash pits, a decision that state Attorney General Josh Stein and the Sierra Club both appealed.

“This decision does not come down to a matter of cost,” says Caroline Armijo with Residents for Coal Ash Cleanup, a grassroots group near the utility’s Belews Creek waste impoundment. “It comes down to compassion and respect for the lives of the people who love this state and their homes.”

Over the years, thousands of North Carolina citizens have shared their stories, experiences and concerns about Duke’s unlined coal ash pits. There have been numerous rallies and press conferences outside of courthouses, DEQ headquarters and inside the General Assembly. These community members have also written thousands of comments, spoken at dozens of hearings and been heard on national platforms such as CNN and in the New Yorker.

Belmont, N.C., resident Amy Brown lives next to Duke’s Allen Steam Station and relied on bottled water for drinking and cooking for three years due to polluted well water. The utility paid for new water lines for Brown and other residents within a half-mile of the coal ash pit.

“Duke was never promised or guaranteed to receive a cap-in-place decision, they assumed they would get what they wanted,” Brown wrote in an email.

In 2016, Duke pushed for a bill to downgrade the risk classification of coal ash ponds from intermediate to low, as long as the monopoly utility provided a permanent clean water source to people within a half-mile of the ponds’ outer boundaries. After the bill passed, Duke connected 960 homeowners and businesses to municipal water lines while the communities near the Belews Creek, Mayo and Roxboro power plants instead received filtration systems.