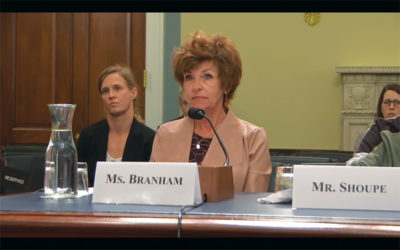 West Virginia resident Donna Branham told members of Congress about her experience living near a surface coal mine. “The dust created by blasting was so intense sometimes you could hardly see to drive,” she said. “Dust got into our houses and cars. When you blew your nose, coal soot would be on the tissue.” Public domain photo

On April 9, residents of Central Appalachia impacted by coal traveled to Washington, D.C., and testified before members of Congress about how mountaintop removal coal mining has affected their communities. The House Subcommittee on Energy and Mineral Resources held the hearing to determine this form of mining’s impact on public health and the environment.

Earlier in April, Rep. John Yarmuth (D-Ky.) introduced a bill to place a moratorium on mountaintop removal permitting until the government conducted health studies. Industry advocates labeled the bill as over-regulation. At the hearing, Rep. Yarmuth stated that no federal health study has examined mountaintop removal mining’s effect on nearby communities. He noted that the Trump administration halted one such study in 2017.

“During my job as a nurse, I would see the adverse health effects caused by irresponsible mining,” she told the committee. “Retired miners gasping for every breath, painful joints, increased cancer rates.”

Carl Shoupe, a former coal miner and a member of nonprofit grassroots community organization Kentuckians For The Commonwealth, lives in Benham, Ky. Shoupe and three other area residents are petitioning to the state to declare 10,000 acres surrounding the Kentucky towns of Benham and Lynch as unsuitable for mining.

“As we speak, a coal company is seeking a permit to strip mine the ridge behind my home,” Shoupe said during his testimony. “They plan to go up the entire valley. If that happens, it will endanger our health, safety, peace of mind, property, tourism economy, drinking water, and hope for the future.”