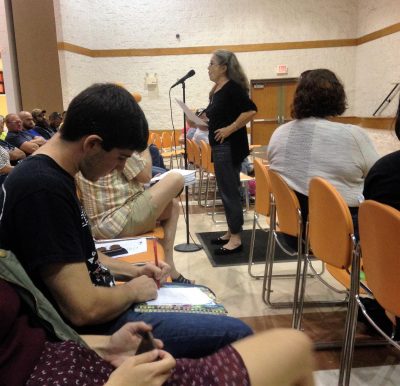 A proposed 545-acre strip mine in Ohio’s Perry State Forest is garnering local opposition. If approved, the mine would encompass 12 percent of the public forest, which is a popular spot for hiking, hunting, fishing and horseback riding.

Members of Friends of Perry State Forest, a grassroots group that formed to fight the mine, were among the more than 150 people who attended a Ohio Department of Natural Resources meeting about the mine permit this February. At the meeting, regulators acknowledged hearing from more than 1,000 concerned people, the Perry County Tribune reported.

Opponents of the permit are concerned about air pollution, noise, harm to nearby drinking water wells and property damage from blasting. They also cite the forest’s recreational and economic value.

“This area, this forest, creates a lot of revenue for this town,” Jeff Ivers, whose property is surrounded by the public forest, told WOSU Public Radio. “They just don’t see that. And they think mining is going to create more revenue? I don’t see how.”

Friends of Perry State Forest is also concerned about the financial stability and ethics of the company applying for the permit. Oxford Mining Company, a subsidiary of Westmoreland Coal, originally applied for the permit in 2017. Following Westmoreland’s October 2018 declaration of bankruptcy, Oxford sold the permit to a newly formed company, CCU Coal and Construction, which is owned by former Oxford owner Charles Ungurean. Under Ungurean’s tenure in 2014, Oxford was found to have intentionally modified water discharge reports to hide violations from state regulators.

In January, Friends of Perry State Forest filed an appeal of a Clean Water Act permit issued to the mine by the Ohio Environmental Protection Agency.