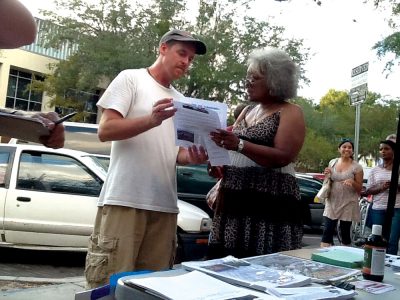 This decision followed over three-and-a-half years of activism by citizens with Gainesville Loves Mountains, a group of volunteers committed to fighting mountaintop removal in Appalachia and advancing clean energy locally.

The group held dozens of meetings with city commissioners that resulted in five public hearings and the bipartisan passage of the Mountaintop Removal City Ordinance. The policy ensures that Gainesville Regional Utilities will not purchase coal mined using mountaintop removal as long as it has bids from other types of mines that are not more than 5 percent higher than bids from mountaintop removal operators.

Since the policy’s passage in 2014, the utility has not purchased any coal mined from mountaintop removal and the city’s overall coal consumption has dropped considerably. Gainesville Loves Mountains is now advancing an Energy Conservation Ordinance aimed at reducing energy consumption and costs for rental properties in Gainesville.

According to Gainesville Loves Mountains, this ordinance would protect renters from costly utility bills out of their control and reward landlords who make energy efficiency investments in their properties, all while strengthening the local economy. — By Kennedy Kavanaugh