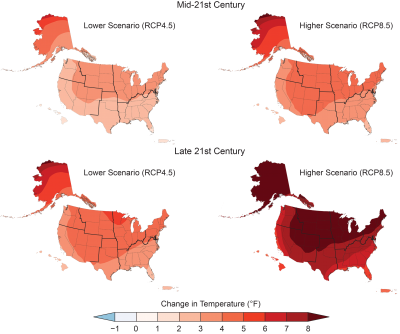 Around the world, governments and international organizations are reacting to the most recent report by the United Nations’ Intergovernmental Panel on Climate Change. American leaders are also responding to a new federal report emphasizing the risks of climate change. In Appalachia, local leaders and citizens have joined the call for action in light of the findings.


The world is already 1 degree Celsius above pre-industrial levels. The IPCC report urges leaders to stop global warming at about 1.5 C instead of the 2 C limit on warming called for by the Paris Climate Agreement.

“Climate-related risks to health, livelihoods, food security, water supply, human security and economic growth are projected to increase with global warming of 1.5 degrees Celsius,” the report states, noting that risks increase drastically with a figure of 2 C warming. At current greenhouse gas pollution levels, the Earth is projected to warm 1.5 C by 2040.

On Nov. 23, the U.S. Global Change Research Program, a collective of 13 federal agencies and more than 300 experts, released the second volume of the Fourth National Climate Assessment.

The report warns that current emissions projections would cause climate impacts that could cost the country $500 billion by the end of the century. When asked about the climate report, President Donald Trump told reporters, “I don’t believe it.”

The Appalachian Mountains face rising temperatures, a higher risk of flooding, forest fires and droughts, and an increased risk of losing habitats and biological diversity to the effects of climate change.

To prevent catastrophic warming, the IPCC report finds that coal must be reduced from 40 percent of the world’s electricity source to between 1 and 7 percent by 2050. West Virginia and Kentucky get 93 percent and 79 percent of their electricity from coal, respectively, and are the second- and fifth-highest producing coal states.

In North Carolina, Gov. Roy Cooper issued an executive order in October calling for a 40 percent energy-use reduction in government buildings by 2025 and a task force for climate change action in state cabinets.

“With historic storms lashing our state, we must combat climate change, make our state more resilient and lessen the impact of future natural disaster,” Cooper said at a press conference, referencing recent hurricanes.

Students, faculty and staff of Appalachian State University in North Carolina have held multiple meetings in response to the IPCC’s report to discuss how the school should and can respond. The university is committed to a carbon neutrality date of 2050, and many involved believe the school should make the transition sooner.

“That report was really a wake up call to us all,” says ASU Assistant Professor of Sustainable Development Jacqueline Ignatova. “Seeing packed rooms full of concerned citizens is really encouraging.”

On Nov. 2, Virginia Gov. Ralph Northam issued an executive order introducing multiple programs and standards to project sea level rise in Virginia and react to flooding, wildfires and earthquakes. He cited the IPCC report as inspiration to act.

West Virginia is developing an energy plan for 2018 to 2022. West Virginia Gov. Jim Justice, who owns a number of coal mines, has raised doubts about climate science and praised Trump’s rollback of the Obama administration’s carbon emissions rule and introduction of a less-stringent version.

The Ohio Valley Environmental Coalition, a West Virginia grassroots nonprofit organization, wrote about the IPCC report ahead of the midterm elections on its website. OVEC urged readers to “Vote, and then dog the officials with calls and letters to let them know we want climate action!”

“Whether mainstream media, government institutions, and state and local politicians join us remains to be seen, but waiting is not an option,” OVEC member Randi Pokladnik wrote in an October blog post. “The time is now and it is up to us.”

In January 2018, Kentucky Gov. Matt Bevin called the idea that “mankind is solely responsible and is solely going to be the solution” to climate change “ludicrous.” U.S. Rep. John Yarmuth (D-Ky.) is projected to chair the House Budget Committee, a key position for climate-related spending. According to the Huffington Post, Yarmuth has indicated a willingness to work on new climate change legislation, but other Kentucky legislators have denied climate change.

“Climate change will affect everyone,” says Caci Gibson, eastern organizer for the Kentucky Student Environmental Coalition, citing recent flooding and changing agricultural seasons as impacts in Eastern Kentucky. “We can look at these reports and use them to galvanize real change.”

The federal climate assessment warns that Tennessee’s healthcare and transportation systems are at particularly high risk from climate-related impacts, and there is no climate action plan for the state. Governor-elect Bill Lee has not issued a clear statement on climate change, but several of the state’s U.S. representatives deny human impact on climate change.