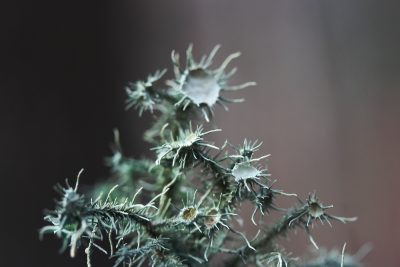 Ethical wild harvesting practices are necessary for the slow-growing bushy beard lichen, above. Only harvest this fructiose species from the forest floor after high winds blow it from its canopy habitat. Photo by Lisa Kimmerling

Lichen grows at the edge of life: faces of rocks, veneer of tree bark, crust of dry soil. From lush forests to arid mountaintops, more than 20,000 species of lichen cover up to 6 percent of the Earth’s surface.

An ancient life form, lichen grows in diverse patterns. The most common types are fructiose, which is shrubby and branching; crustose, which appears as if painted onto rocks; and foliose, which resembles leaves.

One can encounter lichen on a barren rock face and over time find fertility in its wake. Foliose lichen expands when wet — attaching itself tightly to the rock — and then contracts when dry, which causes miniscule flakes of the rock to break off. And so begins a process of soil formation.

Laurence Cole, a community choir elder, was so moved by this small miracle that he wrote a three-part choral hymn to lichen, which begins: “Oh lichen, oh lichen, turning light and stone into flesh and bone.”

Lichen is composed of fungi and algae, which depend on each other to live. While the blue-green or cyanobacteria algae within lichen may thrive elsewhere, most fungi in lichens cannot survive on its own.

As lichen evolved, the process helped to create primordial soils on Earth for nearly 2 billion years before those soils were capable of supporting plant life, according to an article on East Antarctica published in Scientific Reports in February 2018. The scientists looked at cracks within rock where cyanobacteria and fungi preceded the formation of lichen, all of which transformed rock into the building blocks of soil. And why does a rainy day seem to make lichen glow? 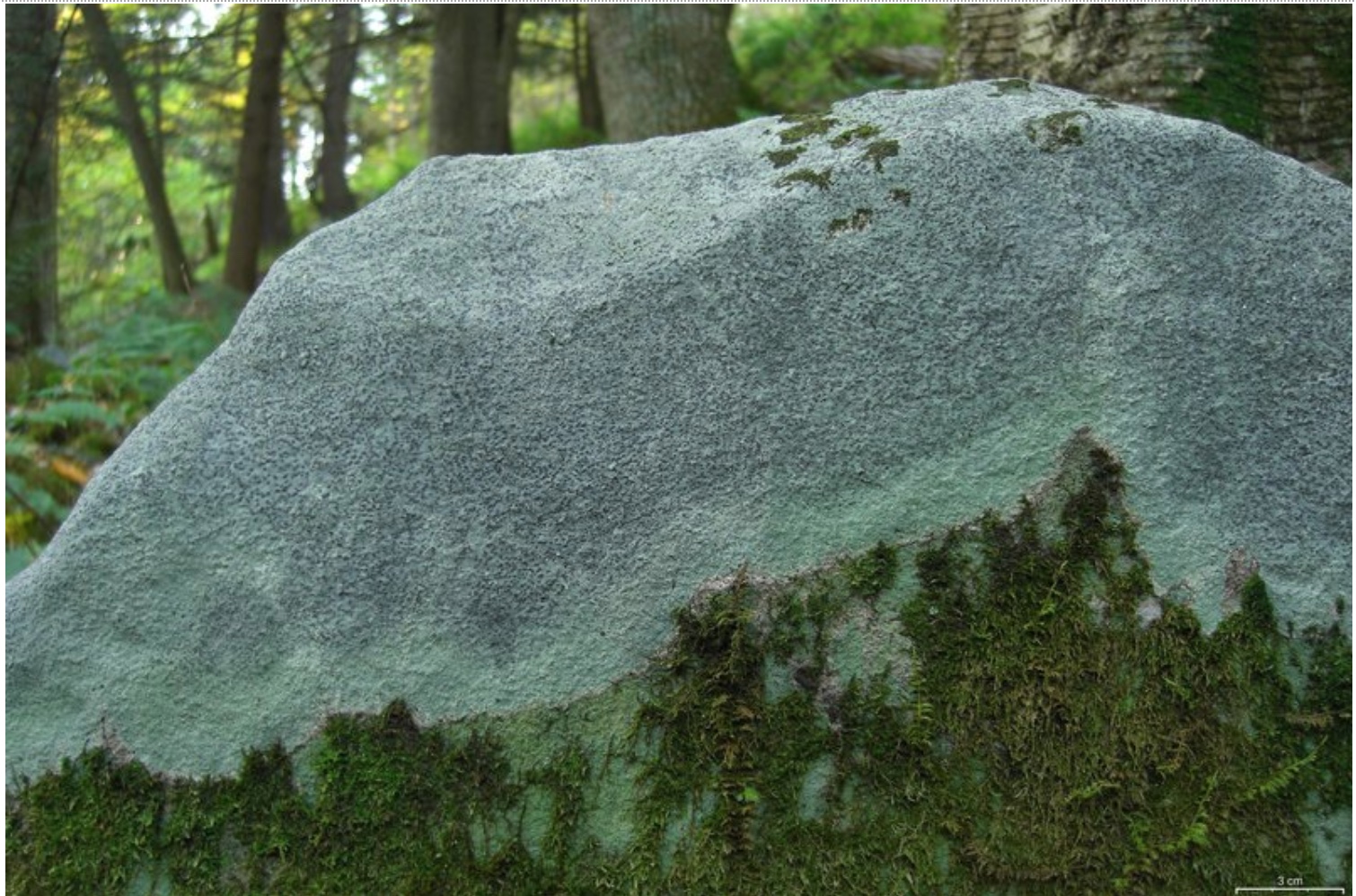 The blue-eyed lichen, or Porpidia albocaerulescens, is a rock-hugging crustose lichen that brightens to a cerulean green upon a rain spell. Photo by Jason Hollinger

Luke Cannon, naturalist and founder of outdoor education company Astounding Earth, connects this phenomenon to lichen’s symbiotic nature. During misty and cloudy conditions, the thin fungal layer on the outermost edge of the lichen turns transparent to allow photosynthesis, he explains. This layer turns opaque in dry periods and acts like a blanket of protection for the algae.


Cannon leads educational nature hikes in the woods around Asheville, N.C. Lichen inspired him through a meditative practice called sit spot, which involves sitting in the forest for periods of time, fully present to one’s surroundings.

“I was able to see more of what is directly in front of me, which included the lichen and mosses and a number of other small, magnificent discoveries,” Cannon says. Noticing led to studying, and Cannon found himself peering at lichen under a microscope one day.

He found other minuscule creatures, such as the affectionately named water bear, or tardigrade, famous for clinging to life on deep sea vents. He notes that this “amazing, mysterious microscopic world” contained within lichen is most diverse in unpolluted areas.

Lichen is sometimes called the lungs of the forest, for it serves as an indicator of air quality. Some species are especially sensitive to nitrogen and sulfur pollution from vehicles and agricultural and energy industry emissions. Most diverse and in highest number in remote areas, these lichen species survive on the air and rain.

A hand lens and an identification guide open the door to learning about sensitive lichen species. The West Virginia Department of Natural Resources provides a guide for the state at tinyurl.com/wv-lichen. Explore the U.S. Forest Service lichen and air quality database at tinyurl.com/lichenusfs.

At North Carolina’s Mt. Mitchell State Park, a 2017 study found that at least four and as many as 16 lichen species have disappeared from the area since the 1970s. Mt. Mitchell, like many high-elevation peaks in Central and Southern Appalachia, is exposed to acid rain, which falls from airborne pollutants traveling from the Ohio and Tennessee River valleys.

Lungwort lichen, Loberia pulmonaria, resembles lungs in its branching form, hinting at its need to breathe clean air, and thrives far from industry. Green algae and cyanobacteria, a photosynthesizing bacteria, combine with the fungi to create emerald tones.

Also sensitive to air pollution, Usnea is a diverse lichen genus with more than 350 species worldwide. Its traditional folk uses center around medicine, and this is a lichen Cannon enjoys using at home. Usnic acid, a plant compound found in Usnea species, is lauded for its antibacterial activity.

A 2017 article in the Journal of the American Herbalists Guild details these findings, noting that this compound is the most widely found phytochemical across lichen species. The region’s biodiverse mountains harbor not only medicinal lichen, but also species found nowhere else — and there are indeed at least two endemic Appalachian lichen.

A recently discovered endemic species found on the North Carolina-Tennessee border was named in honor of Dolly Parton: Japewiella dollypartoniana. Look for it on the Appalachian Trail in the Unicoi Mountains.

Some lichen can dye natural fibers, and select birds liken to Usnea as a nest bedding. These tiny, symbiotic life forms weave a texture of togetherness that is only waiting for a closer look.