Cost of Coal Mine Cleanup

Despite problems with the current system, coal companies are being granted more leeway in paying for mine reclamation

At the edge of Tennessee’s most recent mountaintop removal coal mine, silk flowers and overturned vases lay amid gravestones in a 128-year-old cemetery, yards from the mine’s permit boundary. Mist from a rainy April day dots the bright petals. Beyond the still-in-use cemetery, ponds of gray sludge hold sediment and runoff from the mountain-turned-rubble. 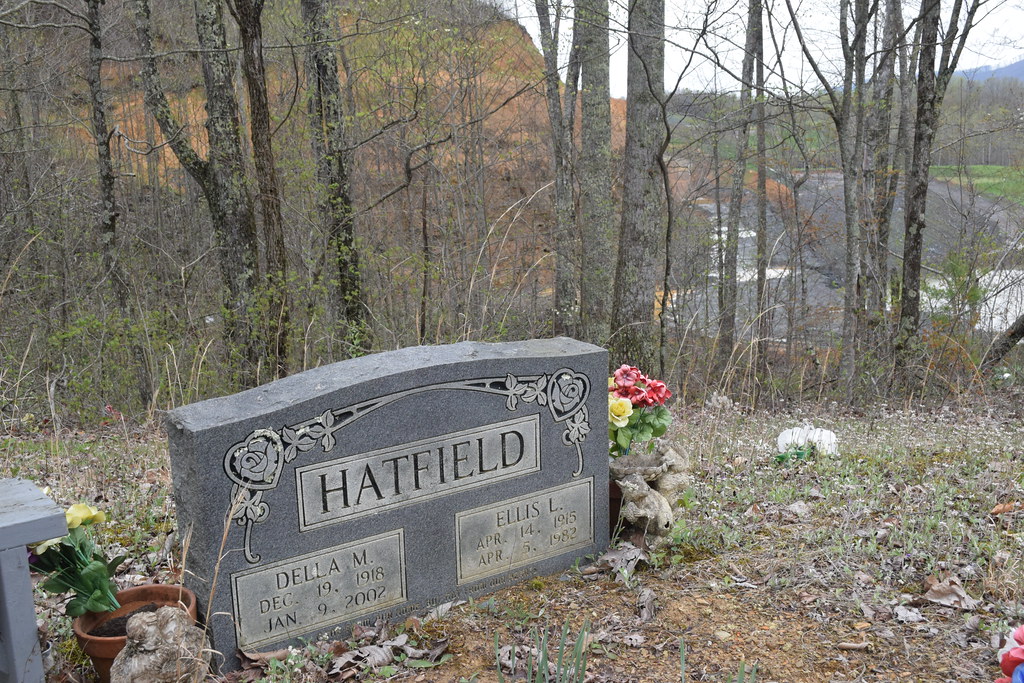 “They’ve done this since November of last year; that’s how fast they move,” says DJ Coker, a Campbell County, Tenn., resident and member of nonprofit group Statewide Organization for Community eMpowerment. “It was like any other mountain, just look around. It was naturally flowing. Now it’s that.”

Below the ridge and a half-mile beyond Cooper Ridge mine’s permit boundary sits Clairfield Elementary School. According to a local doctor who asked not to be named, 70 to 80 percent of the school’s approximately 100 students have a breathing disorder. Coker expresses concerns about how a hauling route spraying gravel and coal dust into the air will affect the children.

Coker and others visited the Claiborne County, Tenn., mine to test the water quality and see if Kopper Glo, the mine’s operator, was properly managing sediment runoff from the recent coal mining activities. As of this March, only 11 acres of the nearly 1,500 acres permitted for the mountaintop removal mine were disturbed. By the time mining is finished, the land will likely look completely different — and Coker is skeptical about the efforts coal companies put into meeting requirements to restore the land to its previous state.

“They’ll throw grass seed down, and then they’ll plant random trees that don’t even belong here and hope for the best,” Coker says. “They’ll make a mountain out of dirt that’s not even a mountain, it’s just a dirt hill.”

The federal Surface Mining Control and Reclamation Act of 1977 and corresponding state regulations include requirements for reclamation, including regrading the land, replanting vegetation and addressing any remaining water pollution. But these requirements only work well when properly enforced by regulators.

Coal mines opened after the federal surface mining law went into effect have been required to post bond money to ensure that regulatory authorities will be able to reclaim the land after mining if the operator fails to do so. A company can receive the full bond amount back as long as an inspector approves the reclamation results.

But because reclamation can be expensive, especially when unforeseen pollution issues arise, companies have a financial incentive to do the bare minimum, and they will often choose the cheapest method of reclamation and even postpone the process for years.

Coker points to a former coal mine on a mountain some distance away, where it looks as if someone had sliced out a square of trees and left patches of green and tan grass in its place — no substitute for the rich forest that had once been there.

“People will be like, ‘well, they did what they could.’ And that’s not the case,” Coker says. “They could’ve done better, they could do better. But they don’t, and people just accept it.”

However, community members like Coker can request citizen inspections and put pressure on inspectors to identify problems and hold companies accountable for land restoration. According to Coker, if people didn’t watch every step of the way, companies “would leave it the way it was and not try to reclaim it.”

“The Earth gave [coal companies] something to make money with,” Coker says. “The least they could do is make the Earth look like it was before they destroyed it.”

After the Mine Closes 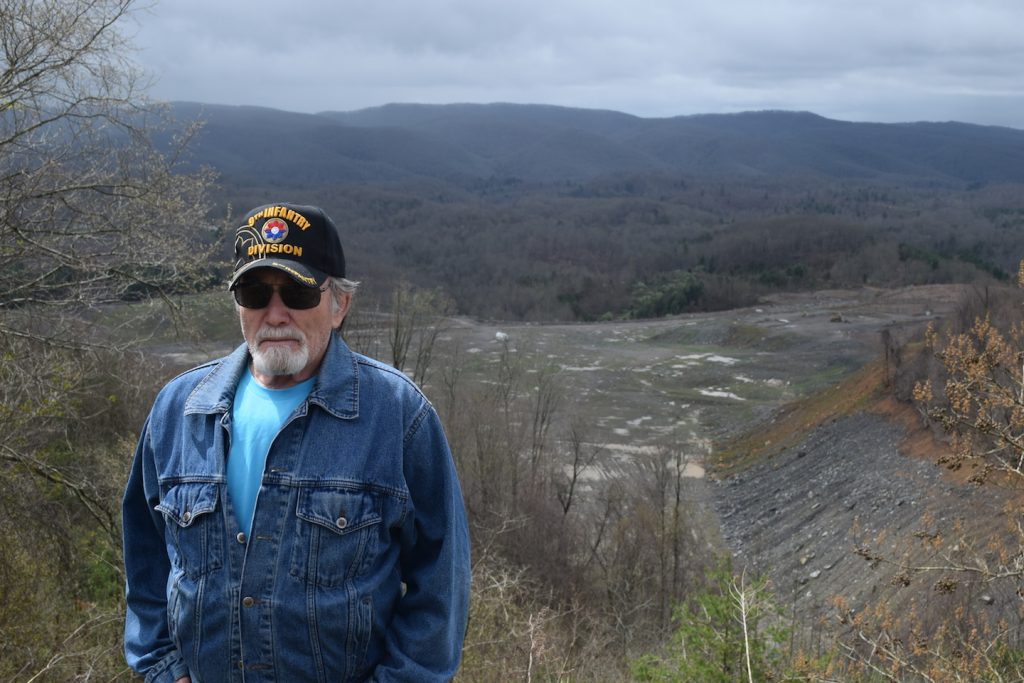 Larry Bush by a strip mine near his home of Exeter, Va. Photo by Kevin Ridder

Save for his three years of service in the Vietnam War, Larry Bush has lived in the mountains of Southwest Virginia his entire life. A coal miner for 13 years and a federal mine inspector for 13 years after that, he has seen his community transform over the decades — and not for the better. On a park bench in the small town of Appalachia, Va., Bush recalls hearing there used to be 35,000 people a day going through the town.

“Every building was full. You could go at 3 o’clock in the morning and get a haircut,” he says. “They had bars, they had that hotel up there, and everything was just booming all the time, 24 hours a day. And now, half the buildings are — they’re gone, deserted. No industry or nothing to bring them back.”

To Bush and other residents of nearby Exeter, Va., the bleak moonscape of the massive coal mine adjacent to the community is a daily reminder of the lasting effects of a dying industry.

“To be able to look back from when I was 6, 7, 8 years old and know what it was back then and see how it is now … just depresses the hell out of me — and a lot of other people too, I’d assume,” Bush says. “But I don’t want to go nowhere else, you know … I’d like to see it made better, as best as it can be made.”

The original intent of the 1977 federal mining law was to accomplish the reclamation Bush and Coker hope for, but this does not always happen. When the coal market was stronger, many states allowed coal companies to accumulate huge amounts of reclamation liability, putting off the physical restoration work longer. Now, with the industry lagging and many mines sitting inactive and unreclaimed, regulatory agencies have little choice other than to negotiate with coal companies for whatever amount of land restoration they can get — or make taxpayers pick up the reclamation cost.

In 2017, Central Appalachian strip mine coal production was approximately 74 percent lower than its high point in 2008, according to data from the U.S. Mine Safety and Health Administration. As the coal industry overall has declined over the past several decades, the lack of coal company funds made available to clean up the mess has become apparent, according to an April report released by The Alliance for Appalachia, a regional coalition of nonprofit organizations including Appalachian Voices, the publisher of this newspaper.

The report names two central problems with the bonding system. The first is simply that bond funds are often not high enough to cover the actual cost of reclamation, especially long-term treatment of polluted water. The second problem involves alternative bonding methods like self-bonds and pool bonds.

Self-bonding is an inherently risky practice that follows the philosophy of “too big to fail.” Companies that employ this strategy merely have to prove that they have the financial resources to cover all reclamation, and do not have to post a bond. If one of these companies goes bankrupt, however, then taxpayers could be fully responsible for the cleanup costs.

From August 2015 to April 2016, three of the nation’s largest coal companies, with approximately $2.4 billion combined in self-bonds, went bankrupt, putting taxpayers at risk of picking up the tab. In August 2016, former President Barack Obama’s administration issued an advisory to state regulators to “not accept new or additional self-bonds for any permit until coal production and consumption market conditions reach equilibrium, events which are not likely to occur until at least 2021.”

Since mid-2016, the amount of reclamation costs that companies hold in self-bonds nationwide has dropped 75 percent, according to data compiled by Climate Home News. But last October, President Donald Trump’s administration rescinded Obama’s advisory, creating the possibility for a resurgence of risky self-bonding. Shortly after emerging from bankruptcy, Peabody Energy’s CEO stated in March 2017 that the company “believes it continues to qualify for self-bonding” and will consider using it in the future “should circumstances warrant.”

While several states are moving away from the practice, Virginia is struggling to because of the roughly $25 million held in self-bonds by A&G Coal Corporation, which is owned by West Virginia Gov. Jim Justice.

Virginia also has a troublesome situation with pool bonds, where a group of companies put a fraction of their estimated reclamation costs into a shared pool of funds. If one of these companies goes bankrupt, funds from the pool are put forth to cover reclamation costs — but if several companies go under at once, the pool could quickly dry up.

Tennessee Gov. Bill Haslam recently signed a law intended to transfer coal mine regulatory authority from the federal government to a new state division. The law would also allow valley filling, a common practice in mountaintop removal coal mining in which all of the rubble created by blasting is dumped over hillsides. In the long term, funding for the new regulatory division would rely partially on non-guaranteed federal grants and partially on coal industry production taxes. Tennessee only has three mines producing coal, which environmental groups expect would lead to public tax dollars making up the difference.

As of April 2017, Jim Justice had accumulated roughly $134 million in mine cleanup costs he has yet to address in Virginia, according to the state’s Coal Surface Mining Reclamation Fund Advisory Board. This dwarfs the state’s bond pool, which contains approximately $8.8 million, according to Climate Home News. The inactive coal mine behind Larry Bush’s community is owned by Justice.

“Virginia is in between a rock and a hard place,” says Matt Hepler, Central Appalachian environmental scientist with Appalachian Voices. “They are bending over backwards to help Justice stay afloat, because if he sinks, the pool bond fund sinks with him. So they are working to get as much reclamation out of him as they can, even though he is way behind on his already-agreed-to commitments and is racking up new violations.”

While he doesn’t think the region will ever be the way it was before or during coal’s heyday, Larry Bush believes properly reclaiming the mined areas with an eye on increasing tourism would go a long way to getting communities like his back on their feet. To do that, however, Bush says “we need to hold [coal companies’] feet to the fire” when it comes to enforcing reclamation efforts.

“Primarily, I think the companies ought to be held to task,” Bush says. “Right to the very last shovel of dirt that’s pushed up.”

“If you take out an oak tree, put back an oak tree and make it grow,” he adds.

Correction June 7, 2018: The print version of this article incorrectly stated that the author visited the Cooper Ridge coal mine in March. He visited in April.