In Celebration of Vickie Terry 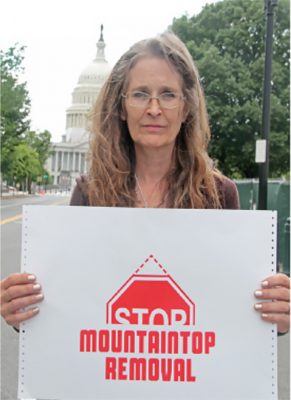 I remember the first time I was up on that ridge, the cool breeze coming from the holler below, the warm sun peeking through the trees of that fingerling on top of her mountain in Rose’s Creek. If I could think of who Rose might be, she was entwined with Vickie Terry.

One summer day in April or May of 2009 Vickie walked me from her house through the trees to where a camping spot was setup. She was telling me that this was turning into Rose Ridge Retreat, a beautiful and sacred place for people to meet mountain and mountain to meet people, so they may never leave each other’s hearts, as this place could never be separated from hers (or hers it).

The first time I really got to know her was in 2006 at an organizer’s meeting for the Appalachian Community Economics conference to build bridges between residents of Central Appalachia, academics, environmentalists, community organizations and activists. She immediately realized as a woman, mother, Appalachian resident of Tennessee, mountain advocate and representative of rural community organizations, that her voice was a minority not only at the table of this organizer’s meeting for a conference, but for her community, community and nation.

That day, I heard her voice go from unsure and curious to powerful with the realization, right and need to proceed in life with that power, vigor and mountain love. She began to ask “why are all these people who don’t live where I am from getting to say what happens to my place and community, from universities to politicians in Washington, D.C.?”

She is that Rose of Rose’s Creek, and as they grew together for decades, and when she found her voice, she belted it out and confronted those who may not have realized the importance of her place and environment to the world. She realized that those soft petals and fragrant wisps of scent you get in the woods from that wild rose have roots that stick and grow and grow entwined together.

I know Vickie as a woman with a strong sense of family and an undying love for the protection of her home and community. She saw how the water in her mountains were the springs to the life and thriving water down river; and that the mountains being torn down resulted in the pain of not only her place and family but to those who eventually used that water in the cities below. And time and time again it just mystified her as to how this was not obvious to those ripping out the very resources that gave life to a healthy environment and clean water for all.

Her hearth was her family and their love was built together on their mountain. This undying glow grew into Rose Ridge Retreat, where her family hosted college students and locals alike who came to visit and to help build her dream on their ridge.

She gave strength to her children, grandchildren and other women and men who needed to hear how valuable they are to the world. She became an advocate for her mountain, her people and her region to champion their worth and the absolute value of their knowledge of place on every mountain and in every holler of Central Appalachia and beyond. Without her voice, her love and her symbiotic connection to land and people, the world would realize so much less the power of Appalachian women and the importance of the Appalachian Mountains for generations to come.

These are just a few words Alliance members used to describe and memorialize Vickie Terry, a community leader and mountain protector who graciously shared her sunshine with so many of us.

Vickie attended Week in Washington, hosted by the Alliance for Appalachia, several times over the years to share her story and experiences of living in a community ravaged by mountaintop removal coal mining with legislators and officials at the nation’s capitol. She found her fight and her voice through community organizing, and along the way she inspired others to do the same.

Vickie made sure that her family and friends were always smiling. Even through her year-long battle with lung cancer, she loved and lived every moment she was given and inspired the rest of us to do the same. We are heartbroken to say goodbye, so instead, we’ll say see you later, Vickie, on another plane, in another life just as sweet.

Through her hard work, Rose Ridge Retreat came to life as an outdoor living-learning classroom to raise awareness of sustainable living practices in Clairfield, Tenn. The retreat has an outdoor kitchen, space for camping, and hosts workshops on gardening, food preservation and home site planning. Vickie started building a sustainable and diverse environment and economy right in her own backyard; her leadership is a testament to what we envision for our communities across the region.

While we remember our keepers of the mountains, Vickie and Carol and Larry and Judy and Dianne and so many other movement leaders with endless love, we are hurt and we are outraged. We are tired of saying goodbye to our loved ones far before their work is done, long before they deserve to die. We know the ills of mountaintop removal and the impacts of extractive industries on our health. These mountain leaders have paid the ultimate price, and we owe it to them to continue speaking the truth and fighting for the futures we believe in.

If she touched your life, or if you feel called to show your support, please consider donating to Vickie’s memorial fund, which will help her family move through this transition.