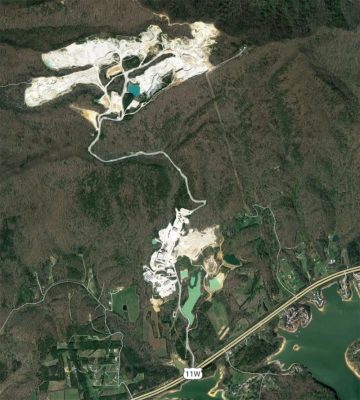 A step in oil and gas extraction that often goes unseen is the mining of frac sand, a necessary component in the fracking process.


Frac sand is a high-purity silica sand made from durable, rounded quartz grains. Silica sand mining is underway at quartz formations across the country.

In fracking, wells are drilled into oil-laden rock shales, and water laden with chemicals, thickeners and sand is pumped into the wells at high pressure, creating expansion and fractures in the rock.

This is where frac sand comes in. When the water flow stops, the cracks in the rock deflate and are propped open by millions of grains of frac sand. These porous cracks allow oil and gas to seep through the cracks and fill the wells.

Though frac sand mining is most common in quartz-rich regions like Wisconsin, areas across Appalachia are also home to frac sand mines.

According to its website, Short Mountain Silica has been mining and manufacturing silica products since 1988 and began producing frac sand in 2012.

Tony Poole works as chief engineer at the PBS WETP-TV tower, located on Short Mountain Silica Road. Poole estimates that the tower is a mere 600-700 feet from the mine.

In his seven years working at the tower, Poole says he has watched the mine grow. The mine has become increasingly close to the transmit tower, and he has seen expanses of forest disappear.

Poole has heard stories from coworkers about problems with the mine years ago. Explosives would unearth rock formations, which sent debris flying and damaged the nearby road, and dust and noise pollution was a much larger problem. According to Poole, his colleagues estimate that these issues were mostly resolved about 10 years ago.

What worries Poole today, however, is the habitat destruction the expanding mine has caused.

“There’s a lot of cougar or wildcats running around up there, and lots of deer up there, and you haven’t seen them in a few years,” Poole says. “Wildlife is just disappearing.”

Short Mountain Silica did not respond to requests for comment.